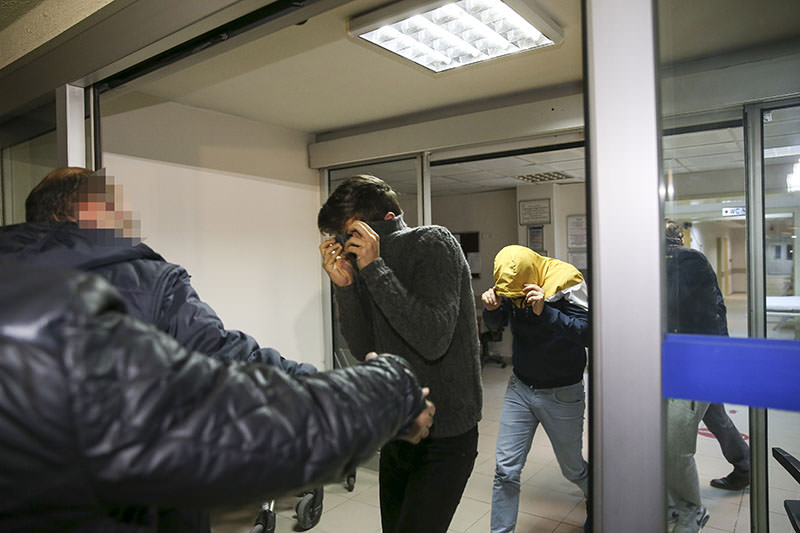 | AA photo
by Daily Sabah Feb 21, 2016 12:00 am
Twenty-one suspects detained in connection with the Ankara bombing were sent to an Ankara courthouse on Sunday morning. The suspects were first taken to a hospital for a health check-up and then to the courthouse.

Later on Sunday, 14 of the suspects were referred to court to be charged and seven were released. On Friday, the police said that the number of detainees held across Turkey in connection with Wednesday's bomb attack in Ankara had risen to 21.

PKK-affiliated terrorists exploded a device in the Turkish capital on Wednesday adjacent to military vehicles, killing at least 28 people and injuring dozens more. After interrogation of the suspects, sources told Daily Sabah that they found evidence of links between the suspects and the PKK terrorist organization.

Prime Minister Ahmet Davutoğlu has repeatedly emphasized that the attack was carried out jointly by a Syrian-national People's Protection Units (YPG) member with assistance from PKK members based in Turkey. The YPG is the armed wing of the Democratic Union Party (PYD), which is the Syrian branch of the terrorist PKK group.

Davutoğlu said on Saturday that Turkey is set to introduce new security measures. "We are going to make changes in the matter of security," he said after a five-hour meeting in the capital Ankara with security chiefs, adding that a counterterror "action plan" was being prepared.

The prime minister said that more security forces would be deployed and their presence would become "more visible" as part of the new plan, but he also called on citizens to support and participate in the new security plan.

"Terrorist groups aim to cause trauma and chaos among the population. We must all assist the security forces," he said. "No security efforts can succeed without the support of the people," Davutoğlu added.