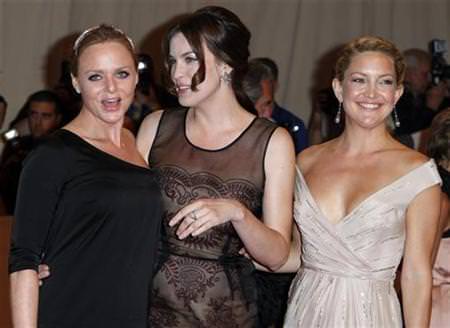 Through the window of Moscow's premiere department store, home of her new boutique, Stella McCartney can look out at the glitzy shop that, at the peak of Russia's lavish spending, used to be all hers.

The return of the British designer, who on Thursday night opened her concession at TSUM -- prime retail space only steps from fabled Red Square -- cements the revival of the country's love for luxury.
The comeback, via a partnership with TSUM, was more subdued than the grand opening of McCartney's own store in 2007, which closed after only 18 months when the financial crisis halted Russia's seemingly insatiable demand for expensive clothes.

"The current global economic environment has made these companies thrifty. They are not willing to spend that much on a market that may prove risky and volatile for their brand," said Ekaterina Petukhova, head of Esper Group, a Moscow-based fashion consultancy.

Russia's luxury market is set to grow by 16 percent this year, significantly outpacing the world's 10 percent growth rate, according to Esper Group.

This is a huge improvement over the past couple of years when the exuberant spending of the Russian customer -- whose wealth is often rooted in the country's vast natural resources such as oil, gas and metals -- nearly halved.

But the expected growth this year is still some distance away from the gains pocketed by famous designers before the crisis.

"We speak of a quality revival of the market, i.e. customers shopping for luxury and frequenting stores but the foot traffic is still below the pre-crisis level as well as the average bill amount," Petukhova said.

"The market is waiting for new participants and new openings after the crisis," she added.

A crowd of fashion industry insiders and leggy models gathered for the opening party for McCartney's TSUM concession on Thursday, sipping champagne and eating cheese canopes while some played table football to a soundtrack of Christmas music.

The space was covered in 'Stella Loves TSUM' logos, although the designer herself -- part of France's PPR-owned Gucci Group -- did not make an appearance.

Alla Verber, TSUM's head of fashion, told Reuters sales had picked up in 2010 and that the financial crisis was now a distant memory, although the effects of recent violent riots had taken their toll.

"After the last week with what happened on Manyezh Square, people are a little bit afraid to travel ... to the center of the city, but not because of the crisis," she said, referring to extremist clashes this week.

"We see business picking up," she added.

McCartney's more cautious approach to the Russian customer is also typical of brands that are not at the top end of luxury.

"Russian consumers are still not that literate in terms of high-profile fashion," Esper's Petukhova said.

Prada or Dolce & Gabbana have weathered the crisis well and can still maintain their own outlets, she added.