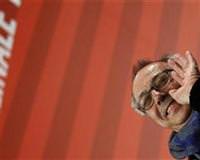 The 61st Berlin film festival will be smaller but more daring than last year, he added, with the competition lineup featuring an animated film in 3D and five debut films.

"There will be many new filmmakers, many female directors ... and technical novelties that we hadn't ever shown before at the Berlinale," said Kosslick, noting that all three 3D movies would be screened on the first Sunday.

"These three movies show that you can really play around with 3D in arthouse film."

Hollywood 3D movies such as the sci-fi juggernaut "Avatar," "Alice in Wonderland" and "Toy Story 3" have taken box offices worldwide by storm in recent years, but have yet to gain traction among arthouse movie makers.

British actor Ralph Fiennes' directorial debut "Coriolanus" is among the debut films premiering at the Berlinale.

The Shakespeare adaptation features Fiennes, nominated for Academy Awards for his roles in the "The English Patient" and "Schindler's List."

Another debut film premiering in Berlin will be "Margin Call," a U.S. thriller with actors Kevin Spacey and Demi Moore, showing a 24-hour period at the onset of the financial crisis in an investment bank loosely modeled on Lehman brothers.

"We wanted to take on new people and not just bet on the safe horse," said Kosslick.

The festival runs from February 10 to 20 this year, culminating with the awards ceremony taking place on February 19.

The Berlinale has become a showcase especially for the German industry in the ten years since Kosslick took over.

An unabashed fan of German films, he had led the country's top movie subsidy board and has helped to revive German film with his cheerleading -- a somewhat risky move for one of the world's top film festivals.

Eleven of the 22 films in this year's main selection are German movies or co-productions.

The Berlinale, which also has a reputation for getting stuck into political debate, will screen several Iranian films this year and pay tribute to Iranian director Jafar Panahi, who was sentenced last month to six years in prison.

Panahi, whose film "Offside" won the festival's Silver Bear award in 2006, had been named as a member of this year's jury.

According to Panahi's lawyers, he was jailed by an Iranian court last month for making a film without permission and inciting opposition protests. The court also banned him from writing or making films for 20 years, his lawyers say.

"We will show five films of Panahi in different sections ... and there will be a discussion with Iranian filmmakers about freedom of expression and film production in Iran," said Kosslick, noting that "Offside" would be screened on February 11, to coincide with the anniversary of the Iranian Revolution.

Kosslick also said the debut film by Turkish-German director Yasemin Samdereli, "Almanya," provided an answer to the political debate about immigration and integration that raged through Germany this year.

The comedy tells the story of a Turkish family living in Germany for three generations, returning to Turkey together at the behest of the grandfather.

The 61st Berlin film festival will run from Feb. 10 to 20, with the awards ceremony taking place on Feb. 19
Following are the 22 films in the main competition lineup, along with the production countries, the name of the director and the names of major stars. Six are not in the running for awards
- True Grit (United States) by Joel and Ethan Coen.*

- The Prize (Mexico/France/Poland/Germany), by Paula Markovitch

- Nader And Simin, A Separation (Iran) by Asghar Farhadi

- Tales Of The Night (France) by Michel Ocelot, 3D

- The Forgiveness of Blood (U.S./Albania/Denmark/Italy) by Joshua Marston

- The Future (Germany/U.S.) by Miranda July

* denotes films not competing for prizes