Galliano gets $8,400 fine for anti-Semitic outburst 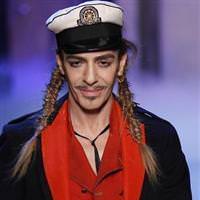 A French court handed out a 6,000 euro ($8,421) suspended fine to John Galliano on Thursday after finding him guilty of anti-Semitic behavior , marking the end in a fall from grace for the former head designer of fashion house Dior.

For Galliano, whose worth is estimated in the millions of dollars, the penalty -- suspended for several years -- avoids any financial burden and is unlikely to constrain his liberty.

The fine, in line with what a prosecutor had recommended in June, falls short of the maximum sentence in such cases of a 22,000-euro fine and 6-month prison sentence.

"Despite the triple addiction from which he was suffering, he was lucid enough to be conscious of his acts," said the tribunal president, Anne-Marie Sauteraud, reading out the court's decision.

The court explained its relatively lenient decision by referring to Galliano's lack of criminal convictions, his previous regard for respect and tolerance and the treatment for drug and alcohol addiction he has sought since his arrest.

She said Galliano had told the court he would have wanted to be present for the verdict, but did not attend to avoid another confrontation with the press.

In addition to the fines, Galliano was sentenced to pay more than 5,000 euros in legal fees, plus 1 euro in symbolic damages, to each of the plaintiffs and civil parties in the case.

Yet the British designer has already paid for his behavior late last year at a chic Parisian bar -- where he was filmed hurling anti-Semitic insults at a couple -- by losing his top job at Dior and his stake in a franchise named after him.

The damage to his reputation, once among the untouchable in the world of high fashion, has also been dire, with peers ranging from Chanel designer Karl Lagerfeld and U.S. actress Natalie Portman blasting his behavior in public.

Galliano, reported to have been through two rehabilitation programs, in Arizona and Switzerland, has made few public appearances since he appeared before a packed Parisian courthouse last June, speaking in a tiny voice about his triple addiction to alcohol, sleeping pills and tranquilizers.

The image of a man who, in his own words, had become a "ghost of himself" was enough to appease at least one plaintiff in the case, Geraldine Bloch, her lawyer told Reuters.

"She saw a man who was destroyed physically, a sick man," said lawyer Yves Beddouk. "For her and for me, this is already in the past, he has already been stripped of his status as an icon and that is the real punishment."

"The court's verdict will serve as an example," he added.

WHAT NEXT FOR DIOR?

Galliano, 50, made his first foray back into design last summer when he drew the wedding dress of British supermodel Kate Moss, a close friend.

"She dared me to be John Galliano again. I couldn't pick up a pencil. It's been my creative rehab," the U.S. edition of Vogue magazine quoted him as saying in its September issue.

Later on Thursday, at the Paris leg of the Vogue Fashion Night Out, a global event organized by the glossy magazine to encourage people to shop, fellow designer Jean-Paul Gaultier wished Galliano would return to the fashion scene.

"I really sincerely wish that he does (go back to designing fashion)," Gaultier told Reuters.

"He has an immense talent, he has done wonders... and totally rejuvenated Dior. What happened was a mistake, he has shown with his work that he was not racist."

But the fashion world has already moved on, its focus firmly on the name of the person who will succeed Galliano at the head of Dior's design team after a lackluster autumn/winter haute couture show -- the first without Galliano -- led by his longtime collaborator Bill Gaytten.

Marc Jacobs, currently top designer at Louis Vuitton, a sister brand of Dior within the LVMH group, has been reported to be in talks to replace Galliano at Dior.

"I think this is a great idea if it happens," Emmanuelle Alt, Editor of Vogue France, told Reuters about the possibility of seeing Jacobs join Dior.

"Marc Jacobs is an extremely creative designer who has relentlessly refreshed Vuitton, which is a very classic brand. He is a genius, I like him a lot."