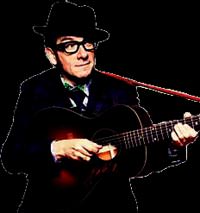 Known in our country best for his songs She and I Want You, Irish musician Elvis Costello will be performing tonight in Istanbul as fans count down the hours.

Costello has performed in Turkey once prior, in 2005 for the International Istanbul Jazz Festival and tonight will be the famous musical figures second concert foray in Turkey.
The concert, held at the Maslak Tim Show Center, will begin at 21:30. Beginning his musical career in 1977 with the album entitled My Aim Is True, Costello later went on to be known as the second most famous musical act to come out of Liverpool, England.
Lyrics by Elvis Costello are regularly compared to those written by Bob Dylan and the performer is most well-known for his successful fusion of the rock, pop, soul and jazz musical styles.
Of course, Costello's contribution to film soundtracks is also a significant factor in his worldwide success.
In Turkey, the performer is most loved for his songs 'She' and 'I Want You', both which were film soundtracks. We first heard the song 'She', in Julia Roberts' unforgettable film 'Nothing Hill', while 'I Want You' was a song in a 1998 Michael Winterbottom film of the same name.
Like a number of other fellow Irish musicians, Elvis Costello is also known for his political stance. Costello refrains from hiding his ties of affection to the organization pursuing Ireland's independence, the IRA, however his political activism is not limited to Ireland. In 2010, the musician cancelled a concert he was scheduled to play in Israel. Costello's reason for cancelling was stated as being due to the violence prone policy Israel engages against Palestinians.