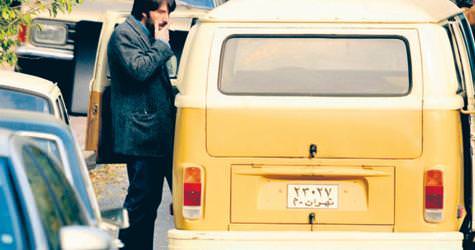 Shooting for the film ‘Argo’, which will depict the hostage crisis that transpired in Iran in 1979, has begun. Istanbul’s prestigious Etiler area is just one of the locations of the shoot and at present, two streets in the neighborhood have been closed off to traffic. In addition, the streets have been adorned with signs in Persian and vehicles have been outfitted with Iranian license plates.

Famous actor Ben Affleck is not only directing but also starring in the film 'Argo' which is scheduled to shoot a number of scenes in Turkey. Affleck arrived to Istanbul a while back in order to scout locations; he is back in the city this time however to shoot. The film Argo appears to be a pet project of sorts for the world famous actor and is scheduled for release in 2013. The film will depict the events that developed following the hostage crisis that transpired in Iran. The following are a number of notes regarding the film 'Argo' which also has actor George Clooney signed as producer:
One of the shooting locations in Istanbul is in the Etiler district, in which streets have been made to resemble those in Iran. Two streets in Etiler have been shut down entirely to traffic and pedestrian access.
The vehicles used in the shoots have been adorned with Iranian license plates. The buildings have been decorated with signs in Persian.
There was an approximate 200-member set crew consisting of both Turkish and international staff.
A number of temporary restaurant displays including a Doner shop and a dessert display were set up on the streets for filming.
Shooting began in the early morning hours and went on until it got dark at night. Affleck plans to move shooting on to the Grand Bazaar once the Etiler filming is completed.
Affleck's security detail is being provided by Çağdaş Agu, the same security guard who was assigned to protect Monica Belucci.

AFFLECK TO PLAY CIA AGENT
The film 'Argo' will be an adaptation of an article released in Wired in 2007, entitled How the CIA Used a Fake Sci-Fi Flick to Rescue Americans from Tehran. The production will focus on the rescue of six American embassy employees who were taken hostage during the CIA's 1979 hostage crisis in Iran. Ben Affleck will not only be directing the flick but also starring as CIA agent Tony Mendes.

HE COULDN'T MOVE A MINIBUS
Ben Affleck, who will be spending 15 days in Turkey, drew attention due to his relaxed attitude on set. Between shoots he would smoke cigarettes. At one point an old model Volkswagen minibus used for the shoot wouldn't start, and he attempted to push the car to get it moving, however was unsuccessful.