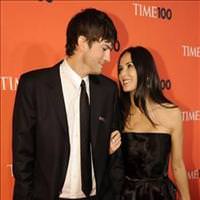 Film and television stars Demi Moore and Ashton Kutcher said on Thursday they are ending their marriage after six years, breaking up one of the most widely followed May-December romances Hollywood has seen.

The marriage between Moore, 49, and Kutcher 33, has been in trouble since late September when a San Diego woman went public about a brief affair she had with Kutcher, a star on CBS television comedy "Two and a Half Men," during a weekend of partying in the southern California city.

"It is with great sadness and a heavy heart that I have decided to end my six-year marriage to Ashton. As a woman, a mother and a wife there are certain values and vows that I hold sacred, and it is in this spirit that I have chosen to move forward with my life," Moore said in a statement.

The star of films such as "Ghost," "G.I. Jane" and "Indecent Proposal" also asked for "compassion and privacy" and said it was a "trying time for me and my family.

Moore released her statement first and Kutcher quickly followed on Twitter where both were early converts to the social network, posting messages and pictures about their personal lives. Ashton has more than eight million followers and Moore has more than four million.

"I will forever cherish the time I spent with Demi. Marriage is one of the most difficult things in the world and unfortunately sometimes they fail. Love and Light, AK," Kutcher tweeted.

Moore was married twice previously, the first time to singer Freddy Moore and the second to film star Bruce Willis, with whom she has three children. They divorced in 2000.

She began dating Kutcher a few years after breaking up with Willis when Kutcher was a rising star on the TV sitcom "That '70s Show."

Their affair immediately became fodder for the tabloid press because of their 16-year age difference, but in the months and years after their wedding, it seemed they were living happily ever after.

But Hollywood can be cruel to celebrity couples and speculation about Kutcher straying from his marriage began to surface earlier this year. In September, Sara Leal, a 22-year-old part-time model told celebrity media that she had slept with Kutcher twice over a wild weekend of partying.

In the past month, Moore and Kutcher had stayed out of the public spotlight and not commented on reports of the affair. They have offered only cryptic posts on Twitter, such as this from Moore on September 23, the eve of their sixth anniversary, quoting Greek philosopher Epictetus: "When we are offended at any man's fault, turn to yourself and study your own failings. Then you will forget your anger."