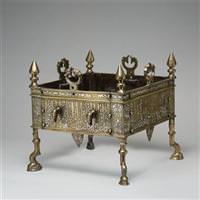 Fifteen renovated galleries offer fresh perspective on the Metropolitan Museum of Art's collection of more than 12,000 Islamic works of art spanning 13 centuries and an area ranging from Spain to India.

About 1,200 pieces of art will be on view at any one time with displays of textiles and works on paper changing frequently due to the sensitivity of these materials to light.

A re-thinking of the Islamic art collection, developed alongside the museum's years-long renovation project, led to the new galleries being named to reflect the range of nations and empires that produced the art.

While the collection was once succinctly termed Islamic Art, the museum now describes the works inhabiting the galleries as "Art of the Arab Lands, Turkey, Iran, Central Asia, and Later South Asia."

The new emphasis on geography grew out of the view that while religion unifies the collection, region diversifies it.

"Islam is not a single lense through which we view and interpret the art," said Navina Najat Haidar, curator and coordinator in the Met Museum's department of Islamic art. "Rather, it's an inverted lense that reveals great diversity."

This multi-faceted approach stresses the immense variety of artistic expression.

The layout of the galleries, with several logical entry points, creates a circular flow, emphasizing the connectedness of the cultures represented by the art.

Colors and stonework typical of the geographical area where the art was made enhance the galleries, setting the art among materials that bring out its diversity.

"The whole space changes as the visitor goes through the galleries," Haidar said.

"The floor plan also connects the galleries to the work of European Orientalists, opening up a conversation between East and West," she said, referring to works by 19th century European artists who drew on their travels to North Africa and Western Asia for subject matter.

A striking, unifying element of the Met's new galleries is calligraphy, a form of artistic expression that acquired great prestige because it was used to transcribe the Koran.

The museum has an encyclopedic collection of the many styles of Arabic calligraphy, which was used to represent non-Arabic languages as well as Arabic. It appears on ceramics, manuscripts, metal work, coins and architecture.

"The physical act of writing was highly respected and the status of calligraphers was extremely high," Haidar said. "Calligraphy is a great backbone for the collection."

The dismantling of the museum's Islamic art galleries in 2003 for renovation and expansion let the museum's staff apply the latest scientific conservation and restoration techniques to manuscripts, fragile glass objects and rare carpets.

It also gave curators and scholars from inside and outside the museum a chance to re-examine objects, explorations that sometimes led to new ways of displaying the works.

For instance, when the museum took down the Damascus Room, a wood-paneled reception chamber from a private house in Damascus built in 1707, its staff studied it closely and discovered a numbering system on the panels.

"That gave us a clue to its original configuration so when we reinstalled it, the entrance door and windows were returned to their correct location," Haidar said.

The current installation of the Damascus Room also restores the calligraphic text that ran from right to left on the upper part of the wall to its proper sequence.

Museum officials expect new visitors to the galleries to include the growing communities of people from this part of the world who now live in New York City.

"Those communities should feel very proud to see their heritage being recognized," Haidar said. "Whether they are from Morocco or Uzbekistan, in the work and in the explanations of the work, they will find themselves somewhere. They can bring their children and families; that's a very important thing."