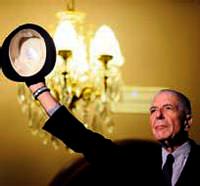 Singer and poet Leonard Cohen will release his first studio album in eight years in January following the success of his comeback world tour, his publicists said on Tuesday.

Called "Old Ideas", the album has 10 songs looking at love, sexuality, loss and death and is described as the most overtly spiritual of the singer's 40-year recording career.

Cohen, 77, best known for haunting 1960s folk songs like "Suzanne", "Bird on a Wire" and later "Hallelujah", retreated from the world in the mid-1990s to become a Buddhist monk.

But he embarked on a world tour from 2008-2010 that took him to 31 countries and brought glowing reviews.

Recording of "Old Ideas" began in January 2011 but early versions of some of the tracks, including "Lullaby" and "The Darkness" were performed during Cohen's recent tour.

"Old Ideas" is set for release on January 31, 2012. The cover design and drawings are Cohen's own.