'Istanbul is experiencing a revolution of the arts' 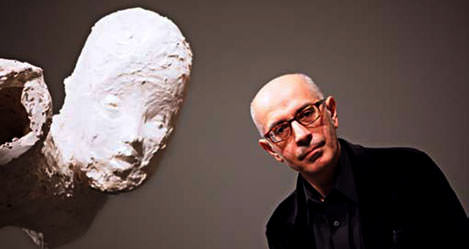 General Coordinator of 6th Contemporary Istanbul and SABAH writer, academic Hasan Bülent Kahraman states, "What Turkey has experienced in the arts over the past ten years is a revolution.”

Since the 1980's Hasan Bülent Kahraman has been an academic and art critic that has been contributing to the world of art in Istanbul. This year, Kahraman has taken on the duty of coordinator for the 6th Contemporary Istanbul art fair. In addition to all of his other accolades, Kahraman has also undertaken the curatorship of the White Seeds (Beyaz Tohumlar) exhibition at Akbanak Sanat. SABAH writer Hasan Bülent Kahraman has created the exhibition, which will run until December 31st, by choosing a selection of Belgium Modern artist Johan Tahon's works. The exhibit also provided us the opportunity to discuss with Kahraman the progress of the modern art world in Turkey and where we are now.
THE 21st CENTURY HAS BROUGHT ON GREAT CHANGE: "There has been a significant change in the arts in Turkey from the year 2000 till now. I find that what has happened in Turkey in the arts over the past ten years is just as important as what happened in Turkey in the 1850's when we were introduced to Western-style art. We are a society that has been extremely restricted and controlled when it comes to the Western style relationship with the arts. We have always had a problem with inconsistency and incongruity. Whereas the works produced in the modern art of today are the same as those created all over the world. In other words, whatever the technology used to make a cell phone is more or less the same. Therefore, it is possible to consider the developments that have transpired over the past ten years as a revolution in the arts."
THE FAIR IS A SIGNIFICANT INDICATOR: "In my opinion the accumulation we have gained over the past ten years will pave the way for very serious advancement in the next ten years. Contemporary Istanbul provides one of the most significant grounds for this development. The most important galleries in the world are showing works, while the most important collectors are purchasing them. This shows that Turkey has acquired a significant place in modern art. This capital is an extension of movement. Without the support of capital, art is unable to neither progress significantly nor become universal. It is one thing for an artist to create what they know in their own cocoon. However during the era of the House of Medici, they were either behind Michelangelo or art was produced in the palaces. We have reached that point again today. Contemporary Istanbul is an event born from globalization. Its existence is a significant contribution to the progress of modern art in Turkey.
A LACK OF CRITICS: "When I got into this work in the years 1984-1985, there was none of this. It wasn't even possible to imagine such an environment. However, there is still something missing. That is the lack of critics. Within the next few years there will be a big explosion of art critics in Turkey. That is because, when capital enters this area, it is inconceivable that critics would not follow. Because, that capital is very careful. They would only decide what or what not to buy and in what to invest through the aid of a consultant or an art critic."
ART IS NOT NATURAL; IT IS PRODUCED THROUGH CONSCIOUSNESS
"I met Johan Tahon last year while I was working with Ergin İnan. I had questions in my head regarding why it is that people create art. The concept of tragedy within the art structure interests me very much. When we look at modern art, despite its efforts to deal with very significant questions, we see an artistic aspect that does not form the relationship with tragedy that the classic arts provided nor does it show the same interest. This exhibit deals with the questions of why people do art, who it that creates people and what is it that people do. In this exhibition, what I am saying is that everything is created from a seed however the art form is not created naturally. Something made into art is a conscious production. We have only one reality and that is death. We are the sole creatures that live with the knowledge that we are going to die. Art provides the possibility of resistance to that universal and metaphysical extinction. I want this exhibit to open up these questions."
I AM LOOKING FOR ANSWERS TO THE QUESTIONS
"For me being a curator means the following. If there is a problem in my head, then I want to discuss this problem in order to solve it. I use the arts as a tool in order to express that problem. An art structure is a tool for me to say what I want to say and provides the grounds for me to pile on my thoughts."