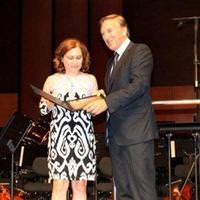 The 40th Istanbul Music Festival will be hosting over 750 performers to ensure classical music-lovers have a bustling month of June filled with music.

The 40th Istanbul Music Festival, organized by the Istanbul Cultural and Arts Foundation (İKSV) kicked off with an opening ceremony held at the

Haliç Congress Center. Speaking at the opening, İKSV Chairman of the Executive Board Bülent Eczacıbaşı stated, "Today, we are no longer simply organizing quality concerts, but we are also signing on to joint productions in the international arena. Our festival provides opportunities for our young artists to further develop themselves, as well as supports the arts by providing orders for pieces to be composed by Turkish and international composers."
Later in the evening, the İKSV Orchestra joined by the Borusan Istanbul Philharmonic and the Ministry of Culture and Tourism Polyphonic Chorus performed Beethoven's Ninth Symphony for the opening concert.

This year the Istanbul Music Festival will be hosting over 750 international and Turkish performers to give classical music-lovers an invigorating month of music in June.

The festival, whose theme this year is 'Hope and Heroes' will run from May 31st until June 29th. The festival will be the host to three world premiers, two international and one Turkish, and will have 25 different performances.

Concerts will be held in eight different venues; the Hagia Irene, which has been hosting the festival for 40 years now, as well as the Haliç Congress Center, the Lütfi Kırdar International Congress and Exhibition Palace, the Dutch Embassy garden, the Süreyya Opera, the Cemal Reşit Rey Concert Hall, the Istanbul University Rectorate Building and the Istanbul Archeology Museum. Tickets can be obtained from Biletix and the İKSV ticket booth in Şişhane.