Fazil Say to move to Tokyo 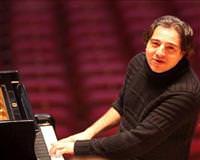 The target of reactions from the Turkish community due to a series of messages sent out on the social media outlet Twitter, Fazil Say now says that it is time for him to leave Turkey.

After experiencing a polemic with a significant of social media users, due to his aggressive opposition to certain cultural values of the Turkish community, pianist Fazıl Say spoke with Newsweek…

Say, who is facing trial and a potential prison sentence for insulting Islam on Twitter, expresses that it was not his intention to insult anyone.

In the article, Say says, "He no longer tweets and recently disabled his account. "First I have to clear these charges against me. I've been libeled," he says. "I did not insult Islam. I just retweeted a verse that I thought was funny. 165 others retweeted that verse the same night but I am the only one being tried."

In regards to his decision to leave Turkey, Say stated "I've lived abroad for 17 years, and perhaps it's time to move on," he responds. "Moving to Tokyo is a possibility, I think living in the Far East will be good for me." In regards to his music and the potentiality of prison, the pianist said,

"Everybody knows that separating musicians from an instrument for more than three-four months will ruin their career," he says about the possibility of imprisonment. "But I don't want to think about it now."