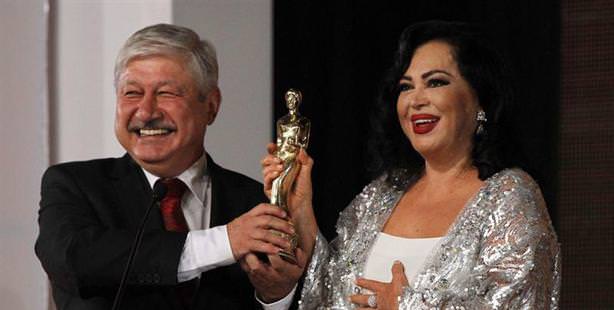 Turkey’s biggest film festival, the Golden Orange (Altın Portakal) kicked off on Saturday for its 49th year with a series of celebrations, including an opening ceremony in which the ‘sultan of Turkish cinema,’ Türkan Şoray, was honored with a social responsibility award.

The 49th Golden Orange Film festival, organized by the Antalya Metropolitan Municipality and the Antalya Cultural and Arts Foundation (AKSAV) will run from October 6th until October 12th. Known as the 'sultan of Turkish cinema,' Türkan Şoray was the recipient of a "Social Responsibility in Art " award which was handed to her by Antalya Mayor Mustafa Akaydın.

In her acceptance speech, Şoray stated, "Many years ago I received the best female actress award at the first Antalya Film Festival. I was very surprised. This is why I have special feelings about being here tonight. I also want to say that the Golden Orange Film Festival has supported and contributed to the Turkish cinema sector for years. I thank all the mayors of the city for this support. Turkish films are cinema is being talked about all over the world in recent years and are winning many awards. I am extremely proud of this and I congratulate all my colleagues."

In addition to Türkan 'Sultan', Hungarian director Istvan Szabo , director Duygu Sağıroğlu, producer Necip Sarıcı and actors Güler Ökten, Salih Güney and Meral Zeren are also recipients of lifetime achievement awards. This year's theme for the festival is "Humor, Opposition and Democracy," and will focus on Turkish and world cinema from the 1990', featuring a selection of films that stood out for their connection to these three concepts.

This year's festival will be bringing a carnival-like air to Antalya. The festival will have ten films competing each in the national international full-length film categories. There will also be 21 short films and 16 documents, competing. The festival program includes open-air showings and galas as well as a number of panels, seminars and workshops.