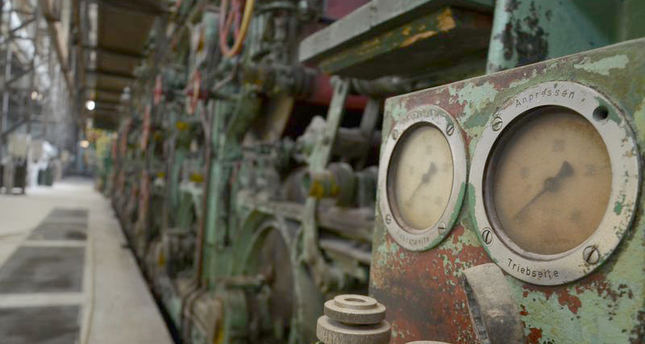 The SEKA Paper Factory in Kocaeli, one of the first industrial enterprises in the history of the Turkish Republic, will reopen as Turkey's first and Europe's biggest paper factory museum once its restoration is completed.

According to information obtained by Anadolu Agency (AA), the foundation of the factory was laid by then Prime Minister İsmet İnönü in 1934. It was then opened two years later by the minister of economy at the time, Celal Bayar, and a ceremony was held with guests who filled two trains to come to Kocaeli. With an annual production capacity of 12,000 tons, the factory was among the most modern factories of its time and the factory delighted Turkish media when it produced the very first domestic paper on April 18, 1936. In fact, to commemorate the occasion, renowned Turkish writer Peyami Safa wrote an essay titled "Kağıt" (Paper) on the subject, which was published in the Cumhuriyet Gazetesi daily on April 21, 1936. He said, "April 18 is worth celebrating as a festival for the sake of our profession. We can live without bread but not without paper." With the domestic paper production, Turkey's dependence of import paper ended and newspapers began to be printed on Kocaeli paper.

Although there were arguments whether the factory would profit or not when it was established, the SEKA Paper Factory thrived and offered jobs to many people in the area. Sports facilities and cinema halls inside the factory became a place where locals engaged with each other. However, the investments to the factory stopped when the High Board of Privatization included SEKA in its privatization list in 1997. The factory was assigned to Kocaeli Metropolitan Municipality in 2005 and the paper producing activities were terminated after a long privatization process despite the reaction of workers and locals in the region. In 2005, the municipality launched the biggest industrial transformation of Turkey over the factory's 247-acre area. SekaPark was opened as Turkey's biggest entertainment and leisure park on the factory's area including some of the coastal area in 2006.

Additionally, the SEKA Science Center and the SEKA Paper Museum projects were prepared in order to make use of the abandoned factory buildings. As a part of the restoration project, which has been continuing for nearly one-and-ahalf years, the antique machines were also repaired including the massive paper grinder. The SEKA Paper Museum, whose internal remodeling continues, is planned to open in 2015 as Europe's biggest paper museum, and will allow visitors to witness the technology used in the paper production processes during the early years of the Turkish Republic.

Speaking to an AA reporter, Tahir Büyükakın, Secretary General of Kocaeli Metropolitan Municipality, said that the SEKA Paper Factory is an industrial legacy of the Republic of Turkey. As the factory could not keep up with the latest technology over time, it was included on the privatization list. During his prime ministry, President Recep Tayyip Erdoğan also wanted the factory to be assigned to Kocaeli Metropolitan Municipality and turned into a park. Büyükakın said that, for the first phase of the project, they first completed the construction of SekaPark and connected the locals with sea. For the second phase of the project, the construction of the SEKA Culture Area featuring a science center, memorialized houses and a film set continues. Additionally, there will be video screenings portraying the history of paper and Kocaeli and what it was like when the factory was still operational.

"Once the construction of the museum is completed, it will be the biggest paper museum in both Turkey and Europe. There is no such industrial transformation project in either Turkey or Europe," Büyükakın concluded.