Miro in Istanbul for another three months 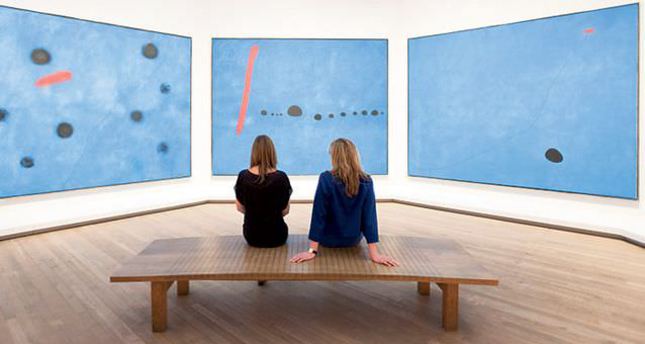 by Daily Sabah Nov 05, 2014 12:00 am
The Miro exhibition has been open since September and has been a popular addition to the Turkish artistic landscape, helping to achieve the goal of "bringing Turkish people together with mankind's common culture" that was laid out at the exhibition's opening.

Following in the footsteps of other titans of modern art, such as Picasso, Dali, Rembrand, Monet and Anish Kapoor, which all attracted a great deal of attention in Istanbul, Miro's "Women, Birds, Stars" exhibition has enabled art lovers from seven to 70 to explore the life's work of one of the 20th century's great artists.

The manager of Sabancı University Sakıp Sabancı Museum, Nazan Ölçer, told to Anadolu Agency (AA) that the museum has broken ground in museology, exhibition and communications over its 12 year of history. Starting with the Picasso exhibition in 2005, so far, the museum has exhibited the works of important figures of art such as Dali, Rembrand, Monet and Anish Kapoor following its mission of "Bringing Turkish people together with mankind's common culture." This season, the SSM has gone one stage further, presenting the most sophisticated and groundbreaking artist of the 20th century, Miro, with a distinguished selection of his painting, lithographs, sculpture and ceramics. The "Women, Birds, Stars" exhibition showcases works by the artist that were produced with different techniques as well as some of his personal belongings for the first time in Turkey at the SSM. Art enthusiasts of every age group have shown great interest in the two months that the exhibition has run for. Due to the intense interest in the Miro exhibition, the museum has decided to apply "long day" practice that is performed on Wednesdays and Fridays. "Thus, people will be able to visit the exhibition until 8 p.m. on Fridays," Ölçer said. Ölçer, who believes that a museum has to have an educational role in order to become successful, said, "I believe this mission will prosper by integrating the environment, city and people." She said, so far, the museum has addressed different age and professional groups with conferences, gallery chat sessions, programs for disabled citizens, workshops for children, student and teacher programs, neighborhood and taxi driver days, corporate nights and many other events apart from exhibitions.

Within the scope of the exhibition, the museum will host training sessions as well. Professor Uşun Tükel, Professor Ali Akay, Professor Zühre İndirkaş, Professor Uğur Tanyeli and Assistant Professor Ahu Antmen will provide SSM's 2014 Fall Semester Adult Training featuring topics such as Turkish painting, contemporary art, art history, architecture and mythology. As usual, the museum will continue with its children's workshops. Children will have the chance to think like Miro and meet their muses, work with his tools and practice his technique during these workshops.

The exhibition of the Catalan painter and sculpture focuses on the artist's mature period. The "Women, Birds, Stars" exhibition was made possible with the sponsorship of Sabancı Holding and organized in collaboration with the Joan Miro Foundation in Barcelona, the Pilar and Joan Miro Foundation, as well as the family collection in Mallorca.

The exhibition focuses on the theme of women, birds and stars, and was heavily inspired by Miro's observations of the Mediterranean and its people. Miro's exhibition offers a rich selection of artworks to help art lovers understand the artist's symbolic language. The viewers who see Miro's works witness the various forms of the energy that the artist drew from Mediterranean culture. The exhibition features 125 pieces of work including oil and acrylic paintings, lithographs, etchings, and assemblages. Moreover, the models and drawings of Miro's sculptures are exhibited. Apart from these important works, the exhibition displays the artist's productions with different techniques such as rugs, cloth, ceramics and poetry books. The entrance fee of Sabancı University Sakıp Sabancı Museum is TL 20 ($9) for adults and TL 15 for groups (at least 10 people). Tickets for students and teachers are TL 10. The entrance is free of charge on Wednesdays. Children under the age of 14, and children under six with a companion, visitors above the age of 60, academic and executive personnel of Sabancı University, owners of ICOM card and press members can visit the museum for free. Muzekart Plus holders can visit the museum with discount tickets during the validity of their cards.