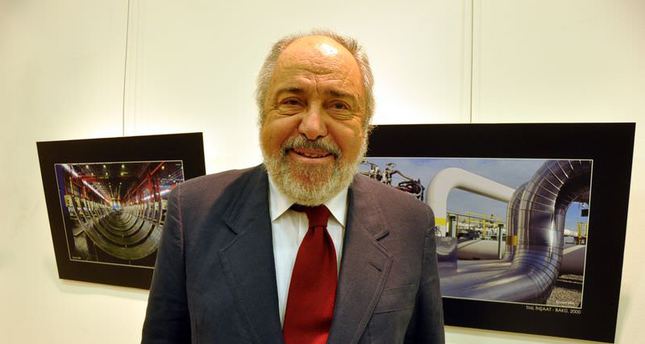 by AA Nov 09, 2014 12:00 am
Ersin Alok, one of the prominent names in industrial photography has created one of the biggest industrial photography archive in Turkey. The artist, who has been documenting the development of Turkish industry, has nearly 10,000 photos in his collection. He recorded Turkish industry's development step by step by taking photos in factories and industrial sites such as construction sites, electronics factories, food processing plants, mines, harbors, dams, furniture shops and defense industries.

His archive also includes photos of mountains, marine life, architecture and archeological sites. The artist has been taking photos since 1953 and began professional photography after 1967 when he came first in a competition held in Paris. Alok told an Anadolu Agency correspondent that the machines featured in his photographs are mostly domestic products. He noted that the second Turkish industrial revolution started in 1966. "I held many exhibitions to showcase how the industrial movement began and continued in Turkey in a new and modern manner," Alok said and that he tries to tell and display the story of Turkish industry along with its influence on society.

The artist got his start in industrial photography by taking photos of people who had made groundbreaking innovations in industry. He has documented how Turkish industrialists made many of their radical breakthroughs in various fields and how they have developed innovative ideas. Alok's photographs have received critical acclaim from some Turkish industrialists as well. He said, "The giant steps that Turkish industry has taken in the past 10 years regarding the sector became the biggest and only success of the new Turkey in the modern world. My photographs mirror how strong and incredible this initiative is." The artist is currently planning another project focusing once again on Turkish industry. "I think that I will complete my new project in a short period of time," he said.