Gaza artist depicts war through sculptures of the dead 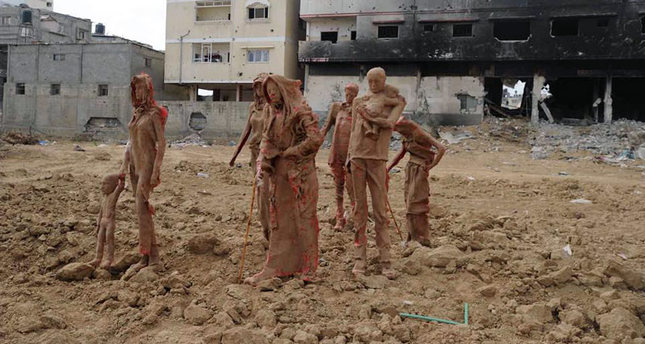 by daily sabah
Nov 12, 2014 12:00 am
For seven weeks in July and August 2014, the Gaza Strip was shelled bythe Israeli military, leaving behind a trail of destruction with hundreds of casualties and many more wounded. After the cease-fire, people worked to slowly piece their lives back together. Palestinian artist Eyad Sabbah has been making statues in the Shejaya district, which was highly affected by the bombardment, in an effort to express his feelings about the war. The sculptor erected the statues out of fiber glass and covered them with clay. In his interview to Al Arabiya News, Sabbah said, "I wanted to portray what was missing, not only of those who lost their lives, but also those who fled their homes. We lived through war, we lived the events we saw in the media, all of this pushes us into thinking about expressing the view we've seen." The sculptor wanted to turn the destroyed buildings into art works. "I tried to add to them what was lost after the war, the people. I tried to build the people, but through my own vision, I tried to divert the subject to human consciousness because at the end of the day, human beings paid the price of the war," Sabbah said. The statues depict men and women, sometimes holding their children or walking alongside them. "Generally, an artist turns anything he gets his hands on into art, into a piece with value, but we do have a serious crisis with our supplies, especially when it comes to sculpting," the sculptor told about their supply problem. Another problem with the sculpture installation was that the Shejaya area is private property. "We couldn't keep them there for too long because the plots on which it was displayed was private property" albeit destroyed, "these places belonged to people," Sabbah noted. Born in Gaza in 1973. Sabbah has a Bachelor's degree in Fine Arts from the University of Tarablus, Libya and a Master's degree in Sculpture from the University of Hilwan in Cairo. Sabbah teaches in the Fine Arts Department at Al-Aqsa University. Sabbah has been practicing art for more than 15 years.