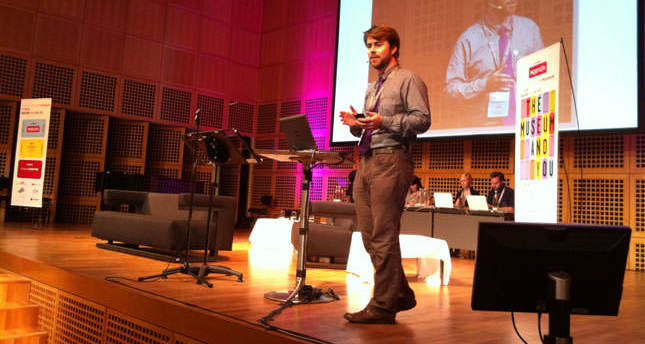 by Ihlas News Agency
Nov 12, 2014 12:00 am
It was announced that the 15th edition of Communicating the Museum conference will be hosted by Turkey's Culture and Tourism Ministry in Istanbul in the upcoming year. The announcement was made at the closing ceremony of the 14th Communicating the Museum conference, which is widely recognized as the world leading arts communication conference. During the ceremony, International Design & Communication Awards (IDCA) were handed out and Mardin Museum, which is affiliated with the Culture and Tourism Ministry, won the Best Program award for its Arkeopark project, overtaking its opponents from the U.S. and Australia. The program offers workshops for young people aged between 5 and 18. Arkeopark also features numerous programs for every age group and archeological excavations accompanied by archeologists as well. For this year's IDCA awards 96 projects from 76 museums in 17 countries competed in Sydney.

Organized by Paris-based communication agency Agenda, Communicating the Museum is held annually in cities renowned for their culture and art. The 15th edition of the organization, which will be sponsored by the Culture and Tourism Ministry, is expected to contribute positively to Turkey's tourism. The event is held exclusively for museum professionals and will take place from Sep. 9-12, 2015 and the theme of the conference will be "Contemporary." Thanks to the hard work by Culture and Tourism Minister Ömer Çelik, and an intense traffic of phone calls, the organization committee agreed to hold the conference in Istanbul.

The most important intention of the conference is to put the museums of the cities where the event is held in the international spotlight and increase the number of visitors by making use of cultural and artistic examples from around the world. In this respect holding this conference in Istanbul - home to some of the most significant civilizations in history and has many World Heritage Sites - became more meaningful. Moreover, it is expected that this event will provide added value to alternative tourism that is recently focused on by the ministry.

Through Communicating the Museum conferences, Istanbul's museums will find place in the international media and the city's cultural aspect will be introduced to the world once again. Organized in major cities of fashion, art, culture and tourism such as Paris, New York, Madrid and Vienna, the conference reveals both the modern and traditional aspects of the cities. Officials believe that the organization will contribute to Istanbul's brand value. The conference stands out for its innovative and contributive format and will host debates in which experts can share their experiences and remarks, workshops and discussion groups. The conference will bring an international platform to Istanbul - 500 representatives composed of experts on chosen topics and nearly 1,000 participants from around the world will attend the event.