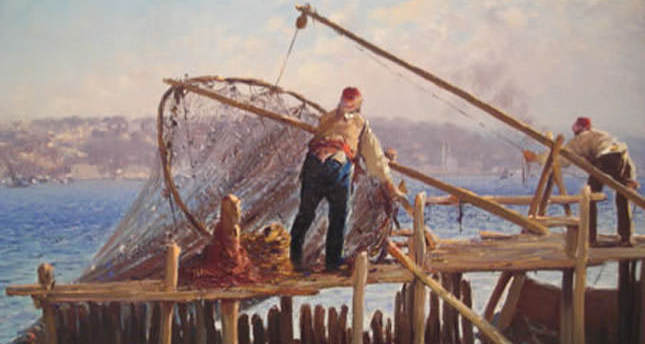 by Daily Sabah Nov 13, 2014 12:00 am
Beginning in its early periods, the Ottoman Empire established deep relations with the empires and other political actors of Europe. Certain Western powers wanted to be acquainted with the Ottomans and understand this source of great military power and political authority, as it was a political necessity even though sometimes they were urged by both curiosity and fear. However, the encounters between these different cultures bore the longest-lasting fruits within the arts. Wars, searches for alliances, the development of commerce and conflicts of power and status were the most significant reasons behind the intense diplomacy traffic of the 15th, 16th and 17th centuries. The sprawling Ottoman Empire welcomed more ambassadors than they sent to other countries especially until the 19th century and hosted ambassadors according to Ottoman customs and traditions.

Western ambassadors, in turn, were tasked with documenting the cities, social make-up, traditions and customs along with administrative and military organizations of the Ottomans. Apart from the reports that they prepared, they also made use of the gifts and paintings given to them on their way back to their homelands. Paintings, which are often presumed to be true-to-life visual documents, became the most evident expressions of prestige and social status that also held a special place and meaning as they have the potential to address the masses. Paintings commissioned by ambassadors for the artists in their entourages on their way to the east or the interactions with their local counterparts that they ran into during their visits turned into books with engravings or collections decorating the walls of European castles. These works served as a source of inspiration for other artists and generated a large visual repertoire related to the Ottoman world. Also, Ottoman ambassadors who went to other countries were featured in the monumental portraits painted by the prominent European artists immortalizing these important visits.

A selection from the Suna and İnan Kıraç Foundation Orientalist Painting Collection enables us to travel along the roundabout paths of diplomatic history and introduces us to conflicting personalities under the guidance of art. Ambassadors and painters continue to talk to us through their silent yet equally rich and colorful language, present their reports, letters, worldviews, travels and experiences as well as the ceremonies they participated in. It is impossible to not be attracted by the glory and the splendor of a lost age while listening to their extraordinary tales. Osman Hamdi Bey: His life and works through the collections of the Suna and İnan Kıraç Foundation Osman Hamdi Bey was one of the Ottoman intellectuals from the Tanzimat Period. He made many contributions to the various fields of art and culture, such as painting, archaeology, museology and art education. The heritage that Osman Hamdi Bey left continues to live on in the works of artists and scientists, foundations and museums. He still manages to stand out among the masses of artists, making his voice heard through the ages and becoming the subject of heated debates. His works from the Suna and İnan Kıraç Foundation, which are on display at the Sevgi and Erdoğan Gönül Gallery in the Pera Museum, offer a variety of examples of his relationship with painting while saluting his sophisticated personality.