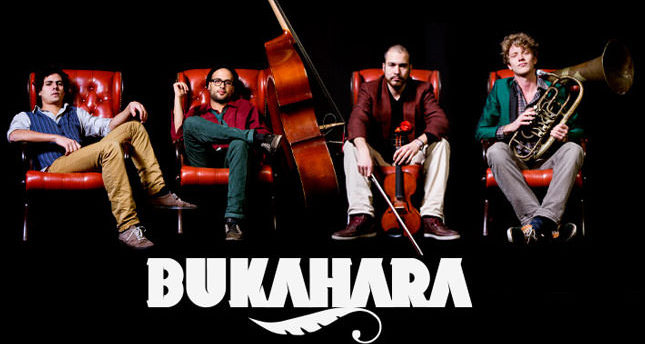 by daily sabah
Nov 13, 2014 12:00 am
This year marks the 25th anniversary of Berlin becoming sister cities with Istanbul. Apart from numerous events that have been taking place in both metropolises, SubOrient Productions invites everybody to the Istanbul edition of the festival that was held in Berlin last September. The festival offers live concerts and DJ sets of underground performers of Berlin and Istanbul as well as film screenings, dance and visual-audial performances and chat sessions on recent socio-political developments, which brings artists from both cities together. The collective will hold the second edition of the festival in Istanbul until Nov. 16 and will host artists and participants from Berlin and Istanbul at the cinema hall of SALT Galata, Arsen Lüpen, KargArt and the well-known night club Wake Up Call to celebrate the diversity and creativity of both cities. SubOrient Productions was founded by Ipek Ipekçioglu, Jamila al-Yousef and Begüm Karahan, and the Berlin-based collective draws attention to the trans-cultural art production and diversity in different art disciplines as well as creating a debate platform for its employees to talk about socio-cultural issues.

The story of Cümbüş Cemaat started with a jam session in 2005. Ever since, these seven multi-instrumentalists have given more than 500 concerts at various clubs and festivals. They create traditional music influenced by the roots of different genres.

The band combines Gypsy-swing, reggae, funk and Balkan melodies, yet it is entirely different from all of them. This captivating mix distinguishes the band from others and placed them in a different place in music lovers' hearts altogether. Singing in English, German, Arabic and Balkan languages, this multi-instrumental band balances lightness and devotion. Perhaps the definition of the Bukhara world lies in their trans-cultural background: A Jewish-Swedish violinist, a Tunisian guitar virtuoso with a blues voice and a Palestinian who dances with his contrabass.

Berlin-based Cats & Breakkies defines their music as "Organic Electro," which blends Berlin club stage's pure electronic dance music. They organize their music similar to a DJ set; however, their music is performed live and is not pre-prepared. Their performance includes a team of six musicians. The dynamic drum creates a base for colorful sounds and pumping bass. Moreover, the pianist's orbicular sounds meet guitar rhythms and the soul sounds of Jazz baritone.

Consisting of Olaf Hilgenfeld and Iftah Gabbai, Skinnerbox was founded in Berlin in 2003. During their first years as a group, Hilgenfeld and Gabbai produced abstract electro-acoustic sounds that included their own synths with the trends of Neo-Hippy Berlin. They released their album on the Berlin-based electronic music label, BPitch Control. What makes Skinnerbox different from others is their one-time live improvisation is composed of deep house and jazz and away from their individual identities and larger trends.

Berlin-based artist Karajan, who was born in Istanbul, produces her visuals from social and cultural phenomenon and by using the colors of urban life. She has performed at different events in various countries including Morocco, France, Armenia, Hungary and Brazil.