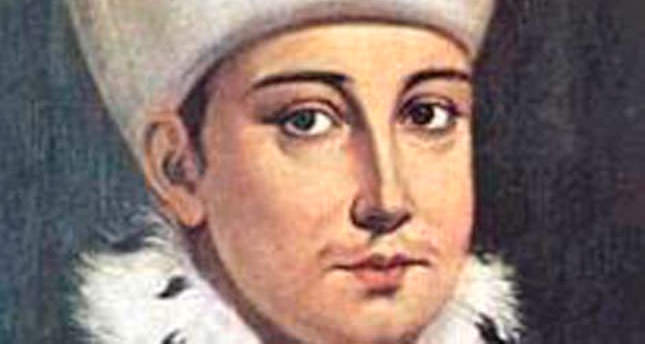 by Hakan Arslanbenzer
Nov 15, 2014 12:00 am
There is history, and there is legend. And some events are made into legends though they are parts of history. Since the cast of figures and events in Turkish history is utterly vast and our imagination boundless, we have an abundance of modern legends even though these are times that are (supposed to be) disciplined by all sorts of information, documents and records.

On the one hand, there is a sea of archives dating from the Ottomans, who were rigorous in recording every single object belonging to the state and an objective historiography built by virtue of these archives.

On the other, colossal legends, black or white...

When approached from this particular perspective, Ottoman history appears to be heaven on earth for novelists and cinematographers, as it is for historians and sociologists.

There are certain times when the above-mentioned heaven resembled hell, such as the long, consuming, everlasting 17th century.

The magnificent centuries of giants such as Mehmed II, Selim I and Süleyman I had long gone.

Conquests were nearly at a halt because of incapable sultans and corrupt pashas.

An economic crisis had broken because of famine, inflation and fiscal corruption.

As if all this was not enough, various brigands had emerged throughout Anatolia: The property, honor and life of the people were under threat.

We assume a single interregnum in our history despite lineage disputes from when Timur the Lame defeated Bayezid I ("the Thunderbolt") in the Battle of Ankara at the beginning of the 15th century until Mehmet I ascended the throne. We do, however, have at least one more "interregnum:" The Celali Interregnum as prominent historian Mustafa Akdağ calls it.

Just when the Celali revolts that spread throughout 1590-1610 were suppressed via violence-laden interventions and the measures of Kuyucu Murat Pasha, a crisis broke out.

The child sultan: Child or sultan?

When Mehmed III and his son Ahmed I, who was crowned at the age of 14, died and their successor Mustafa I went into frenzy, Ahmed I's 14-year-old son Osman II had to be crowned in 1618.

History records Osman II as well meaning, inexperienced, brave and ruthless; someone capable of making big decisions but who was easily influenced; a cruel, oppressed dreamer who had great ideals. Some of these qualities are attributed to many sultans, but it is Osman II to whom they are all ascribed. It is as if history has not made up its mind about Osman II; perhaps, it never will.

Osman II, who was crowned almost as a child, apparently wanted to become a sultan like his ancestors who were the heroes of his childhood stories of valor. It is said that during the first days of his reign, he was controlled by his mother, instructor and harem master. In time, he was to break free and personally attend the Polish campaign in an attempt to prove himself. When the army failed to reach the goal set by the sultan, tension rose between the two parties.

This was not the first of the tensions to rise between the Janissaries and the sultan. The Janissaries, the superpowers of their time, had also attempted to rival Selim II. When Süleyman I died on campaign and his son Selim II was crowned in Istanbul, the soldiers started to grow restless; they wanted to see the sultan in the field commanding them. Not quite prone to war making, Selim II through instillations went to the battlefield to lead the army. But this time a matter of payment arose. Having already handed out salaries during his ascension ceremony in Istanbul, the sultan was not willing to tip the Janissaries additionally on the battlefield. It has been speculated that the Janissaries yelled, "We know what to do with you," behind the sultan's back.

The words yelled at Selim II were nothing more than a childish reproach when compared to those yelled when Osman II was being dethroned. Returning tired and halfhearted from the Polish campaign, the Janissaries were uncomfortable with the sultan; while the sultan was uneasy with the Janissaries, he was responsible for the failure of the conquest. It is absolutely clear that chaos was about to break loose. Osman II was not a ruler to ponder and consider the political conditions of the specific time and place and act accordingly. As befits his name "Genç Osman," meaning "Osman the Young," he was too young and convinced that he could accomplish anything he imagined and believed. When the dream of the conquest of Poland failed with the Janissaries, he recruited youngsters from Anatolian and Syrian provinces and nurtured the dream of building a new army. This final dream was to end his reign and his life.

The idea of dissolving the Janissary army and replacing it with a fresh, willing and ostentatious army composed of pure Anatolian youngsters probably appeared attractive to others than Osman II as well, but the fact that the Janissaries were not merely soldiers but also politicians and the main propaganda institution that shaped public opinion transformed this new situation into a crisis of power.

Even though Osman II did not want to yield to the Janissaries, he announced that he had given up his idea of recruiting Anatolian-Syrian soldiers. But the already inflamed Janissaries, together with the public they themselves had agitated, obstructed the sultan. The Janissaries first tore to pieces the grand vizier and the harem master sent to them by the sultan and then raided the palace and dethroned Osman II.

What followed was shameful.

Osman the Young was taken from where he had hidden and put on a horse.

The deposed sultan was taken from Ağa Gate to the Orta (central) Mosque in his undergarments.

The Janissaries badmouthed Osman the Young on the way, while Altıncıoğlu's vulgar actions are too shameful to even mention.

ONE SLANDER, ONE TRUTH

The claim that the Janissaries murdered Osman II is a lie, a slander. Even though they did indeed begrudge the young sultan because his policies were not in their favor, and even though in the end they managed to dethrone him, the Janissaries were not inclined to shed a sultan's blood; this was inconceivable. The murderers of Osman II were Davud Pasha and his executioners.

The Janissaries displayed weakness, taking inadequate measures to prevent the imprisoned sultan's execution by the executioners of the grand vizier. Many times, Davud Pasha had attempted to have the young captive strangled, but Osman the Young, having a wrestler's build, managed to strangle the executioners with his bare hands. Thereupon, the scheming Davud handed out money. He made use of the ensuing turbulence to have the sultan abducted and taken from the Orta Mosque to Yedikule Fortress where he was strangled.

The people of Istanbul, who had cooperated with the Janissaries to dethrone Osman II, started asking for someone to be held accountable once the sultan was strangled. So the Janissaries had Davud Pasha and his executioners torn to pieces.

The martyrdom of Osman II is simply the most important link in a chain of murders. Being a warrior state, the Ottomans held themselves responsible for failures encountered in campaigns, and many lives were taken and spared between the palace, the army and the pasha courts.

Sadly enough, this bloody scene would continue for the rest of the 17th century.