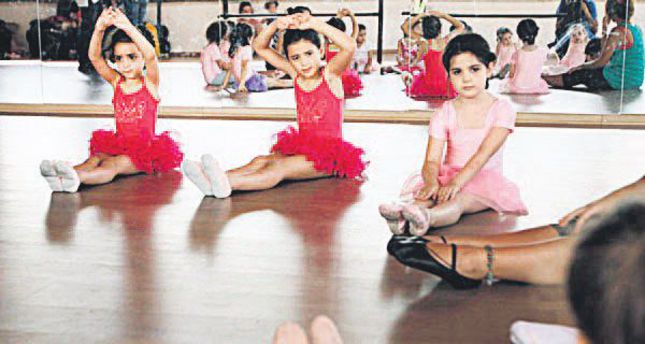 In the Israeli-occupied West Bank city of Ramallah, a Palestinian ballet teaches her young students how to think positive for the future through dance at her small school

Ramallah dancer Shireen Ziyadeh wants to use pirouettes and plies to change the place where she grew up by training aspiring ballerinas to show that "something beautiful comes from Palestine."

In tights and a white tunic, her hair pulled back in a flawless bun, the 24-year-old Palestinian repeats instructions to a group of tiny dancers in pink tutus and slippers at her ballet school in the West Bank city of Ramallah. The idea of teaching ballet to little girls came to the young management studies graduate four years ago. "I wanted to bring something new and offer them other perspectives on the future," she told AFP. But as is often the case in the Israeli-occupied West Bank, the dance classes also have a political dimension. "Ballet, which is a major art form, is a good way to revolutionize traditional Palestinian culture," she said. "I'm not only teaching them to dance, but also how to integrate with others."

Ziyadeh's is not the first ballet school in Ramallah as she herself learned to dance here in her childhood, but she is one of just a handful of teachers across the Palestinian territories. "Teaching ballet and its philosophy [here] is also a way of showing the world that something beautiful comes from Palestine," she said. "Ballet has its own universe, different from all other forms of dance. You have to express yourself with all the muscles in your body to show the full purity of this dance form," she said, as her girls danced to a melody from the soundtrack of the 2001 French film "Amelie."

Opened in May 2011, the Ramallah Ballet Center says on its website that it offers "the ability to dance, act and think in more positive ways". Although ballet is a niche activity in Palestinian culture, traditional folk dance is everywhere. No marriage or other celebration takes place without participants dancing the "dabkeh" - the Palestinian national dance. Today, Ziyadeh's school has 60 pupils - all of them girls between the ages of four and 20. But when it first opened there were challenges. Even in Ramallah, the political capital of the West Bank and considered the territory's most cosmopolitan city, there was opposition from more conservative Palestinians. Some were suspicious of a school teaching a dance form that involves children and young girls wearing tight clothing and dancing on their own, rather than in a group as with the dabkeh. And there were some who did not like the idea of a young woman starting her own business. "All new ideas generate rejection, but I always knew I would make it," she said. To reassure her neighbors, Ziyadeh left the doors of the school open so that anyone could come in and see what was going on. And to keep her project a fully Palestinian venture, she also refused offers of foreign funding.

Yasmin al-Sharif had a childhood dream of learning to dance that was never fulfilled. Today, she pays $70 a month so that her daughter can learn. "I have loved ballet since I was small, but in my day there was no center like this," she said. As the girls practiced in front of a mirror stretching the length of the room, Faten Farhat and her 7-year-old daughter Salma arrived. "Salma already dances dabkeh, but I love ballet so I encouraged her to join," she said. "Before, we had no opportunity to engage in an activity outside of school. Today things have changed and it's up to us to encourage even more change to move toward an even brighter future."
Last Update: Nov 24, 2014 9:20 am
RELATED TOPICS