A breath of fresh air for Turkish cinema 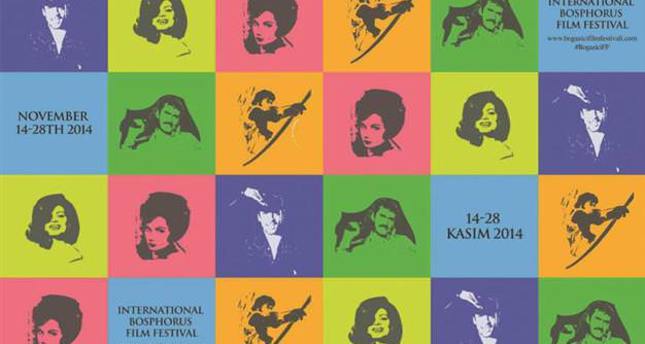 by İklim Arsiya
Nov 25, 2014 12:00 am
Organized by the International Bosporus Cinema Association and the Istanbul Media Academy, the second annual International Boğaziçi Film Festival kicked off on Nov. 14 and will continue until Nov. 28. The festival is being held in order to contribute to the development of films that are deemed to have ethical and technical integrity. Moreover, the festival aims to financially support young producers and directors as well as offer them encouragement so they can produce new films, reinforce Turkey's cinematic identity and promote Turkish cinema both in Turkey and around the world. Kamil Koç, general art director of the festival, spoke to Daily Sabah about the expectations and purposes related to the festival.

The theme of the second edition of the International Bosporus Film Festival is the 100th anniversary of Turkish cinema. What should art lovers expect from this year's festival in terms of its theme?

A good selection of Turkish cinema classics awaits movie buffs. We have a program titled "From Tradition to the Future" and it will offer classical films although many have already watched them on the Internet or television. However, the program will present an opportunity to watch these films at Atlas Cinema Hall in the heart of Istanbul with a nostalgic atmosphere. Moreover, the "Short to Feature-Length" program will display worldwide renowned directors' cinematic journey from short to feature-length films. Apart from these programs every year, we choose a director and screen all of his or her films to give an idea about the director's filmography to the audience. This year, Zaim Deviş's films will be introduced to the participants of the festival. The audiences can also opine about the 100 years of Turkish cinema through these kinds of programs.

What is the purpose of inviting academics from New York University and what role will they play at the festival?

Some of them are our jury members and they are also organizing workshops during the festival. The aim of the International Bosporus Film Festival is to trigger the potential in people who can shape the future of world cinema. As we all know, the U.S. is composed of the Pentagon and Hollywood, the heart of the cinema. We have called for these academics to inform young Turks about the latest developments in the center of the world cinema.

Nov. 14, 1914, is regarded as the beginning of Turkish cinema. What is the meaning of this date and why is it important?

The Russo-Turkish War of 1877-1878 reached Ayastefanos (present-day Yeşilköy of Istanbul) and the Russians erected a monument in the region. During the Treaty of San Stefano, the Turks demolished the monument and filmed this incident. This recording made history as the first ever Turkish film. Although there is speculation about it, we accept Nov. 14, 1914, as the beginning of the Turkish cinema.

I believe that short film is the core of cinema around the world. The cinema industry can stand still as long as it has a dynamic structure. Feature-length or independent films cannot be fully independent because cinema is not pure art; it is also the product of industry. Hence, short film is a genre where both the producer and director can express themselves freely as they do not feel any attachment to financial sponsors. With its production opportunities and processes as well as narration structure, short film is the most independent genre in the film industry. At the same time, it serves as the research and development center of the cinema since it is open for new opportunities and approaches to cinema. Unfortunately, short films cannot meet a wide range of audiences and financially do not bear benefits except from film festivals. We know that we can make Istanbul the center of cinema by bringing together the short films around the world as well as Turkish short films and Turkish short film directors. If we manage to do this, Turkey will be the country that shapes the future of the world cinema. Shaping the future of cinema means enlarging the borders of the narrative structures and the cinematic language as well as setting a course for cinematography's future.

What should art lovers expect from the second edition of the festival different to the first?

We only included national competition films in the festival and did not hold an international film competition although we screened international films in the short film section in the previous year. However, 3,682 films from 102 countries applied to this year's festival. This is actually a remarkable number. We will choose the best 10 short films of the world thanks to the jury structure that we established. The honored guest of the festival is Poland, so we included some of the most influential Polish films to the festival program. This year marks the 600th anniversary of the diplomatic and cultural relationships between Turkey/Ottoman Empire and Poland and within the scope of this, we added Polish subtitles to the films in order to make a goodwill gesture to Poles living in Turkey. Aside from these, the festival will screen a selection of international short films as well as the most successful short animation films of the world. I believe that the demand for our workshops will be even greater than the previous year. Movie buffs can check out the contents of these workshops by taking a look at the program.

You said the festival received nearly 4,000 applications from 102 countries. Within this scope, how do you see the future of cinema in Turkey?

There is no concept such as that of "Turkish cinema" in world cinema literature - in other words, in the schools or the books that teach cinema. Turkish cinema is not a term that is canonized since it is not clear if there is a Turkish cinema or not, even though Turkish cinema is celebrating its 100th anniversary. So, it is hard to talk about the future of Turkish cinema before studying the reasons behind it. The International Bosporus Film Festival's aim is to create a platform to debate this issue, keep it on the agenda and help Turkey find itself a place in world cinema. Seeing the interest of Turkish people in Turkish cinema and the Turkish films that compete in the international film festivals makes us hopeful about its future. Film producers and the cinema industry as well as the Turkish cinematic techniques have reached a successful place in world cinema. The important thing is to shape this technique with an aesthetic attitude and form a general idea around the concept of Turkish cinema. This is something that can only manifest through a cultural movement and the atmosphere in Turkey is very suitable to host these debates right now.

The best film will be awarded the Ahmet Uluçay Grand Prize. Why is this prize important to you?

Ahmet Uluçay is a filmmaker who corresponds to the ideal of Turkish cinema that we have in our minds. He is an exemplary cinema figure with his films and life. He passed away but left his works to young Turkish people. We want to highlight Uluçay, himself, and his life and works by giving his name to the grand prize. The name Ahmet Uluçay is a strong image and metaphor that helps to make us understood.