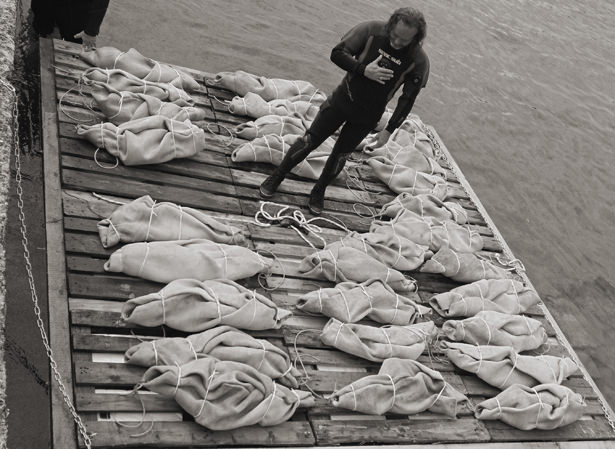 Nikolaj Bendix Skyum Larsen’s ‘End of Dreams,’ an ode to the countless lives that have been lost by those attempting to traverse the Mediterranean Sea in order to reach Europe, is on display at SALT Galata until March 29

Not every exhibition is strong enough to chill you to the bone. But that is exactly what Nikolaj Bendix Skyum Larsen manages to do with his new installation that is on display at SALT Galata until March 29.

Exhibited on the ground floor of a building that once housed the first national bank in the Ottoman Empire, "End of Dreams" consists of a multi-channel video installation projected onto the building's large walls. On the completely darkened hall's floor are placed five groups of concrete-canvas sculptures. Reminiscent of body bags, those sculptures are the real subject of the exhibition. The video installation shows them under water, acquiring a patina of sea organisms. Listening to sounds of the sea and looking at those illuminated figures you realize how this is the "End of Dreams" for countless modern day immigrants travelling to Europe.

It all began in 2003 when Nikolaj Bendix Skyum Larsen was invited to exhibit at the Sharjah Biennial in the UAE. It was his first visit to the Arab world and he wanted to have an extended stay there. "To afford staying longer I offered my services as a technician for the Biennale," he told me. "So that year I worked there as well as exhibiting in the Biennale. It was my responsibility to train a team of workers to be able to handle and install art. The workers were primarily from India and Pakistan. I developed a relationship with them and we talked a lot about what brought them to the Emirates." In 2005, Larsen returned to do a residency at the Sharjah Biennial. He filmed the workers he knew there on Super-8 film. In Sharjah, there were thousands of young men from Asia who went there to work and send money back to their families. "I started imagining towns in India where only women, children and the elderly lived," he said. "In 2009 I made the video installation 'Rendezvous.' This work consists of video portraits of Indian workers exhibited in front of video portraits of their families in India."

This was Larsen's first work that focused on migration. "So it was a personal interest based on my friendship with the workers in Sharjah. This led to a commission for Folkestone Triennial in UK in 2011. For this exhibition I spent 18 months making a film about migrants in the French seaport town Calais, where thousands of migrants are trying to get to England. I heard the migrants' stories, I spent a lot of time with them, and became very close friends with some of them." This work turned into a film called "Promised Land," which will be screened at SALT Beyoglu walk-in cinema this Thursday, on Feb. 26. After finishing the film Latsen had a desire to backtrack their routes.

"I am still in the process of doing this. I have made work in Greece for the Thessaloniki Biennale where I deal with migrants drowning between Turkey and Greece." Larsen shot the film "End of Season" about this issue in Turkey (it was screened at SALT Beyoglu's walk-in cinema on Feb. 20). Most recently he filmed "End of Dreams" in Italy. "These works are all part of a long process which I will continue to research," he said. In 2011, Larsen made a series of sculptures of a material called concrete canvas for the Thessaloniki Biennale "Ode to the Perished." The 48 sculptures that he made for "End of Dreams" were a development of this work. "Every day I saw photos of drowned migrants and I wanted to react to this with my work. I wanted to make a monument honoring them so that they are not just forgotten or ignored," he said.

"I saw a press photo where many dead bodies wrapped in cotton sheets were lying in long rows next to each other, and I wanted to recreate that photo. So I made this series of sculptures reminiscent of bodies wrapped in fabric. My idea was to immerse them in the sea for a long time so that they could develop a patina of water organisms. So we installed the sculptures under a large raft in the sea. After about three weeks an unusually violent storm came and destroyed the raft. The sculptures were scattered over a large area of the seabed. Many disappeared. I had lost everything." In 2012, Larsen did an artist residency with PiST in Istanbul. There his friend Didem Özbek showed Larsen a video clip that was filmed underwater of a boat that had sunk off the coast of Izmir. "Many migrants had died in this accident. This video stayed in my mind, it was like a seed waiting to blossom," he said.

"When the accident happened to 'End of Dreams' I was back in Paris where I live, and I asked my assistant in Italy, Giuseppe Politi, who was a keen snorkeler and underwater photographer if he could film some footage so that I could see how badly affected the raft and the sculptures were. So the day after the accident. I was terrified to see that I had lost everything. But after consulting friends and colleagues I started to think that it was interesting that my work about migrants in peril had become affected by similar deadly natural forces. The footage Giuseppe produced was sad, beautiful, poetic and shocking at the same time, so I decided to pursue the direction of the video. I directed Giuseppe over the internet and via text messages, and over five months he filmed and emailed the footage to me so I could edit it. While he filmed he also searched the seabed for sculptures and he managed to find 11 that were 'rescued' by a team of divers."

A few weeks ago, on the day of the opening of "End of Dreams" at SALT, a women came up to Larsen after seeing the work. She was crying. "She thanked me for the work, but she also said that it made her very sad. She has Syrian friends, and some of her friends had died while trying to reach Europe. I was very affected by her strong reaction," Larsen said. "'End of Dreams' is a brutal work about innocent people who lose their lives while trying to get to a safe place. But it is also a work that is made as a monument to the people who have died. A place where spectators can reflect and feel."

'End of Dreams' is produced by qwatz, a.i.r. ROME.