A new game area to escape from daily hustle 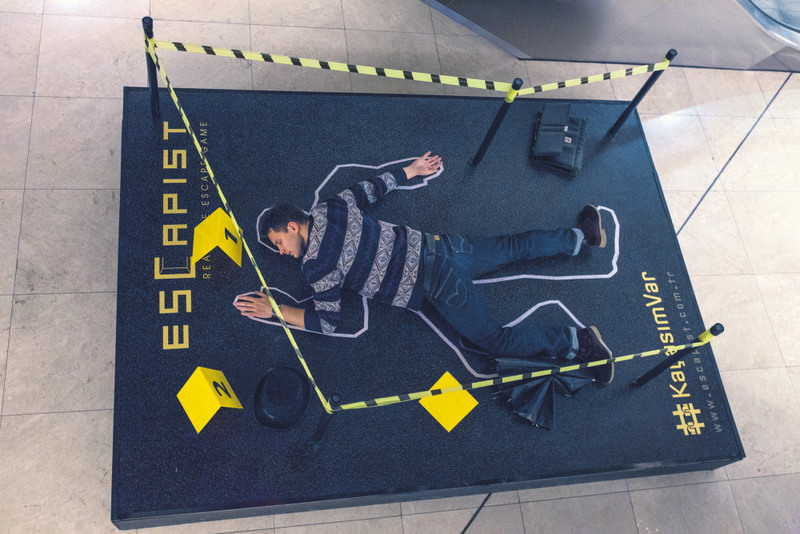 "Escapist," which brings Turkey's biggest escape game concept together with adventure lovers, opened its doors at the Trump Shopping Mall in Şişli in February

"Escapist" invites gamers to join the adventure and the excitement of three games with connected stories for the first time in Turkey, with its six different rooms and game contents, at Trump Shopping Mall. Characterized as an "escape game center," it offers games and stories that everybody over the age of 14 can easily play, and makes the participants feel like they are in a motion picture. Participants try to solve the passwords and codes they are provided within the given timeframe in order to get out of the room. To finish the games, which can be played with groups composed of two to 10 players, teams must work together and follow the signs correctly. Anybody who evaluates the clues correctly and is perceptive enough can escape the room. Escapes games can be played in both Turkish and English, and teaches certain skills such as role playing, problem solving, observation, communication and teamwork while also being entertaining. "Escapists" offer six different games titled "The Secret Experiment," "The Company," "Chasing the Past," "The Holy Treasure," "Agatha's Key" and "The Forsaken Metruk." The escape game center is open every day from 10:00 a.m. to midnight.

We talked with entrepreneurs Soner Emanet and Barış Koca, the two figures who introduced "Escapist" in Turkey. Emanet and Koca have produced some advertisements and documentaries so far, but their expertise area is design. They both graduated from the Fine Arts Faculty of Marmara University. Soner studied industrial design, while Barış specialized in graphic design. The schoolmates continue their friendship as partners in BBA Productions and Escapist.

Soner Emanet: When online room escape games became popular, the first real escape game emerged in Japan seven years ago and spread to Asian countries and later all around the world. The game is currently in the top-five tourist activities in the world's important cities.

DS: How did you decide to introduce this game in Turkey?

S.E: We have a production company and produced many advertisements, documentaries and directing projects. We tried this game during one of our travels abroad and thought our production experience would enable us to develop a similar game. Until now, our projects addressed the visual world, but "Escapist" offers a world that you can feel. Following our studies, we introduced Turkey's biggest escape game including six other games. Two teams start the game in different rooms and work together to end the game. Players come upon consecutive stories related to each other. Indeed, we designed the game thanks to our collaboration with famous detective author Ahmet Ümit. A first in the world - a real escape game was developed based on a book. Ümit's readers are excited to try the game.

DS: When was "Escapist" introduced in Turkey? What are your future plans?

"Escapist" was introduced in mid-March. I believe it is a successful game based on the feedback of our visitors, most of whom greatly enjoy it. We are thinking of opening other game venues for "Escapist" in different cities.

DS: Does "Escapist" attract enough interest? Which groups are interested in it?

We anticipated high interest and have achieved it. Sometimes, we open additional night sessions during weekends. Those who completed the first four games are waiting for the last two. "Escapist" is a rather new game, but players are continuously asking when new editions will appear. Companies send their staff for educational and motivational purposes. "Escapist" is an enjoyable alternative for developing team communication and problem solving. Big groups can play the game as our venue hosts up to 400 players on a daily basis.
Last Update: Apr 11, 2015 1:57 am
RELATED TOPICS