How humans have become a force on a geological scale 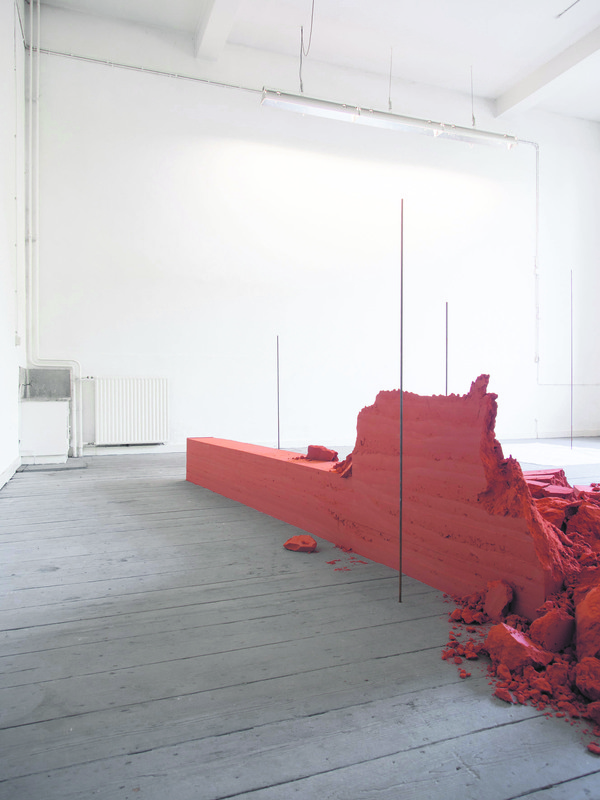 The winner of last year's Akbank Sanat International Curator Competition, Niekolaas Johannes Lekkerkerk, talked with Daily Sabah about his ‘Percussive Hunter' exhibition, which is on display at Aksanat Beyoğlu until May 16

If you visit Beyoğlu this week, numerous arthouse films will compete to attract your attention, so you know it is Istanbul Film Festival time. The city's film buffs have been spending the first week of April inside dimmed movie theaters, making discoveries and tweeting about them. They may have missed one of the most interesting films on offer though. It is shown on the second floor of Aksanat's gallery on İstiklal Avenue. Camille Henrot's 13-minute video "Grosse Fatigue" chronicles the evolution of living matter in a fascinating way. It shows the desktop of a Mac where numerous windows show different facets of creation and death. The video is part of the "Percussive Hunter" exhibition by 27-year-old curator Niekolaas Johannes Lekkerkerk who holds a bachelor's degree in art history and visual culture from the University of Utrecht and a master's degree in curating from the London Metropolitan University delivered in conjunction with the Whitechapel Gallery.

I asked Lekkerkerk about the title of the exhibition and what on earth it means. "It was derived from a type of animal among woodpeckers and the aye ayes that makes use of rhythmic percussion and acoustics in order to seek out and locate its prey hidden underneath a wooden surface," Lekkerkerk explained.

Mattering is the name given to the process by which a matter comes to its own. For Lekkerkerk, it is a crucial concept. "I employed this process of mattering through sound metaphorically, and moreover as an analogy to talk about what it means for an artist to instigate 'processes of mattering,' " he said.

"This is a means to come to terms with exterior material agency and agendas in times of the Anthropocene, an epoch in which humans have become a force on a geological scale. The exhibition is essentially positioned within this discussion. It looks for ways through artistic practices and asks what it means to take collective responsibility for the game at stake."

When Lekkerkerk submitted "Percussive Hunter" to Akbank Sanat International Curator Competition last year, he faced strong competition from other curators. Akbank Sanat's jury was equally strong, consisting of artistic director of The Kunsthalle Fridericianum, Susanne Pfeffer; chief curator of the Finnish Museum of Photography ,Anna-Kaisa Rastenberger,and co-founders of Art Reoriented, Sam Bardaouiland and Till Fellrath. The jury was particularly impressed by Lekkerkerk's choice of the metaphor of the hunt and his presentation of the artist figure as hunter.

I asked Lekkerkerk about the process from last year's competition to this year's exhibition. "The Akbank Sanat International Curator Competition has a competitive dimension," he said. "Obviously the competition is more introspective as there is no great awareness of the other contenders. It involves a personal outbalancing and determination of what subject and set of ideas or topic has urgency today and should, based on the remit of one's curatorial practice, rise to the occasion. The 'geostory' that is put forward in 'Percussive Hunter' was positively conceived by the jury, the participating artists and the general audience. ... At least I have an inclination to think so."

I realized how there is a clear distinction between the first and second floors of the exhibition. The first works you come across on the first floor - Carlos Irijalba's "Paused Sequence", which consists of fluorite drilling on an aluminum structure and Fran Meana's "The Immaterial Material #A" made from paper, magnets and metal shelves - have a more natural and traditional feel whereas the works on the second floor take full advantage of technology.

"One could say that the exhibition generates a path that starts with earthbound positions among material experimentations and geo-historical references," Lekkerkerk explained. "This is continued on the second floor with artistic examples visually advancing ideas around the Anthropocene, sonic objects and liquid states. The whole trajectory thus leading from the soil, from earthbound positions toward more light and fleeting ways of thinking of what it means to be a human today - human, as in the Latin word humus: 'from the soil.' "

When asked to reflect on Camile Henrot's video installation, Lekkerkerk said: " 'Grosse Fatigue' is one of those works with tremendous visual and intellectual impact. ... It confronts us with the 'atlas-malediction' of humans in classifying the earth through taxonomies and hierarchies with the human at the center. The work is particularly prominent for me. It shows the earth's complexities as being utterly fragmented, fleeting, constantly becoming, but never quite arriving."

Lekkerkerk has an impressive CV. He has worked at Stedelijk Museum Bureau Amsterdam and the David Roberts Art Foundation. He is also the founder of the Office for Curating in Rotterdam. Lekkerkerk's recent exhibition projects include the group exhibition John Smith, the Posthuman at the Bonnefantenmuseum, Maastricht and The Ringenberg Biennale at Schloss Ringenberg, Hamminkeln. He has contributed to numerous magazines including Art Licks, Cura and Metropolis M. Lekkerkerk was the recipient of the inaugural NEON Curatorial Award at the Whitechapel Gallery in 2012 in recognition of his "fiction- and literature-based approach to curating."

I asked Lekkerkerk whether this exhibition offers us a glimpse into the world of young contemporary artists, since most of the participants were born in 1980s. "Age is obviously not an important criterion in this kind of exercise although there might be a tendency from my side of working with artists that have become friends overtime and are indeed around the same age," Lekkerkerk said.

"In most of the cases I have invited the artists on the premise of specific, readily existing works, and hence there was no great sense of submission. The curator should also be a sparring partner in an open and ongoing discussion around the work and where the work might go, rather than passively waiting for a proposal."