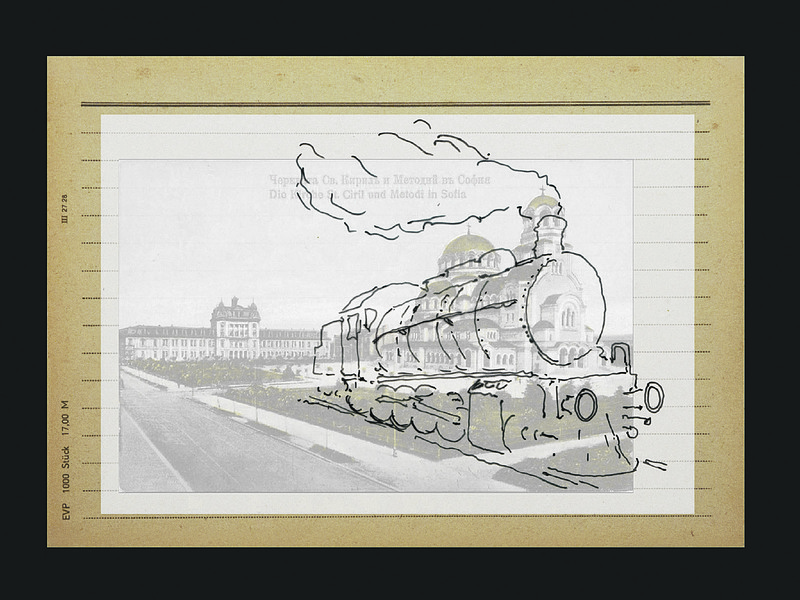 SALT exhibition gallery in Ankara presents an installation exhibition curated from the works of two artists, Esra Ersen and Antonio Cosentino, until June 6

SALT Ulus in Ankara will screen "A Possible History" for the first time in Turkey, along with "Casting for a Canary Opera" by Esra Ersen and "Escape from the Marmara Sea" by Antonio Cosentino. The artists' installations on language, time and space take the audience on a voyage of literary allusions and geographical references. The exhibition will continue until June 6.

A Possible History: When Thinking Some Play with the Mustache, Others Cross Arms (2013)

Esra Ersen's video installation "A Possible History" is a historical investigation throughout which geography and time overlap. The work describes the five days that the character E spends in Sofia, Bulgaria, in 2013. The story, which is narrated in third person, is accompanied by Ersen's drawings, texts and collected photographs.

E travels to Sofia on a quest to search for traces of the Ottoman voyagers and literary figures who traveled to the Balkans in the late 19th and early 20th centuries. The character performs a historical reading with the help of various texts as well.

Having gained independence from the Ottoman Empire at the end of the 1870s, Bulgaria then turned a blind eye to almost the entire Ottoman imperial period of its cultural history. Conditioned historicism exists in every nation-state that attempts to build a new identity - as was the case with the Republic of Turkey. For Turkey, this new identity was exemplified with the institution of a new capital city, and hence a parallel reading of Sofia and Ankara leads the audience to question the history and construction of both cities.

After the collapse of the socialist state in 1989, the cultural narration of Bulgaria began to open to include other ideas and possibilities, which led to a renewed interest in historical readings. In "A Possible History," this situation is explained with the following statement: "History is now everyone's hobby in the Balkans, which makes sense. After all, it's not microbiology or anything like that."

"Casting for a Canary Opera," also by Ersen, takes place in the assembly area of the Istanbul Canary Fanciers Association. The club's members stand in front of dozens of canary cages, reading aloud texts that Ersen had given them. In some scenes, canary songs and melodies played on local instruments are heard in the background as if accompanying the members' readings.

This particular association was chosen by the artist for this work because many civic initiatives, political parties, labor unions and bureaucrats in Turkey frequently express in their press statements that they are not simply the "Canary Fanciers Association."

The members read Ersen's selected statements and assert in different ways that they are not the "Canary Fanciers Association." In this manner, the work loosens the relation between image and text, as it refers to the current political agenda of Turkey.

"Casting for a Canary Opera" deconstructs the context and formation of meaning, which is established through seeing and hearing, and gives the audience the possibility to interpret this specific paradoxical connection.

Antonio Cosentino's installation consists of a handcrafted ship made from used tin cans and packaging, and a video that shows the artist transporting it on a trolley along İstiklal Avenue and across the streets of Beyoğlu, all the way to the Bosphorus.

Cosentino's ship proposes an engineering feat, housing various architectural components such as an amusement park and a helipad. The artist ironically draws attention to the people who had to leave and those still leaving this geography by using the image of a ship, while taking into account the Sea of Marmara as a point of departure as well as a zone of transition.

The boarding port of Cosentino's ship is in Kumkapı, an area that was formally an Armenian neighborhood, a place where the demographic, ethnic and spatial transformation of the city manifests itself. At the stern of the ship is a sign of Kumkapı that is pointing to its harbor. A short story by Sait Faik Abasıyanık about a child whose toy ship is sunk by other children is also an influence for the artist. By referring to this story, Cosentino reminds the audience of Abasıyanık's stance against the representations of minorities in Turkish literature with nationalist sentiments, starting with Tanzimat writers and continuing into the Republican era.

The artist references the micro ecosystems of city life by using recycled materials within his work, and in particular tin, which carries both an economic and cultural significance on the periphery of Istanbul. The installation not only implies a narrative about the accelerating material change of the city - as well as its socio-cultural transformation, especially from the 1970s to the present - but also traces the impact of the disappearance of places on the memory of individuals over the course of time.
Last Update: Apr 19, 2015 10:27 pm
RELATED TOPICS