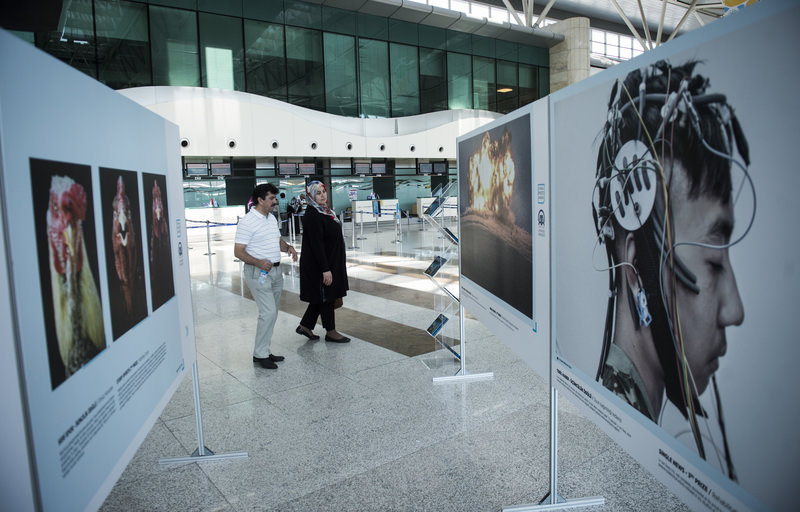 Organized by Anadolu Agency (AA), a photo exhibition showcasing the award-winning photographs of the Istanbul Photo Awards, which is Turkey's first and only news photography contest organized on the international level, will remain open until Aug. 8 in TAV Galeri Ankara. There were nearly 12,000 applications from 104 countries to the contest. Some of the award-winning photographs also won more awards, the Pulitzer Prize being the most prestigious, at other international contests.

Visitors who visit the Istanbul Photo Awards 2014 exhibition have a chance to see the visual summary of the significant global news events that happened last year. In the contest where singular and serial photographs were evaluated in the categories of news and sport photographs, Daniel Berehulak's photograph that was taken in Liberia during the Ebola epidemic, considered the most striking photograph in the exhibition, won photo of the year.

The contest's award-winning news photographs, which eternalize the unforgettable moments of 2014, provide a different perspective on the wars, diseases, conflicts and colorful moments from various regions. The Istanbul Photo Awards 2014 exhibits different shots of war, conflict, political crisis, terror attacks and natural disasters that occurred in 2014 in different regions around the world, including the civil war in Syria and the conflict in Ukraine.

A photograph titled "Messi," which was taken by Byhangst Matthias, came first in the sports photography category of the contest. The photograph shows famous footballer Lionel Messi's struggle against four opponents.

The exhibition was sponsored by Turkish Airlines and supported by the Promotion Fund of the Prime Ministry. It will then be transferred to the Adnan Menderes Airport in İzmir to be exhibited at the TAV İzmir Gallery between Aug. 11 and Aug. 25. Then the photographs will be displayed at the Shanghai Center of Photography on the invitation of one of the jury members, Shanghai Center of Photography director and Pulitzer Prize-winner, Liu Heung Shing. The exhibition can be visited in Shanghai between Sept. 1 and Sept. 15.

The jury chose award winners in the categories of Photo of the Year 2014, singular news, serial news, singular sport and serial sport. In addition to the photograph of the year, 11 photographers from seven countries were given awards in four categories. The photo of the year and first place participants are granted $8,000 while second place participants were given $3,000 and third place participants were awarded $1,500 in prize money. Detailed information about the contest can be found at: www.istanbulphotoawards.com and www.anadoluimages.com, which were specifically prepared for the contest.
Last Update: Jul 27, 2015 2:17 am
RELATED TOPICS