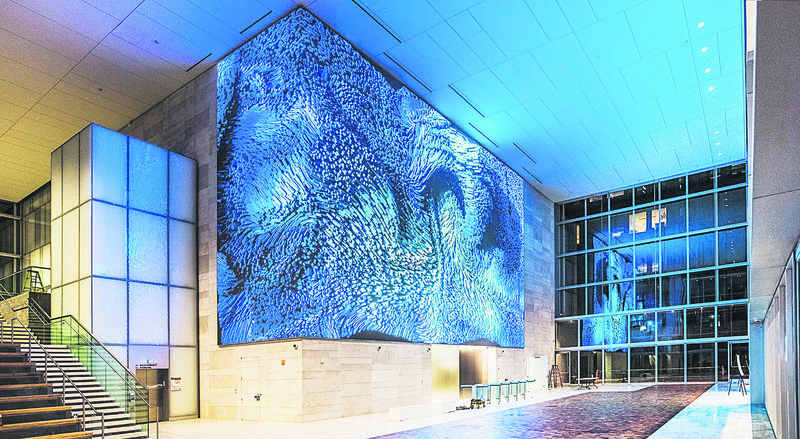 by Miraç Tapan Dec 01, 2015 12:00 am
The world's first visual data sculpture titled "Virtual Depictions" was created by Turkish media artist Refik Anadol and unveiled in San Francisco last week. Recognized internationally for his innovative projects and unique illustrations which blend art and technology, Anadol's latest project was introduced to the public at a ceremony overseen by representatives from major Silicon Valley companies including Google, Facebook and Twitter. The art exhibition was inaugurated by San Francisco mayor, Ed Lee and displayed on the wall of San Franscisco's new skyscraper 350 Mission Street. Speaking at the ceremony, the 30-year-old visionary artist said, "I wanted to create art work that can change according to the city and its vibes. With the help of technology, I aimed to create a work which has emotions, memory and perception."

Characterizing his art work as "media architecture," Anadol said he wanted to entertwine new media arts with architecture and bring the invisible into art form. "The idea was to connect things in a new way with San Francisco, and to bring a 21st-century approach to public art and to the experience of space," he added. He also commented on future projects, saying that technology has changed the perception of art and our artistic reflexes. "We are in an exciting new era. I want to create more original and site-specific projects in the future," he said.

The biggest media installation on the West Coast, Anadol's art work "Virtual Depictions: San Francisco" is located inside the New Salesforce building at 350 Mission Street and people can view it from the street, in high definition. The artwork collects social network data including tweets, Facebook posts and other social media interactions made by the people of San Francisco and projects them in art form. Running in loops of 90 minutes and programmed afresh every day, the art work offers a constantly changing display of information. Although the images that are displayed seem abstract, the artist uses certain algorithms to transform the social network data into various shapes and colors. "Virtual Depictions: San Francisco" is currently running during evening hours and will be fully functional in January 2016.

Born in 1985 in Istanbul, Anadol holds a Bachelor's Degree in Photography and Video, a Master's Degree in Visual Communication Design from Istanbul Bilgi University and a second Master's of Media Art from University of California. He is a media artist focusing on live audio and video performances, huge installations and architectural photography. His works mostly aim to explore the space between the digital and physical by creating a relationship between architecture and media arts. Anadol has been granted many awards for his works, including the Microsoft Research's Best Vision Award, the UCLA Art and Architecture Moss Award, the University of California Institute for Research in the Arts' Award and the CODA Video Award. His site-specific installations can be seen at the Walt Disney Concert Hall, the Hammer Museum in the U.S., the International Digital Arts Biennial Montreal in Canada, the Santralistanbul Contemporary Art Center and Istanbul Design Biennia in Turkey as well as SANAA's School of Design Building in Germany. Anadol is also co-founder and creative director at Antilop.co and currently a lecturer in UCLA's department of design media arts in Los Angeles.
RELATED TOPICS