A young artist explores the selfie pandemic in a new show 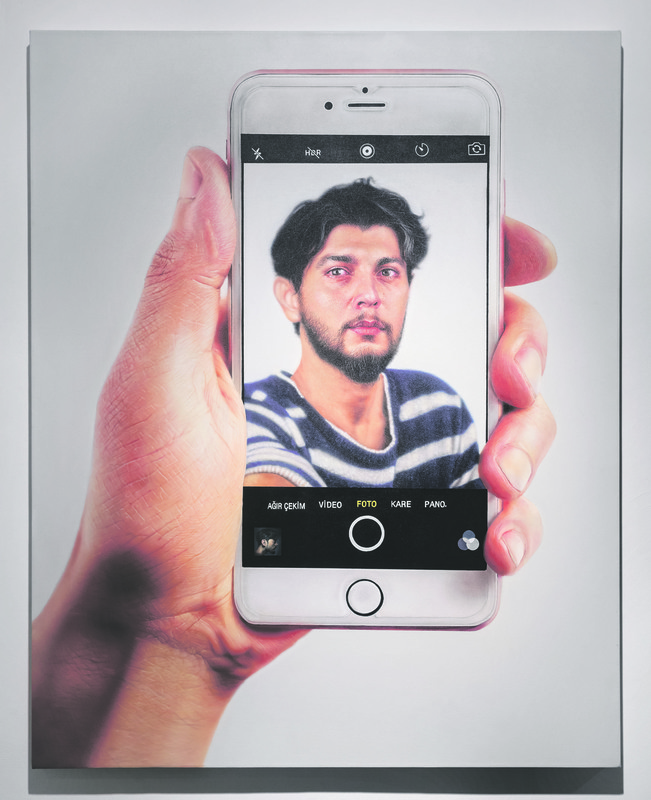 ‘Fingerprint,' the first major solo exhibition of young artist Alican Leblebici, explores the issue of loneliness and frenzy of getting like's through the selfie pandemic

He is only 25 and has never had a major personal show before. But Alican Leblebici managed to be the talk of the town in Istanbul's art scene last week with his exhibition "Fingerprint," which is on display at the Pilot Gallery until January 23. At the opening of Leblebici's debut show, there was excitement among critics, collectors and curators who wandered among portraits of this young artist from Adıyaman. A graduate of Marmara University's Teaching Department of Painting, Leblebici participated in group exhibitions in the past and made his big debut with the Akbank Contemporary Artists Prize exhibition in 2014. Last week, Leblebici was very visible in the show's opening, not only with his physical presence but also with his hyper-realistic self-portraits. 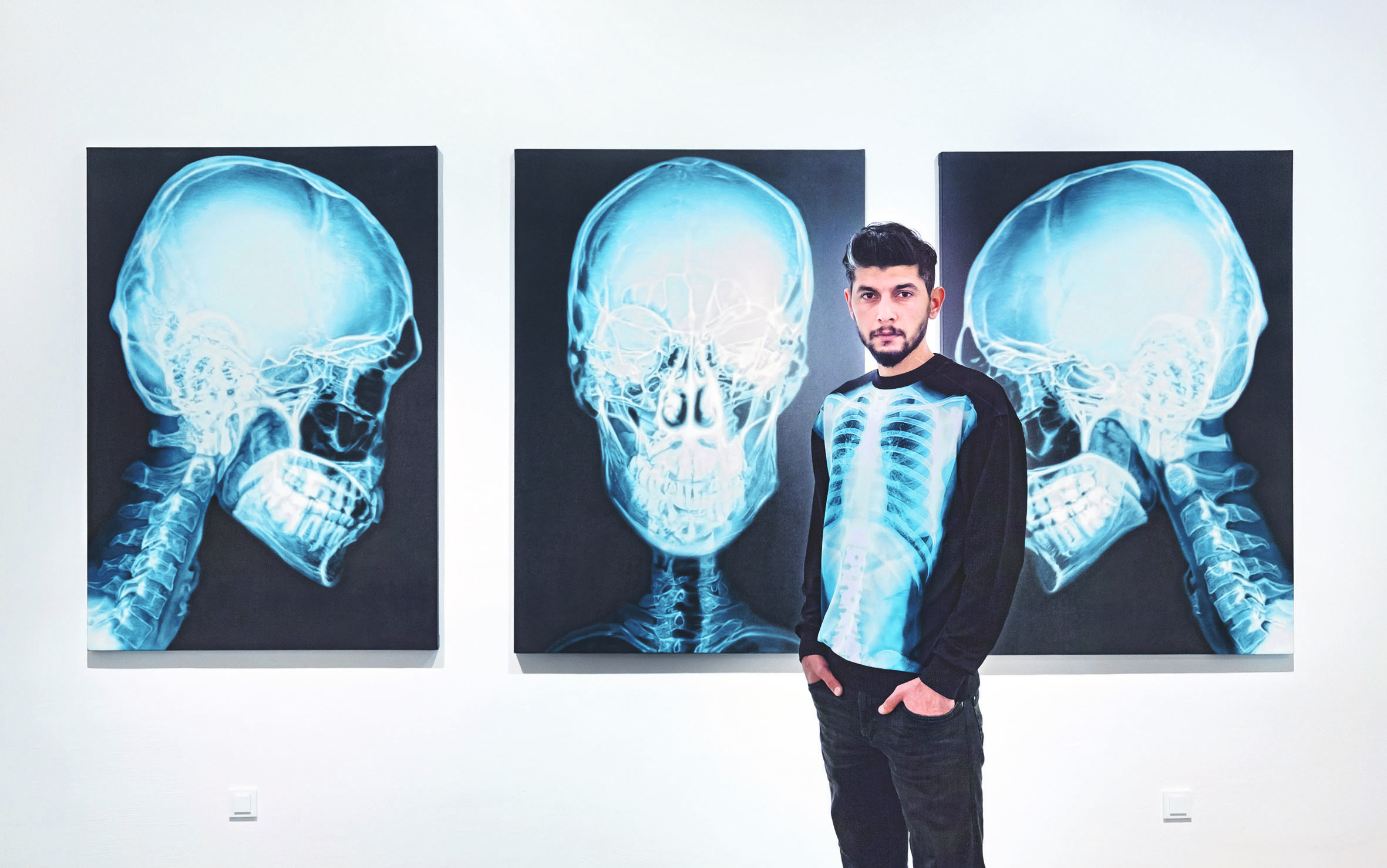 The first thing that strikes you in "Fingerprints" is Leblebici's interest in depicting human bodies -- his own body and a number of others. They open themselves to the gaze of visitors, which creates a special kind of intimacy inside the gallery space. The second common thread concerns Leblebici's technique: In all of his paintings, he has used acrylic and oil on canvas. It is refreshing to not see any video works, sculptures or installations in a young artist's Istanbul exhibition for a change.

On the face of it, Leblebici's works in "Fingerprint" can be divided into two groups: There is a number of "inner portraits," works like "Memento Mori" (Mug Shot), which offers an X-ray view of the artist's head. "Armor," which depicts Leblebici's own ribs, is similarly focused on the inner body. Other works depict faces and hands and reveal political, cultural and social affiliations of their subjects. But the separation is an illusionary one: Inner portraits tell us a lot about the bodies of their subjects, while hand and face paintings offer insights into their subjects' inner thoughts. 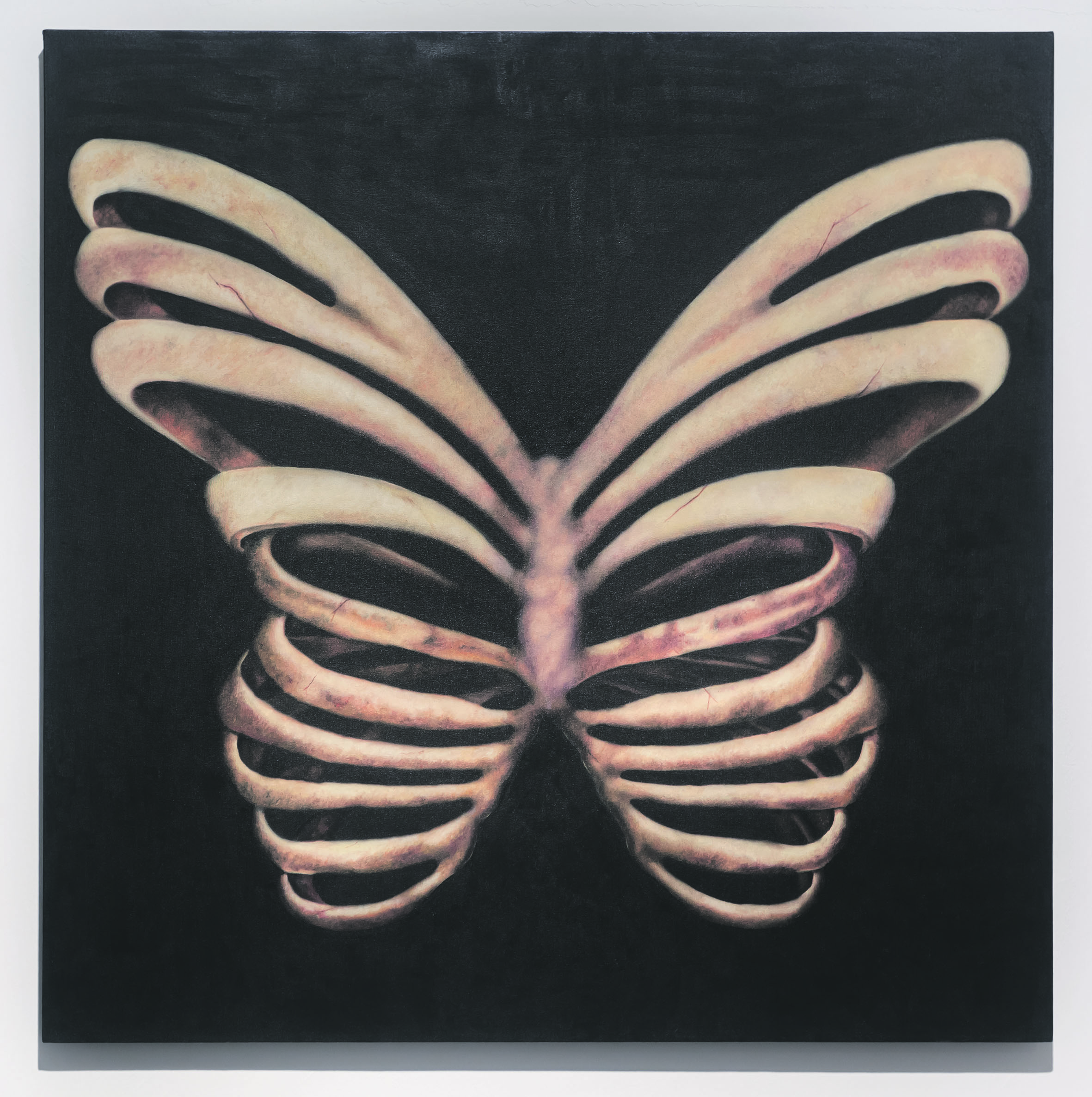 "For centuries, tattoos have conveyed different meanings and served different functions as a way of gracing the body, a mark of punishment, a badge of affiliation to a group and a tribe or a symbol of loyalty to a loved one. Today, it has become a popular object of the consumer culture, widely available regardless of class, gender and occupation and even fashionable accessories," the exhibition program informs us. "Leblebici has chased up a number of 'genuine' tattoos, which he sees as sub-cultural signs and portrayed the tattoos associated with criminals, marginalized and sub-cultural groups instead of the tattoos that we see on bodies idealized by the current cultural values."

"My interest in tattoos can be explained by my interest in portraits and self-portraits," Leblebici told Daily Sabah last week. "A tattoo is a kind of self-portrait painted on one's own skin. For middle and upper classes, tattoos have become products of consumption. I am more interested in the underground aspects of tattoos. I have explored tattoos of members of Istanbul punk groups that show their affiliation to their groups; I also looked at tattoos made in prisons."

There is an excellent work entitled "Selfie Portrait" that depicts the artist's hand holding an iPhone at the moment of taking a selfie. "I worked on this work for more than 200 hours," Leblebici said. "It is my most recent self-portrait. Now, thanks to selfies taken with smart phones that offer modern day versions of self-portraits, it takes only a second to produce your self-image. This was the case when I took the selfie you see in that painting. It took a minute or two. By its nature, a selfie is a way of self-expression that has a very short life span. It is very quickly consumed and is also very realistic. We have to accept that human communication takes place online and selfies have become part of this. But I still believe that my 'Selfie Portrait' stands counter to the swift production and consumption cycle offered by the selfie." This work, according to the exhibition program "reveals the issue of loneliness and frenzy of getting likes through the selfie pandemic." 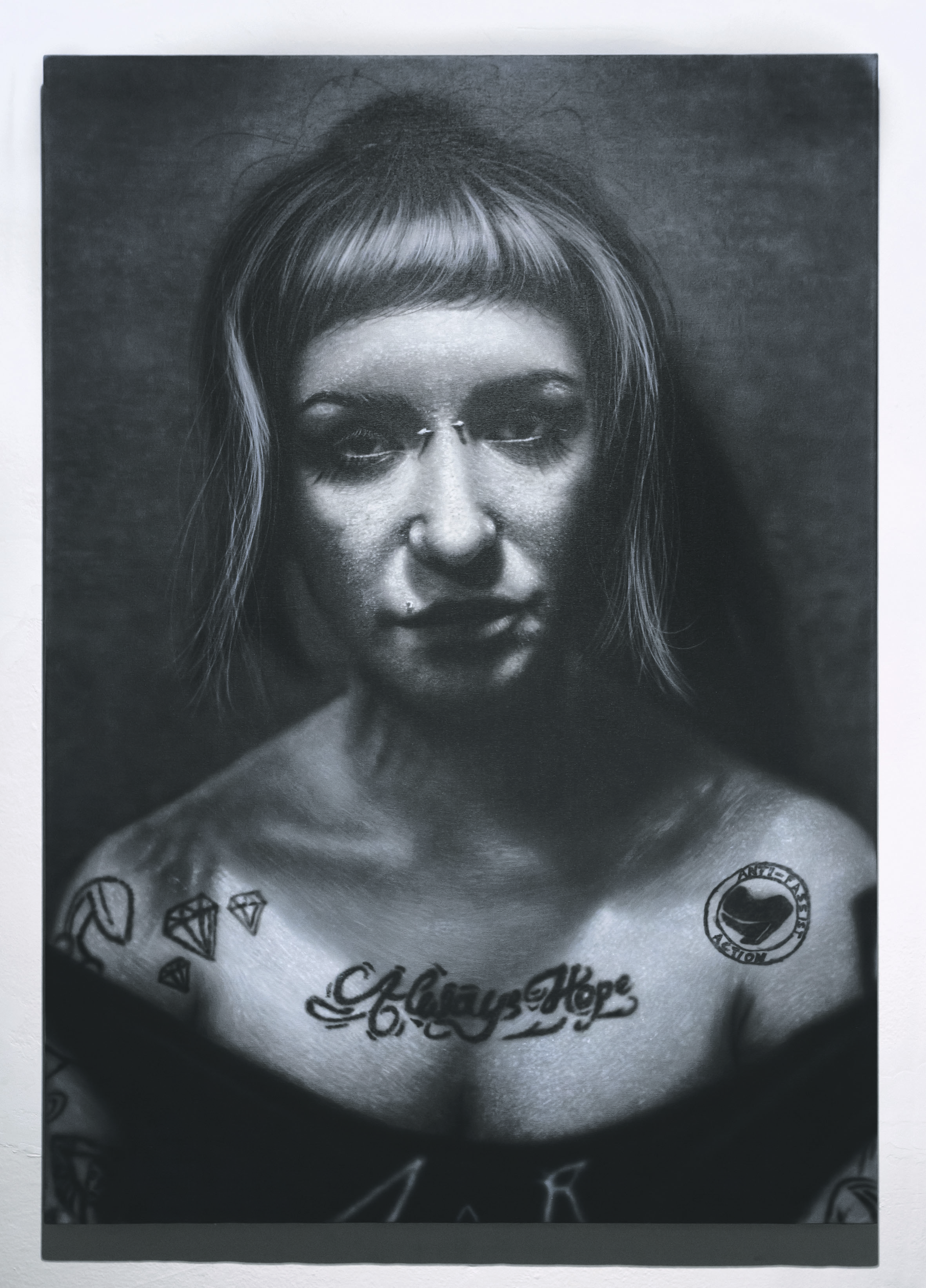 "Self-Portrait," an image of Leblebici so hyper-realistic that officials had not been able to realize it was a painting, rather than a real photograph, is another highlight of the show. "The first work in his portraits series is his large-than-life self-portrait. He then takes the photograph of this original painting executed in a photorealist style and uses these passport-size prints in different identification cards, including a national ID card and a library card. Among the works on display will be the original painting, the passport-size photos as well as the identity cards."

"Since my childhood, I have enjoyed surprising people and playing tricks on them," Leblebici said. "I like to surprise others and myself too. I didn't just want to produce a self-portrait here. I wanted to add a new layer to it and play with the viewer's perceptions. I took photographs of my painting. Then I took those photographs, which had the right dimensions, to the registration office."

Another work, entitled "Armor" focuses on innocence. For this work Leblebici has turned his rib cage into a butterfly. "Armor" has similarities with another painting in the exhibition that depicts "a usual suspect's X-ray images taken while in custody. Frontal and profile mug shots are now replaced by imaging machines that reveal the inside of the body. The artist invites the audience not only to look into his eyes, but also to look through his soul."

Leblebici told Daily Sabah he does not believe in the outer/inner body distinction. "They complement each other," he said. "Our skins are not the only places where we find traces. Our life stories penetrate inside our bodies as well. This is why I wanted to explore the inner body here with X ray images of my head and also produced a painting of my rib cage. Otherwise, the self-portrait I am offering here would be an incomplete one."
RELATED TOPICS