Opera and theater in full swing for the new year 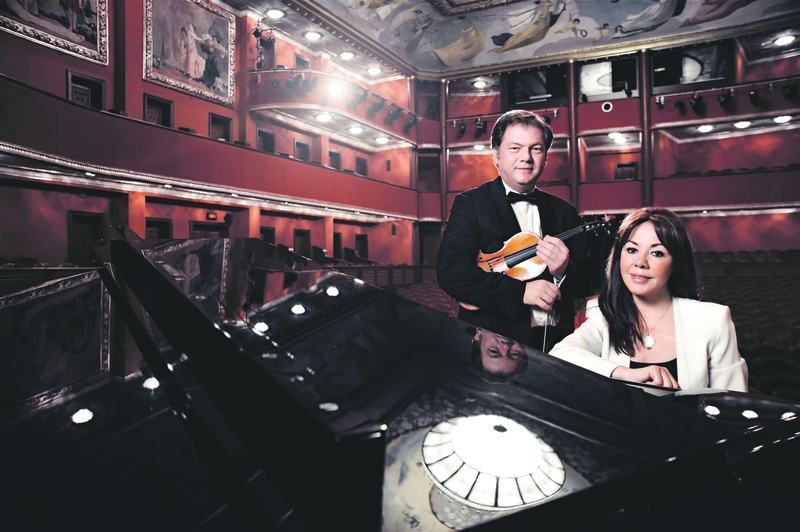 One of the most frequented art spaces in Istanbul, the Leyla Gencer Opera and Art Center will continue to host accomplished opera singers as well as musical and theatrical performances in January

Established in 2013 by the Bakırköy Municipality to stage opera productions, concerts and plays, the Leyla Gencer Opera and Art Center has a full program with various events and stage performances in the new season. With a 10,000-square-meter indoor space, 300-square-meter stage, orchestra pit and 1,000-seat capacity, the Leyla Gencer Opera and Art Center - the only opera stage located on the European side of Istanbul - is as good as any international opera stage in the world.

On Jan. 9, the opera and arts center welcomes the New Year with pianist Şevki Karayel and the Traverse Ensemble's concert. The concert will commence with the piano quintet of German composer Robert Schumann - who composed his energetic and romantic compositions for his wife, Clara Schumann, one of the prominent female composers of her time. Karayel and the Traverse Ensemble promises an incredible music feast with a rich and entertaining repertoire including pieces by Bach, Shostakovich, Strauss and Piazzola, as well as the rhythms of tango and waltz. The concert will offer a colorful and positive night with a program filled with virtuoso compositions. Karayel and the Traverse Ensemble will be accompanied by violinists Mehmet Yasemin and İmge Tılıf, alto player Filip Kowalski and cellist Gözde Yaşar on stage during the first concert of the year at the Leyla Gencer Opera and Art Center. The tickets for the performance are TL 60 ($20.58) and TL 40. BAKKART holders and students get a 20 percent discount on the ticket price.

Written by Natali Boğosyan as a part of her musical and theatrical projects, the pastiche opera "Doretta'nın Altın Rüyası" (Doretta's Golden Dream) will make its world premiere on Jan. 10 at the Leyla Gencer Opera and Art Center. The story of "Doretta'nın Altın Rüyası" is inspired from the character Doretta, which is mentioned in Puccini's "La Rondine." The opera takes the story from where Puccini ends and turns it into an epic love story. The arias and lieds - a type of German song - selected from a classical music repertoire in order to support the plot of the opera will be blended with the impromptu contrabass melodies under the conductorship of maestro Arda Ardaşes Agoşyan. Soprano Natali Boğosyan undertakes the leading role of Doretta in this innovative opera and is accompanied by successful maestro and pianist Orçun Orçunsel on stage. Moreover, the overture of the opera will be played by Boğosyan and Orçunsel together with four hands. The performance, which is full of surprises, will also have a special guest onstage: Veteran pantomime artist Vecihi Ofluoğlu will portray Morpheus, the Greek god of dreams. Tickets for this performance are TL 35 and TL 25. People over the age of 65, BAKKART holders and students get a 20 percent discount on the ticket price.

Cihat Aşkın and Mehru Ensari's admired project titled "Minyatürler" (Miniatures) is getting ready to be performed at the Leyla Gencer Opera and Art center once again on Jan. 15. Aşkın brings many important compositions from different parts of Anatolia together under the same roof for "Minyatürler, which carries the traces of the most important composers of Classical Turkish Music. Aşkın, who completed the entire composition in five-and-a-half hours in 1997, builds a bridge between the West and East, and successfully manages to blend ballads with the rhythms of tango. Tickets for this performance are TL 50 and TL 30. People over the age of 65, BAKKART holders and students get a 20 percent discount on the ticket price.

Writer Aret Vartanyan will come together with his readers as a part of his panel session "Gerçekten Yaşıyor Musun?" (Are We Really Living?) on Jan. 16 at the Leyla Gencer Opera and Art Center. Vartanyan said his purpose in life is "to serve a world that allows people to unite with love without leaving anyone behind." The writer believes in humanity before anything else. Vartanyan managed to make a difference in the lives of hundreds of thousands of people with his writings, which emphasize the importance of humanity beyond any labels such as religion, language, race, title, gender or financial status. In his panel session, the writer aims to shed light on different aspects of life by blending the works of thousands of consultants and his own. Tickets for this performance are TL 50, and people over the age of 65, BAKKART holders and students get a 20 percent discount on the ticket price.
RELATED TOPICS