Turkish professor reflects on coups and their representations in art 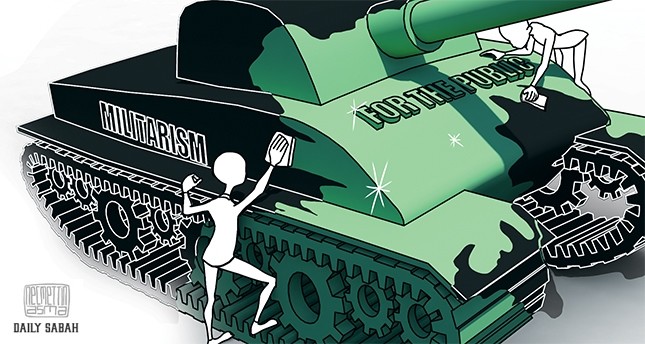 Hasan Bülent Kahraman, a professor of political and art philosophy at Kadir Has University, was at a dinner party on July 15, 2016, the day of the attempted military coup. Among the guests were Şükrü Hanioğlu, a professor of late Ottoman history in Princeton University; the two Turkish scholars together heard the first news of soldiers patrolling Istanbul's streets. "Moments after we learned that bridges in Istanbul were closed to the public by soldiers, I received a text message from Ankara about F-16 jets flying low in the air," Kahraman said in an interview with Daily Sabah last week. "Immediately I told people in the restaurant that this was a coup."

Kahraman, a columnist at Sabah newspaper, author of numerous books on art and history and the vice rector of Kadir Has University, where we conducted the interview, has lived through a series of coups in his life. "I lived through the March 12, 1971 and September 12, 1980 coups," he said. "Reflecting through my experiences, the first thing I asked that night was where the coup came from. Was it implemented through the chain of command?"

Sometime later, Kahraman left the restaurant and tried to go back to his apartment. "That was quite a difficult thing to do," he said. "The streets were packed. Once in my apartment I watched calls to go outside, made by the Turkish Prime Minister and the President. I also heard salaams from the mosques and decided to go outside." Kahraman wandered in the streets of Bomonti, an Istanbul neighborhood that has lately become popular among artists and authors.

As a historian of Turkish art and literature, Kahraman is in an ideal place to predict how the attempted coup will be represented in Turkish art. "In Turkey we have a very rich 'coup literature'," he said. " 'Coup novels' are a genre of our literature. There are novels dedicated to describing the May 27, 1960 coup, for example. From Attila İlhan to Vedat Türkali, numerous authors have contributed to it, and looked at the atmosphere before and after that coup."

Another sub-genre of the Turkish novel is the so-called 'March 12 novel', books that focus on the March 12, 1971 coup. "From Sevgi Soysal to Erdal Öz, March 12 novel was a very comprehensive genre," Kahraman said. "In contrast, September 12, 1980 coup was not reflected quite on that level in Turkish literature. Of course, there had been novels describing the atmosphere before and after the September 12 coup, but they have not been as significant. And when we come to July 15, I believe that this attempted coup will not be discussed through literature but through contemporary art."

According to Kahraman, this is a sign of how the artistic consciousness of Turkey has shifted. "I have long emphasized that the talent that had been located in the field of literature in the past has changed its location," he said. "What we can call 'the accumulation of talent' is now to be found in the field of contemporary art. In other words, contemporary art has taken the place of poetry and the novel." Kahraman remembers writers criticizing his argument: "shortly afterwards, they, too, started expressing themselves through contemporary art."

Discussing the artistic representations of the February 28, 1997 coup, Kahraman pointed to the importance of the era between 1991 and 1997. "This was when Turkey came across new concepts," he said. "We don't show them as much attention today but the concept of 'the public sphere' ('Öffentlichkeit' in German, the language in which Jürgen Habermas analyzed the concept) appeared during that period. Memory was another concept that came to the fore in those years, alongside identity, belonging and civil society. At the time, Turkish contemporary art was in its embryonic state and it was on these concepts that it was founded. Turkish contemporary art's real boom came after the year 2000. The concepts that were used in the years prior to the February 28 coup were used in contemporary art works."

According to Kahraman, there is still a certain distance between contemporary art and conservative Turks. "As a result, pious people discussed the issues surrounding the February 28 coup through literature," he said. "The issues of the headscarf ban and female identity were questioned mostly through novels and also through poets among conservatives."

Meanwhile, among secular circles, "the pendulum swung all the way to the other side and those issues were problematized through contemporary art. The most notable exception here is Orhan Pamuk, whose novel the Snow is arguably the best literary representation of the February 28 coup. Among conservative writers, I am most impressed by the work of conservative women writers who wrote about these issues."

He added: "Contemporary artists like Şener Özmen and Halil Altındere, who emerged in the 1990s, started producing their best works in the 2000s. The transformation of the contemporary art scene began with groups like Hafriyat and Extramücadele. We should add Bedri Baykam's name to this group: although he does not share their political views, Baykam is a crucial part of that movement of artistic and intellectual production."

Kahraman says there will now be a western thirst for Turkish contemporary art works discussing the failed coup on July 15 and expects to see numerous exhibitions in the future. "When will it happen? Not tomorrow. People are still living through their shocks and traumas. These are extraordinary times. After things are settled, the artistic representations will follow," he said.
RELATED TOPICS