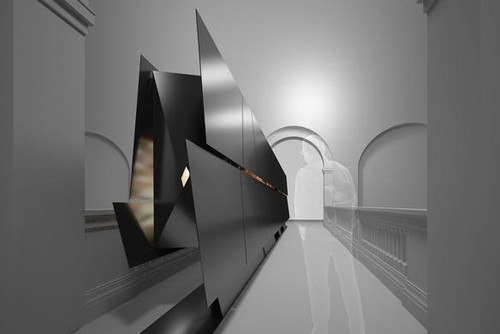 by Daily Sabah Aug 08, 2016 12:00 am
An installation dedicated to one of the greatest Turkish novelists Sabahattin Ali's bestselling classic, "Kürk Mantolu Madonna" (Madonna in a Fur Coat) will be featured at the London Design Festival being held from Sept. 17-25. According to the article released by architecture magazine, the installation will function as a reading room for festival participants. Designed by Turkey-based Tabanlıoğlu Architecture, the installation titled, "Beloved / Reading Room," has been erected in a 13-meter-length black box covered in mirrors.

The installation will be placed at the bridge in the Medieval and Renaissance Gallery of the prominent Victoria and Albert Museum where readers will have a chance to experience the novel through animations reflected in the mirrors, lighting, voices and scripts. The designers of the installation said that their aim is to promote Ali's classic novel which is still regarded as a bestseller 73 years after first being published.

"Madonna in a Fur Coat" was first published in 1943 and is still a popular novel among Turkish readers. Set in post-World War I Germany in the city of Berlin in the 1930s, the story tells of the love affair between Turkish student Raif Efendi and German singer, Maria Puder. In the first part of the book, Ali narrates rural life during the early years of the Republic of Turkey before Raif, a shy and melancholic young man, travels to Germany at his father's request. Later, the book explores life in Berlin and Raif's meeting with Maria, who becomes the love of his life.

"Madonna in a Fur Coat" has already been translated into 17 languages including French, Russian, Italian and German, with four German editions already published. Translated by Maureen Freely and Alexander Dawe, Ali's acclaimed novel was published by Penguin Classics in English last spring. So far, Penguin Classics has released 850,000 copies of the book, and it is expected to reach 1 million sales by the end of the year.
Last Update: Aug 08, 2016 1:14 am
RELATED TOPICS