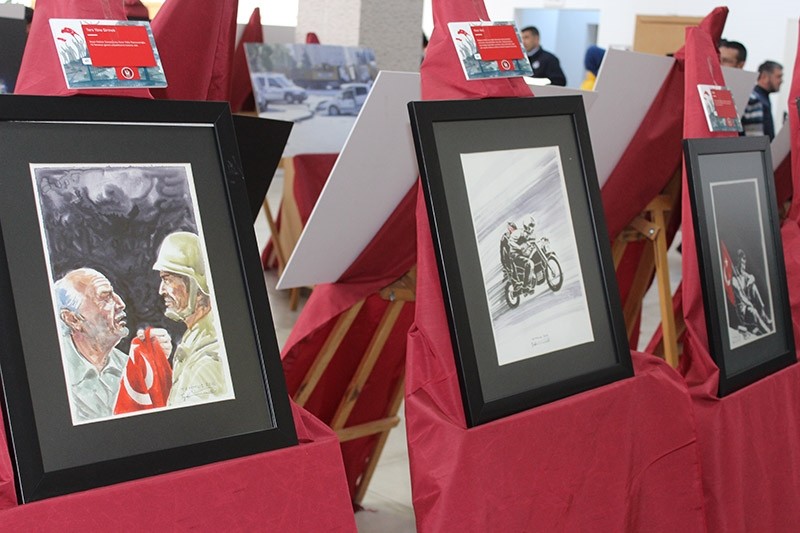 The exhibition opened at the Keçiören Municipality Mevlana Culture and Sports Center with the support of the Keçiören and Pendik municipalities. AK Party Ankara deputy, Emrullah İşler, spoke at its opening, drawing attention to the fact that the events of July 15 should be remembered in future years.

"July 15 has set an example in terms of showing the democracy of the Turkish nation to the whole world," İşler said.

Keçiören Mayor Mustafa Ak stated that, with the opening of the exhibition as a reminder, everyone could continue to experience the struggle and spirit displayed on July 15. "Every person who died on July 15 had a separate story, and you can find those stories in these works [of art]," Ak said.

Painter Hemmatirad also expressed his pleasure in exhibiting his paintings in Ankara, but added solemnly, "May we never experience a horrible night like July 15 again."

The title of the exhibition, "Archer's Hill," refers to the 625 Battle of Uhud between the Prophet Muhammad and his army of Muslims from Media and the Quraish tribes of Mecca.

During the battle, a group of Muslim archers breached Muhammad's orders to stay on the hill and left their assigned posts to raid a Meccan camp. This allowed for a surprise attack from the Meccan cavalry and brought chaos to the Muslim ranks.

The art exhibition, along with a collection of short stories, will be open to the public until February 22.