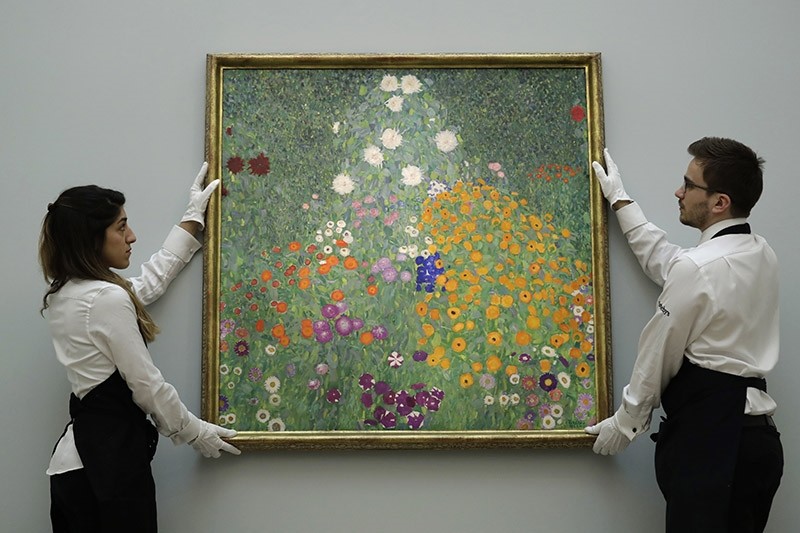 This is a Wednesday, Feb. 22, 2017, file photo of Sotheby's auction house staff as they pose for photographers with Austrian artist Gustav Klimt's ,Bauerngarten (Blumengarten), during a photocall at their premises in London. (AP Photo)
by Compiled from Wire Services Mar 03, 2017 12:00 am

A painting of flowers by Gustav Klimt sold in London for 48 million pounds ($59 million), a record for a work by the Austrian artist and the third-highest price for any work sold at auction in Europe, Sotheby's said on Thursday.

Described in the auction catalogue as a masterpiece of Viennese fin-de-siecle art, "Bauerngarten", completed in 1907, depicts poppies, daisies, zinnia and roses in full bloom in a garden.

It was the star attraction at Sotheby's sale of impressionist, modern and surrealist art, which took place on Wednesday evening.

This has been a strong week for modern art auctions in London. Sotheby's sale on Wednesday raised a total of 194.7 million pounds ($240.8 million). The auction house says that is a record for a London auction.

Top lots included Pablo Picasso's "Tomato Plant," which sold for 17 million pounds ($21 million), a record for a still life by the Spanish artist.

"Tonight's outstanding result is a new benchmark for London sales as much as it is a statement on the momentum of the global art market in 2017," said Helena Newman, chairman of Sotheby's Europe, in a statement.

Sotheby's said another highlight of its Wednesday sale was Pablo Picasso's 1944 work "Plant de tomates", which sold for 17 million pounds.

The auction also set a record for a work by Alfred Sisley, a British impressionist who worked mostly in France. His 1874 painting "Effet de neige a Louveciennes" sold for 7.4 million pounds.