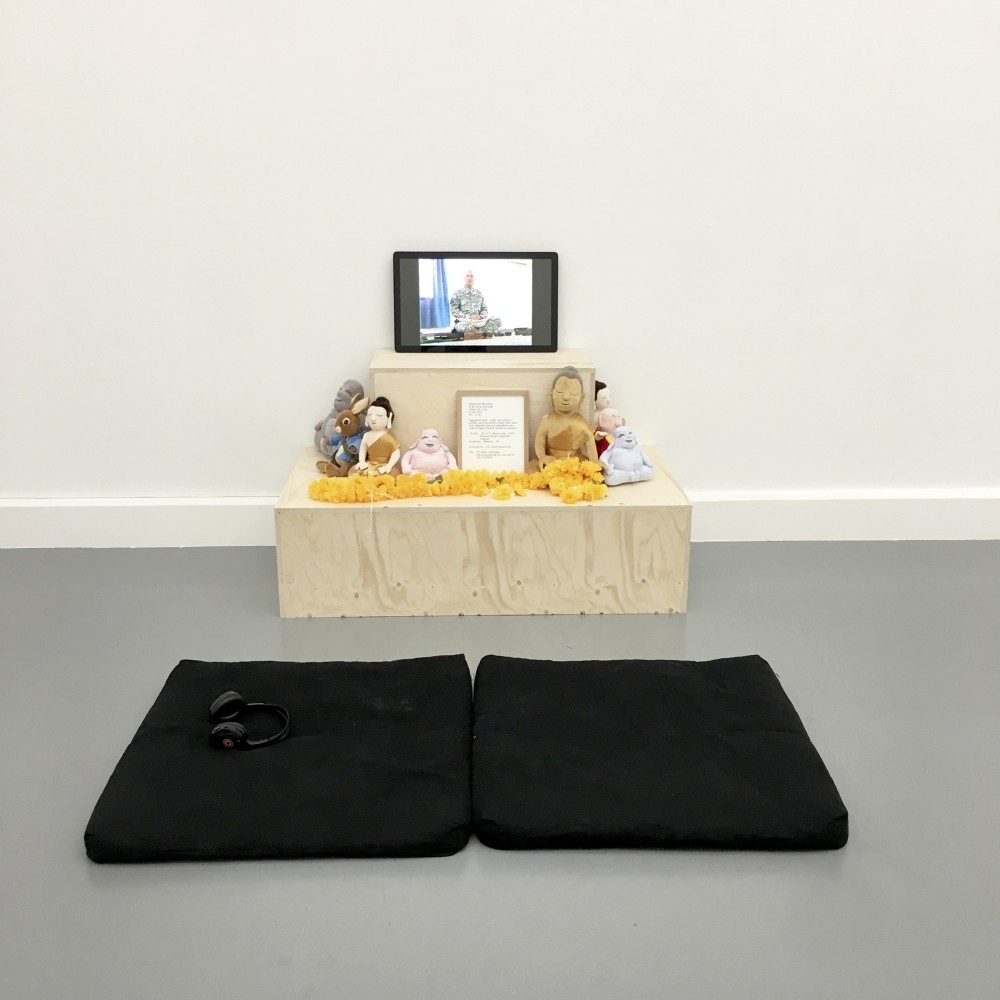 In her work u201cAmerican Buddhistu201d (2016) Jafri focuses on meditation sessions of American Buddhist soldiers. Jafri uses single-channel video, some Buddha pillows around screen. To watch the video you sit on pillows and u201cparticipateu201d in the meditation.
by Cihad Caner
Mar 07, 2017 12:00 am

Dealing with decolonization in a unique way, Pakistani artist Maryam Jafri's works are now being showcased at an exhibition at the Dutch Van Abbemuseum

Maryam Jafri, born in Karachi in 1972, is an artist working across media and genres. Her works are often marked by a visual language poised between film and theatre and a series of narrative experiments, oscillating between script and document.

"Independence day 1934-1975" is the strongest piece in the exhibition and features over 60 archival photos culled from more than 30 archives of various Asian, Middle Eastern, and African nations, including Algeria, Tunisia, Syria, Burundi, Burkina Faso and the Democratic Republic of Congo.

The photos show scenes of the countries' first Independence Day ceremonies, once freed from the clasps of colonialist powers like the Netherlands, France, Portugal and the U.K.

Jafri arranged the images according to the type of event, whether parades, celebrations or addresses to the nation. Although the protagonists differ, the photos in each category are remarkably similar, something that "shows how persistently the norms of the colonial power continued to inform decolonized nations."

"In order to talk about decolonization, colonialism needs to end. But it is still going on. It just changed its ways with neoliberal politics, now we are all part of it," noted artist Tabita Rezaire, in a lecture on decolonization that I attended in Rotterdam recently.

Although Jafri's way of dealing with this issue seems documentary, with the captions for each constellation upends conventions of the documentary image. In this way, she opens a fresh path to her own political and economic critique.

The Iraqi war may be one of the subjects that became popular among western artists but Jafri's response to this subject is rather different.

We are all familiar with the images of the war in Iraq, however this image of the Iraqi war was unusual. Her usage of Buddha pillows refers to the commodification of the character itself. Next to the video we see a small bronze sculpture of Saddam Hussein that was being toppled in Baghdad in 2003.

Jafri intervenes with the work "Meditation Square (2016)," the iconic sculpture of Saddam by hanging a Buddhist paternoster to its neck, adding a sense of humor to political subjects.

Fair Trade and natural products are not real according to Slovenian philosopher Slavoj Zizek. He calls the feelings of people who buy these products as "Coffee Karma."

"You think you buy a cup of coffee and save the world! You feel like you did a lot for the coffee farmers in Africa by buying Fair Trade brands. No! They are just consequences of neoliberal politics and it is the new way to sell more products," Zizek says in his documentary film, "First as Tragedy, Then as Farce."

Jafri's video work "Mouthfeel, 2014" may refer to Zizek's theory about these types of products. It features an intense conversation between a couple in a car that is talking about the "multinational companies, exposes slippery ethics, risks of bottom-line profiteering and lies of convenience."

Andy Warhol's "Campbell's Soup Cans" (1962) is one of the well-known pieces of pop art ever.

Maryam Jafri's interest with pop art is quite obvious as she explains in her interview, but from a completely different point of view.

"Generic Corner" (2015) is a work that uses generic products that were cheap groceries and everyday household items that appeared in supermarkets across the U.S. in the late 70's and 80's contrary to Warhol.

Although these unlabeled black and white products look fancy and minimal, they were considered a sign of poverty and social stigma during that period.

The Van Abbemuseum was one of Europe's first public contemporary art museums. The museum's collection of around 2700 works of art includes key works and archives by Lissitzky, Picasso, Kokoschka, Chagall, Beuys, McCarthy, Daniels and Körmeling.