Rare works from Ottoman era will be auctioned in London 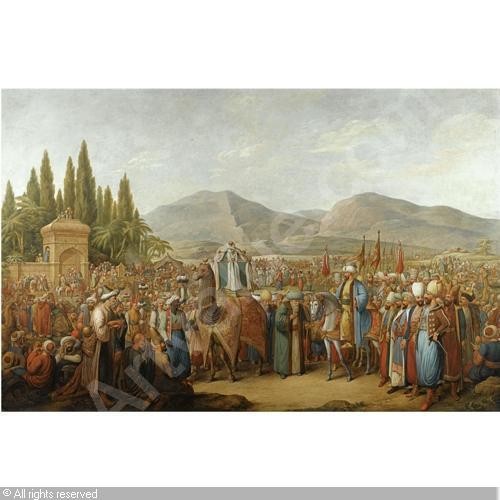 Sotheby's Auction House, one of the leading auction houses in the world will be hosting the "Arts of the Islamic World" auction when many rare pieces from the Ottoman Era will be auctioned next Wednesday, April 26.

One of the most popular pieces of this year's auction is the painting depicting the 19th century Hajj journey of the Ottoman caravan next week of Bohemian painter Georg Emmanuel Opiz, named "The Arrival of Mahmal at an Oasis en Route to Mecca" and works of Fahrelnisa Zeid, who was one of the leading names of the Turkish modern art. Many other works from the Ottoman times will be displayed at "the Middle East and Orientalist"[o1] Art Week, organized by Sotheby's every year and looked forward to with many collectors and art lovers all around the world. 99 works to be displayed under the categories of the Orientalist Sale and the 20th Century Middle Eastern Art are expected to be sold for prices ranging between 2,000 euros and 1.5 million euros on April 25.

Speaking to Anadolu Agency, Sotheby's' 19th Century Paintings and Orientalist Art Department Director Claude Piening said that the painting of Opiz was very rare and it's exceptional for such unique and valuable pieces to arrive to auction markets. The Prague-born painter is thought to have completed the painting between 1810 and 1815 and Piening said that they're expecting the painting to be sold for 950,000 euros to 1.5 million euros.

"This painting offers so much detail and probably depicts arrival of an Ottoman caravan which was on its way to Mecca from Istanbul to an oasis in Syria with so many cultural details of the time. We see portraits within portraits; there are about few hundred portraits here and the richness and variety of guns, fabric and details turn this painting into a document of time," said Piening. He added that the interest in historical pieces from the Ottoman times was high especially within the past decade all around the world.

There is another category that will go on auction titled "Arts of the Islamic World." A striking work at the collection is Fahrelnisa Zeid's six meter high and two meter wide "Göğe Doğru" (Toward the Sky) painting. Being crowned as a princess after her marriage to the Jordanian Prince Amir Zeid, this is the first time a new work of Zeid is being displayed since 1957 and is the largest piece at the collection and expected to be sold for approximately 750,000 euros. As many as 240 works to be displayed at the auction are expected to be sold between 3,000 euros and 850,000 euros.