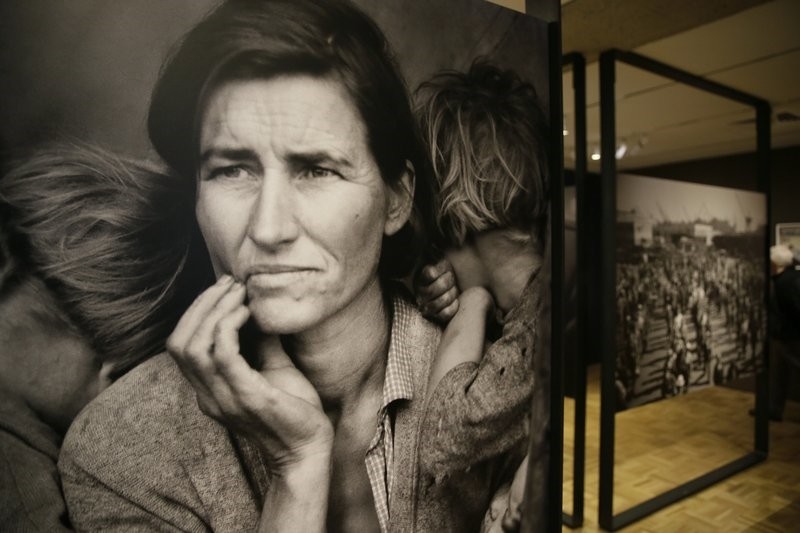 A California museum is showcasing the photographs of Dorothea Lange, whose work highlighted the lives of impoverished migrants and unemployed laborers during the U.S. Great Depression and Japanese Americans incarcerated during World War II.

An image titled "Migrant Mother" became the late photographer's most famous work, capturing the dirt and despair of that era through the eyes of a 32-year-old woman who had just sold her car tires for food.

The photograph, digitally scanned and enlarged, is a dominant feature of a new exhibit at the Oakland Museum of California called "Dorothea Lange: Politics of Seeing." The exhibit of 100 of Lange's photographs includes Dust Bowl migrants, Japanese-Americans incarcerated during World War II, the homeless and postwar urban decline.

Drew Johnson, who curated the show, said Lange's focus on poverty is timely in an age of economic disparity. The forced relocation of Japanese-Americans during WWII echoes today's debate over proposed travel bans, he said, and her postwar work on changing cities precedes battles over gentrification in places like San Francisco and Oakland.

"We live in troubled times, as you know, and I think it is impossible not to visit the exhibit and make some connections to things happening today," Johnson said. "It shows how a photographer can assume the role of activist to try to instigate social change."

When the Great Depression hit, Lange had only to look outside the windows of her studio in downtown San Francisco for subjects. One of her earliest and most recognized works is "White Angel Breadline," showing a lone man with a tin cup facing away from a San Francisco soup kitchen in 1933.

Her most famous photograph was of 32-year-old Florence Owens Thompson, a mother of seven, at a pea pickers' camp in the town of Nipomo, near the California coast.

An exhausted Lange was driving from Southern California to her home in Berkeley when she stumbled upon the family. Thompson had just sold her tires so her family could eat. She was sitting in a tent with her children, a baby at her breast.

The Lange exhibit includes six other pictures made just before "Migrant Mother."

The major themes of the Lange exhibit are the Great Depression, the home front during WWII, and urban decline and postwar sprawl in California.

Lange was known as a photographer of great empathy, someone who spent time with her subjects and took meticulous notes of their lives for detailed photo captions.

Lange lived most of her life in liberal Berkeley. She battled the effects of polio, which she contracted at age 7, for the last two decades of her life and died of esophageal cancer in 1965.

Visitors have a chance to hear from Lange herself, in segments of a 2014 documentary by Lange's granddaughter Dyanna Taylor.

"In every direction that you look, the camera is a powerful instrument by saying to the world, 'This is the way it is. Look at it, look at it!'" she said.

The exhibit runs through Aug. 13.