Three artists in quest for identity At Kasa Gallery 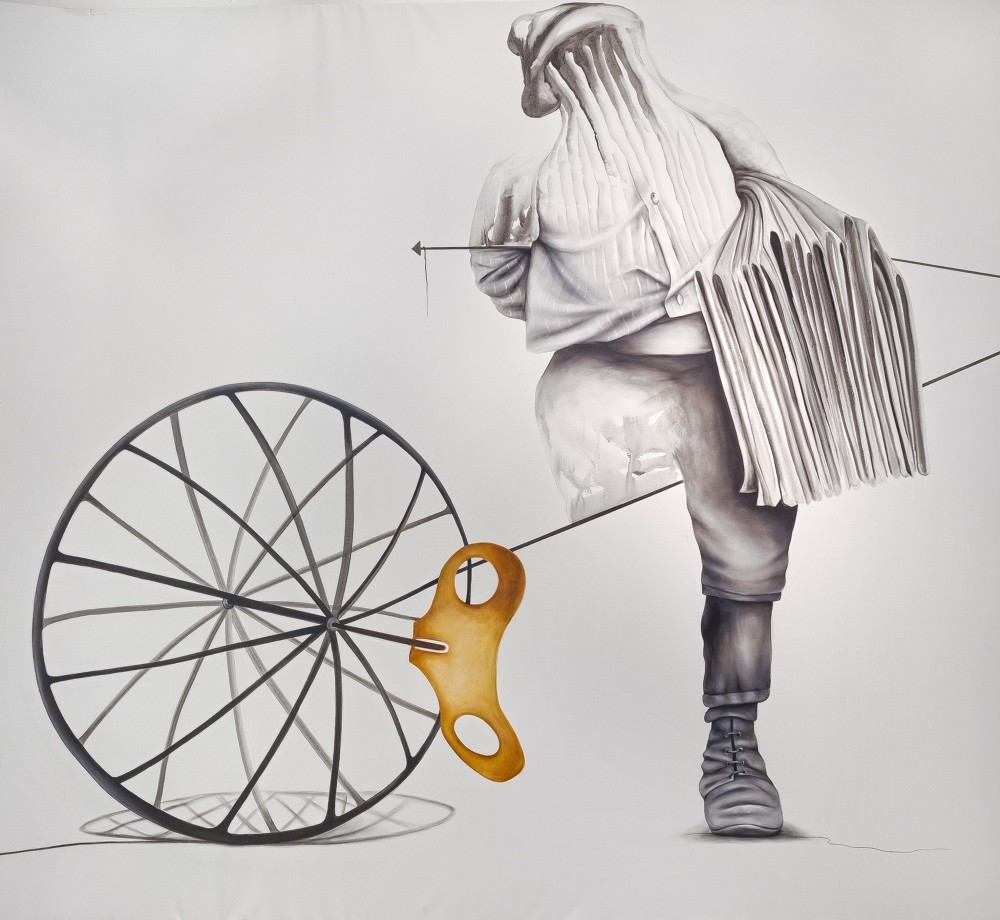 Three artists in quest for identity At Kasa Gallery

The dimly lit face of a young woman looks at the viewer from the canvas, her left hand holding a candle, the other hand reaching forward as if searching for something in the dark. The image's uncanny point of view puts the audience inside the shoes of the woman whose hands they accept as their own. And it is purportedly their face on the other side of the painting where a mirror reflects the image in reverse. The flames, the hands, the arms, all find their doubles on the mirror, but for the face. Eventually the image asks viewers to imagine themselves as that woman. Hande Varsat's subtly conceived work greets visitors to "What Story?" the intriguingly titled summer exhibition at Istanbul's Kasa Gallery.

When I visited the show on a weekday in June, the emptiness of the gallery somehow added to the intensity of Varsat's painting. Kasa had been used as a vault in the past; guards open the gallery's heavy doors to allow visitors inside. Once you make your way downstairs, to that cool basement, a refreshing feeling of being locked away from the city starts dictating your movements. The physical world sinks into the background, opening a new, liberated space for the world of the mind.

"It is supposed that events, facts, and acts are presented to us via words, images, and sounds from a certain perspective, a perspective that basically contains two aspects, physical and mental," the show's curators say in the exhibition catalogue. "The distance of the narrator and listener to the narrated story also has two aspects, whereas the story, with its being, has the ability to form a reproduction of the real world." The curators wonder if the artistic act can be defined as a product of the narrative or is the act of narration itself. 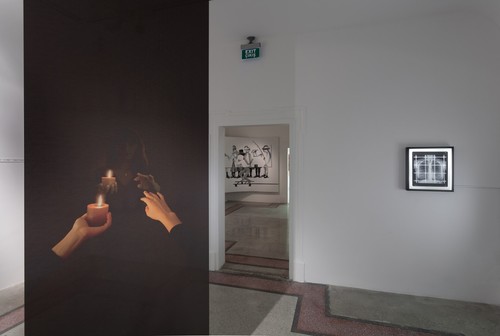 The protagonist of Hande Varsat's "No Name Self Portrait"is locked inside a world of mirrors, where the attempt to find the self leads to that large prison house of individuality.

"Can artistic production narrate a story? Can it be eager to incorporate the viewer to the story it narrates? Or, can it go beyond the word and tell visual stories in which common knowledge, accumulation, shared experience is conveyed?" they ask.

Varsat's photo installations, "Cage," "Unnamed auto-portrait" and "Leave my dreams to me" are autobiographical attempts at exploring these themes. In the first work, the 34-year-old artist places radiography images of a chest inside a cage. Her representation of bodies as cages of the soul compliments "No name self-portrait" whose protagonist is locked inside a world of mirrors, where the attempt to find the self leads to that large prison house of individuality.

"Leave my dreams to me," a work made up of match sticks on lace ribbon, is a fragile work whose simplicity brings to mind Turkish artist Cevdet Erek's "ruler" series. Here, the tips of Varsat's matches expose themselves from the lace ribbon in the cryptic form of the Morse code, telling a story waiting to be deciphered.

Varsat is a graudate of Sabancı University's Visual Arts and Visual Communication program. After completing her MA at Universidad Politecnica de Valencia's Artistic Production department in 2009, Varsat showed her work at Istanbul's Gallery Apel, the Kunsthaus Centre PasuArt in Biel and at the 15th Biennale of Young Artists from Europe and the Mediterranean in Thessaloniki. Varsat comes from a traditional Turkish family, but has spent her youth in American and European schools. Her work, according to Kasa Gallery's curators, "derives from her sociocultural experience and her own contradictions."

Meltem Işık, also a graduate of Sabancı University's Department of Visual Arts, holds a degree from New York's Fashion Institute of Technology. She explores the theme of self-representation in her work "Once more in the same river." This large print (with the striking dimensions of 550x206 cm) features a woman reclining on the floor. We watch her as she tries to view her body from quite an uncomfortable position while holding another image of her body, on her body. That image, representing an image of the body, helps us inspect her body and its representation in the same instance.

"This is a work that questions how we see and conceive," the curators say. "It is organized around the double aspect of the body that sees and is seen; around the impossibility of the human to see herself as a whole without the help of external tools. Işık, while observing living, breathing bodies as three dimensional works, thinks about her gaze to herself, a body she can never see a whole. She desperately tries to document bodies by means of photographs to be able to deal with their temporariness."

The Tehran born visual artist Aras Seddigh shows two acrylic works on canvas in the show. Titled "Vigilance I" and "Vigilance II", they offer a rather surrealist view of the world through hybrid figures who had been integrated into the objects that fascinate them: The man on the bicycle, the politician on the podium, the boy who fishes over the Galata bridge, all have been melted into the tools they use for daily purposes.

With this work, "the artist creates stories in which the real and the fictional are intertwined," the curators say. Seddigh also offers a set of questions to visitors: "At which point can reality be constructed? How much can the interaction between fiction and reality be felt in an art work?" Just like Varsat's self-portrait, this is an experiment in self-representation and an inquiry into the constructed quality of individuality that will probably leave viewers questioning the most fundamental aspects of their existence.