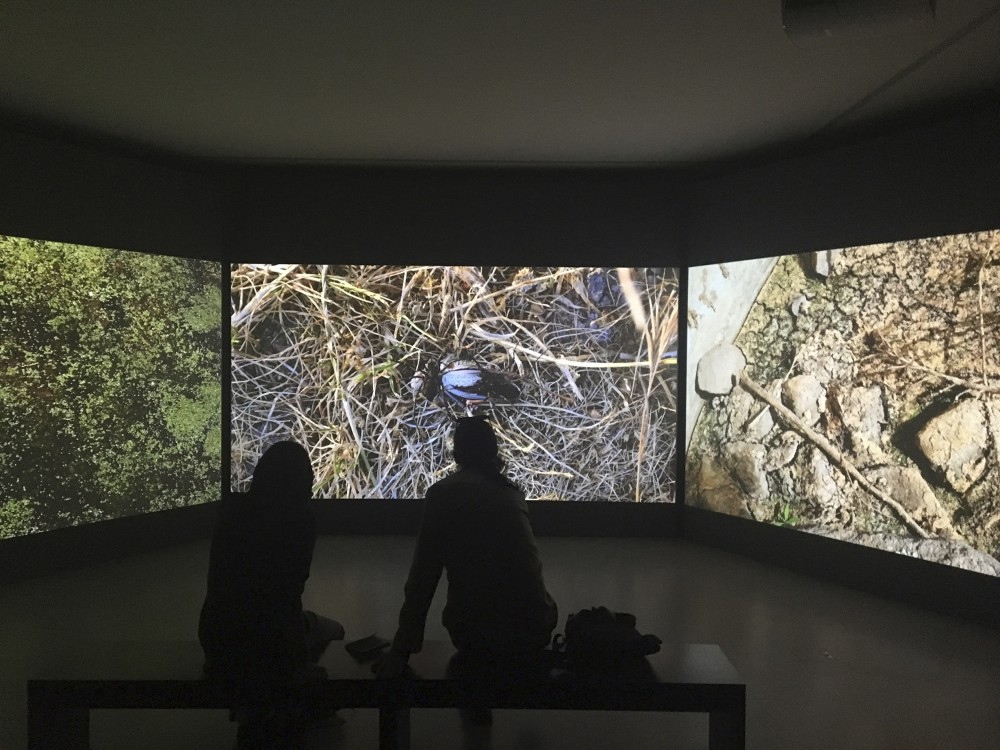 The story of ‘Isle' by Ali Mahmut Demirel begins like the famous haiku about a frog, a pond and the sound of water, and then descends into a deserted otherworld. The visual symphony of four movements, spun by the wheels of creation, destruction, preservation and nothingness is at Arter Gallery

Labyrinthine walls on the third floor at Arter rise and fall like waves from the invisible depths of an ocean, where sightless creatures disappear in the mists of an underworld abyss. They are the works of Ali Mahmut Demirel, emerging through the darkness as newly discovered beings slowly moving against the ground into his field of vision with a timeless presence. Instinct-driven, half-blind seers wind through bulbous, contoured dividers specially constructed for the exhibition space housed within a historic residence on İstiklal Avenue since transformed into a space out of time, now wholly divorced from the storied precedence of its surroundings. Demirel has such an effect as a man educated in nuclear engineering and architecture in Berlin with a mind for "Post-Apocalyptic Utopias." It's the name of his series that culminated in a video, "The Pier" (2015), one of the most praised and accomplished of his four video works at the "Isle" exhibition showing till July 15 under the roof of one of Istanbul's most prestigious and well-funded private galleries supported by the philanthropic Vehbi Koç Foundation. 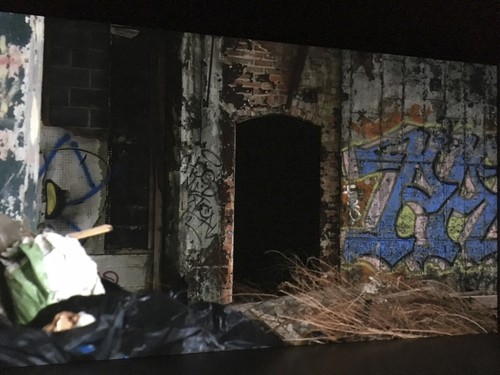 "The Plant" (2018) is a 15-minute 4K video by Ali Mahmut Demirel that further explores the overlap where land meets water, history meets the present and widens the gap toward a close look into the dimmest parts of creation.

On a deserted "Isle"

The Pier" is a uniquely inspired cinematographic adaptation of an enigmatic Dutch waterscape known as Scheveningen Pier, a national relic of runaway dereliction and hopeless perpetuation, akin to an overly cured and dried, frozen and bottled substance, though long beloved by the people of the Netherlands, recurring in cult films and books. Down a narrowing hall lit with a single, dim grey light, "The Pier" is projected behind a black curtain in a dedicated room where people first lose everyday reason and then themselves to the wonder struck gaze. In perpetual though tasteful slow motion, a lone wave crashes over a fog-cast sea. In the eye of Demirel, the crest of ocean water gains character, as the protagonist-hero of a nonlinear narrative that speaks from a man-made "Isle." Demirel has a filmmaker's steady hand, as his videos are rhythmically edited and timed to the rush of a symphonic, noise soundtrack by Biosphere, drenching the ears of his followers over an entrancing array of stylized multimedia designs austerely woven into shifting, unpeopled scenes. "The Pier" gives the sea personality, as a force that would drown all in its wake without a thought and with a touch of acquired beauty, after a ripple smeared in foam.

The waters around "The Pier" approach like an inhuman march, a neutral party with a force greater than any enemy, and totally unallied. Then, as out of a Kubrick film, "The Pier" itself appears as a bastion of human power and also as a metaphor of human isolation from nature. Humanity and nature represent two parallel, independent paths through the world. Often, and especially nowadays, they collide. Mostly, as in the preindustrial past, they coexist, as does land and water. An island is the perfect image of that imperfect dualism where one sides needs the other, while its opposite does not, being entirely self-sufficient. And as the sea rusts the columned foundation of the Scheveningen Pier, it is increasingly obvious that however high and mighty the inventions and constructions of humanity may feel to those on land, they are, in fact, fully encompassed and defined by a lower, earlier form of worldly existence. In the process, nature destroys itself to create anew, with a magician's skill enough to expose the thought of physical death as mere illusion, because everything passes, and nothing truly exists in the purest mode of objective thinking.

The video art of Demirel is a bold reminder, particularly for thoughtful residents of Istanbul, that the reason city-dwellers are inundated with construction is fundamentally due to the basic transience of the world, that anything that can be called a thing will eventually fall away, mold and turn to dust, trailing off as in a forgotten dream. Poised with a mind for renewability and longevity, the endless battering concrete and grinding glass of the city contrasts frustratingly with expectations of youth and eternity, paradise and utopia. Yet, the artist thrives where disintegration prevails. As the original Gonzo journalist Hunter Thompson said: "When the going gets weird, the weird turn pro." Originality is born in the creation of space, the dissolution of time, otherwise termed destruction and loss from other more inhibited perspectives. Diversity breathes where what is beautiful becomes ugly and vice versa."The Pier" has the mood of a mystery thriller, though abstracted and devoid of plot. A lone bird steps ashore. A fly dies in a mass grave of insects at a cobwebbed windowsill. The last whispers of life on the island are breathed by a mosquito, unaffected by the corpses of its kind against an unwashed window. In the eye of Demirel, the mosquito is a mystical being, as it climbs up the dirtied glass searchingly, and then fades out in a smooth transition back to the slow-motion whitecaps churning up foam from the discolored seawater rushing from the shallows only to be plowed over by oncoming waves. Lastly, the setting sun peers through the overcast sky, and a cross of metal darkens against the "Isle" on the eve of night like the stare of a lonely cyclops looking back at its only and imaginary friend far away and up above in the untouchable firmament. 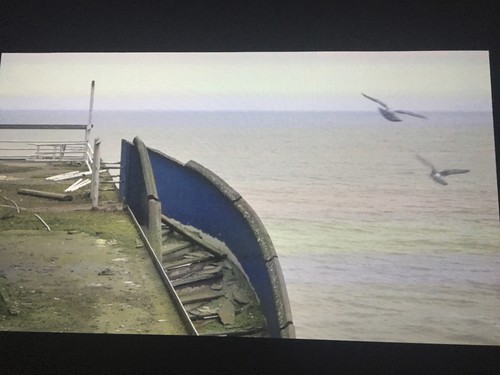 A stunning array of inspired, original angles and perspectives have been captured by Ali Mahmut Demirel with artful precision in "The Pier" (2015).

Entering the shadowy, ink-hued air of "Isle" is a 3-channel 4K video, titled "The Pit" (2017). It is a triptych depicting the winter, spring and summer in the life of a stagnant pool of water, set to an electronic buzz of a landscaped soundtrack by Carlota Marques. Its double, contrasting effects overlap through a fusion of undercurrents, flitting with subtle technical alterations and hyper-real naturalism for a hypnotizing 6'45." Beneath and along, over top and beside, the air is still, while the waters below flow with the unpredictable and erratic strength of life. It begins with a wide frame capturing the scope of "The Pit" and then infiltrates the slightest detail, from the grass and rushes rustling in the wind, to a motionless frog, slowed together with the stone enclosure beset by the raw decay of vegetation. The liquid earth amasses and coagulates in a soup of time as the ants carry the dead through the hot, dry season that changes back to winter like the shifting of ghosts in a half-dead environment.

Marques tugs at the ear with his ambient sounds, mixing in the muffled howl of a country road where exhaust engines are loosed amid cricket ticks and avian calls. A pair of spiders feed on a multicolored locust. Pods of moss float and collect on the tepid waters, grazed by an unsettling swarm of roaming flies, and workaday ants. Patiently, the camera works its way in from the desolate steps into an abandoned pool, stale in winter, overgrown in spring, brittle in summer. Islands of stone, of growth, and of litter cover the natural cycles of creation with its inborn destruction. Nature is left to fend for itself, to survive astray and marooned. No rules apply except the hardest and most banal, that of evolution on a shoestring. Ultimately, by the end of the video, summer fades, then winter, until spring remains to hear the last laugh of the universe, standing in the water of "The Pit" where a heart-shaped, vegetal organism remains, swamped in a bright emerald ecology. Demirel here points to the harshest truth of existence, though out of focus and with a sideways glance that invites unorthodox interpretations. He has a peerless, gifted eye, likened to a special breed of artists, thinkers and actors who know not to look straight at the shocking and beautiful reality and its union of opposites, the ugly beauty, so as not to overexpose its sheer presence, instead accepting that it is also a force of life and that it will come from within.

The most recent piece at "Isle" is a 15-minute, 4K video titled, "The Plant" (2018) with a powerful, minimalist soundtrack by TV Victor. Inside a small projection room down a corridor subdividing the four works of the exhibition so as not to intersect the light and music of its respective visions, insightfully curated by Başak Doğa Temür, "The Plant" spotlights the extreme neglect of a broken infrastructure, beyond all hope of restoration. Unrecognizable and abstract from any trace of its original state as a functional space, randomized elements commingle. Bedding wire, construction rails, concrete columns, graphitized walls stand at the mercy of toxic puddles that flicker with raindrops covered in trash. Skeletal buildings shelter cracked brick and piled tires, yet through the lens of Demirel, they appear with a highly visceral elegance. He has a cinematic sensibility, as a storyteller of the moving image with an eye for the dangling vertigo of life on the edge of existence. "Isle" is a pioneering archaeology of modernism at the crest of the latest wave of contemporary art in Turkey.