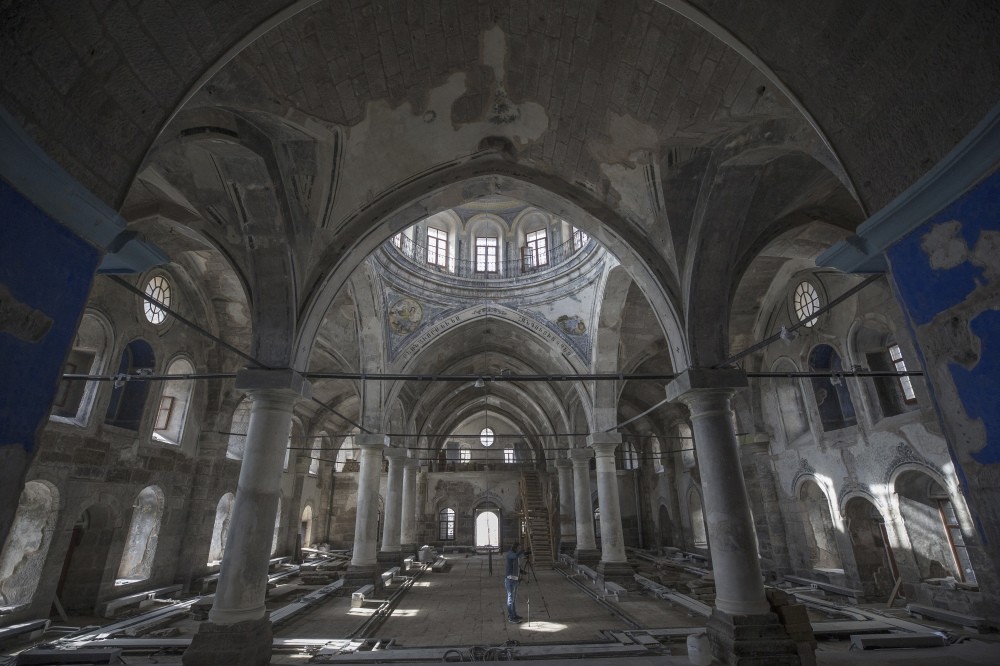 Built between 1835 and 1838 in the historic Kiu00e7ikapu0131 district of Kayseri, the church was active until World War I. After the war, the structure was used as a warehouse, exhibition hall, municipal police station and gym over the years.
by Anadolu Agency Nov 01, 2018 12:00 am

Built in 1838 in the Kiçikapı district of Kayseri province, Virgin Mary Church was abandoned for years until recently when the city's metropolitan municipality organized a detailed restoration of the structure. It will now be reopened as a 24/7 reference library

Dating back to the 19th century and featuring a Turkish flag pattern on its epitaph, Virgin Mary Church in Kayseri province went unused for years until a recent restoration breathed life back into the once spiritual structure.

Built between 1835 and 1838 in the historic Kiçikapı district of Kayseri, the church was active until World War I. After the war, the structure was used as a warehouse, exhibition hall, municipal police station and gym over the years.

Located within the bailey of the city, the church underwent so many changes that the original structure lost its originality; however, after sitting empty for years, the church's restoration was launched by Kayseri Metropolitan Municipality for 25 years with a protocol announced in 2012.

The restoration process has allowed the original layer of the structure to be uncovered by removing layers of modern plaster and paint. At the end of the meticulous restoration, steps were also taken to preserve the structure's original frescoes and friezes.

With the restoration project almost complete, Kayseri Metropolitan Municipality has plans to open the church to serve as part of the cultural life of the city in its original form as a 24/7 reference library.

Speaking to Anadolu Agency (AA), Kayseri Metropolitan Mayor Mustafa Çelik stated that they initiated the project to include the church in the cultural life of Kayseri. 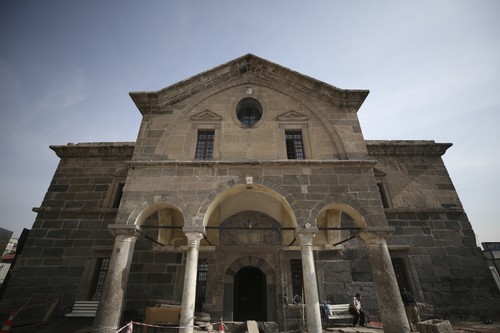 Kayseri Metropolitan Municipality has plans to open the church as a 24/7 reference library to serve the cultural life of the city in its original form.

After years of extensive research, the municipality decided that the most suitable function for the mystical energy of the structure would be to make it into a library. "Thinking that it will be the best for the church to serve the cultural life of the city, we decided to offer Virgin Mary Church as a reference library 24/7," said Çelik.

Stating that it will be an important city library for Kayseri thanks to the mystical atmosphere of the structure, Çelik added: "Our project was verified by the Board of Cultural Heritage Preservation. As seen on its epitaph, Virgin Mary Church dates to the year 1838. We have an approximate area of 1,000 square meters in the interior section. After the recent arrangement, the church will be transformed into a library with 200 seats. Serving as a 24/7 reference library, it will also offer internet and digital library services. Consequently, its new form will be compatible with the church's mystical energy. Since the restoration is done, we started working on displays and regulations, which will take two or three months to complete. At the latest, the library will be opened in the early months of next year."

Çelik noted that they carried out new projects in the context of library science and said: "We set out to transform Kayseri into a reading city. As the central library built next to the metropolitan municipality has attracted a great deal of attention from the youth, we immediately constructed two more libraries. In the end, we wanted to crown our projects in the area by restoring this church and offering it as a library. It will be a reference library specifically catering to university, M.A. and doctorate students. It will be home to 50,000 books, mostly reference. As a requirement of contemporary librarianship, the library will offer food and beverage venues as well."

Çelik also noted that another new library is in the works with the cooperation of the Metropolitan Municipality, Talas Municipality and Erciyes University.