Zafer Malkou00e7 emphasizes the loneliness of people living in a metropolis. While figures are in motion in his works, there is inertia that impresses the viewers.
by Daily Sabah Nov 22, 2018 12:00 am

Zafer Malkoç is a fast-rising star in art circles and will be opening his solo exhibition in Ankara today. A selection of the artist's work focusing on themes like the relationship between individuals and society, the commodification of women and loneliness will be on display

A solo exhibition by young artist Zafer Malkoç opens today at Arda Art Gallery in Ankara. The basis of Malkoç's work is man. He perceives humans with their past and the future, their suppressed feelings and fears and thus, his works show integrity in this respect. No matter how different the technique, the color, the subject or the figure, the artist tries to confront man with himself and his fears.

Malkoç's first series "Modern People" takes his impressions from the streets of Istanbul to the canvas. In this series, he uses his own photographs and emphasizes the loneliness of people living in a metropolis. While figures are in motion in his works, there is inertia that impresses the viewers. This inertia evokes monotony created by the fact that the individuals living in big cities cannot be alone; they aren't themselves and are in a constant repetitive hustle. While there are details in the figures, there are no details regarding space. While the colors of the figures are significant to point out character and social status, more faded colors are used for spaces. Yet, space stands out as if to highlight the imprisonment of men. 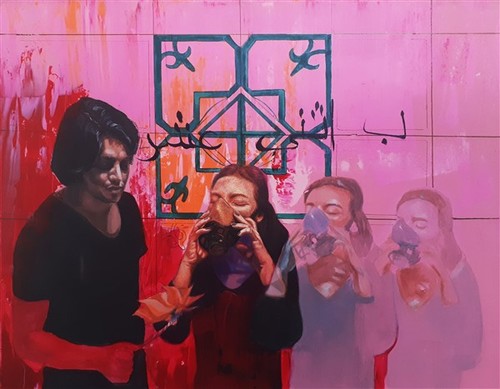 Gas masks are the expression of the need to breathe from social and economical stress.

His "Piece of Meat," series resembles baroque painting styles and is centered on female figures. Here the artist deals with the commodification of women. Symbolizing the physical and psychological violence on women through the symbolic use of wires, the artist reflects the violence onto the canvas with a critical perspective.

In his "Numbed Bodies" and "Red Imperialists" series his dark background is replaced by space and the dominance of red becomes evident. The space disappears and turns into emptiness. There is fragmentation in these works where movement is at the forefront.

Malkoç's "Red Imperialists" series reminds us of Anton Giulio Bragaglia's "Photodynamic Portraits," where different stages of the movement of a figure in front of black or dark backgrounds are shown in irregular intervals and includes portraits of well-known figures. It is the reflection of the individual facing their past, future, reality and fears through reproduced and fragmented images. The movements, the looks of the figures and the wires surrounding the individual, which are formed by the divisional technique, create a dark atmosphere yet the colorful fish scattered randomly on the canvas give hope.

The "B12" series focuses on the relationship between the individual and society in a broader context. As we know, vitamin B12 deficiency can cause memory loss as well as many psychological and physiological disorders. Malkoç bases his series on this fact and tackles an individual's relationship with the society and authority, how they are forced into loneliness through economic and sociological reasons; how they are forced to forget and how social memory is destroyed by authority. The black background in these works notes how social memory is blackened and the gas masks are the expression of the need to breathe. In this series, the symbol of hope, the fish, are replaced by calligraphic drawings in striking colors.

The exhibition will run until Dec. 14.