Artwork by Syrian women living in Turkey on display 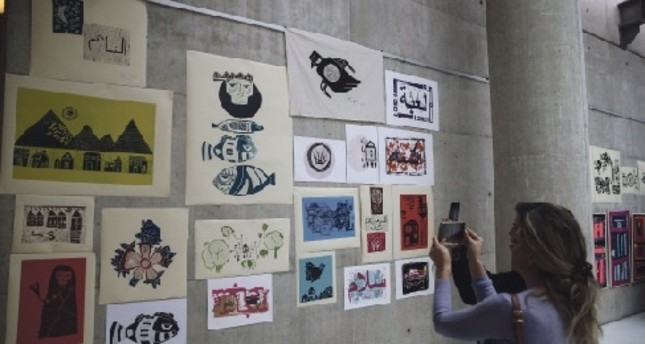 An exhibition featuring artworks by 12 Syrian women showing their experiences opened in the Turkish capital Ankara on Wednesday.

The exhibition at CerModern Gallery opened following a three-month experimental project conducted as part of the EU's Emergency Social Safety Net (ESSN) cash assistance program for refugees, according to a statement from the EU delegation in Turkey.

"In the 'Umudun Renkleri' ['Colors of Hope'] initiative, 12 Syrian women learned art techniques from Turkish instructors and then used the techniques to create works reflecting their experiences of fleeing the war in Syria and seeking safety in Turkey," the statement said.

During the project – implemented by the U.N. World Food Program (WFP), the Turkish Red Crescent and the Turkish government – the women learned serigraphy, patchwork and linocut techniques.

Speaking at the opening event, Nils Grede, WFP representative in Turkey, said: "The works on display here offer a window into the emotional journey that these women have undertaken since becoming refugees."

"The fact that they were even able to take part in this project shows that, with the help of all of us, they have regained a certain stability in their lives," Grede added.

"The assistance program that we implement with the ESSN card (Kizilaykart) preserves the dignity of people in need and has become a pilot project in the world," Deputy General Director of the Turkish Red Crescent, Alper Kucuk, was quoted as saying in the statement.

"Refugees have the freedom to buy what they need. The happiness of a mother who has a chance to cook what her children want to eat at dinner cannot be described," Kucuk added.

Kucuk said that around 1.5 million refugees are currently supported by the project.

She said: "With nearly 1 billion euros in EU funding, the ESSN is improving lives of the refugees and their host communities in Turkey."

"By covering the basic needs of the refugees, the ESSN program improves the living conditions of the refugees in Turkey and allows them to also engage in social activities," Amaral added.

Feride, one of the women involved in the project, told Anadolu Agency (AA) that she came to Turkey from Aleppo, Syria, in 2015 and that she joined the project in September.

Feride said she loves the color green and used it in her project, because it reminded her of her balcony and flowers back home in Aleppo. She said her project reflected her hopes for the future.

Another Syrian woman is Hanan from the civil-war-torn country's west-central city of Hama. She described Turkey as her second home.

"This project has helped us to forget the conflicted, dark days in Syria," she said.

Salha, another Syrian woman, whose works are displayed as part of the exhibition, said: "Producing this art helped me come to terms with the past and to move on from those experiences."

"The Umudun Renkleri initiative is a pilot project aimed at helping refugees to use art as a way of dealing with their experiences and of moving on mentally," according to the statement.

"At the same time, the project and the exhibition are intended as a tool for fostering a better understanding of the refugee community in Turkey," it added. Turkey hosts more Syrian refugees than any other country in the world. The country has spent more than $32 billion from its own national resources for helping and sheltering refugees since the beginning of the Syrian civil war. The exhibition of Syrian women will be on display in Yenikapı Metro Station in Istanbul in the middle of December after launching in Ankara

Share on Facebook Share on Twitter
Previous in Arts Academy Award and three-time Golden Globe winner Nicole Kidman is... Next in Arts "Open Studio: Sinem Dişli" is an event that will take place at The...
DAILY SABAH RECOMMENDS