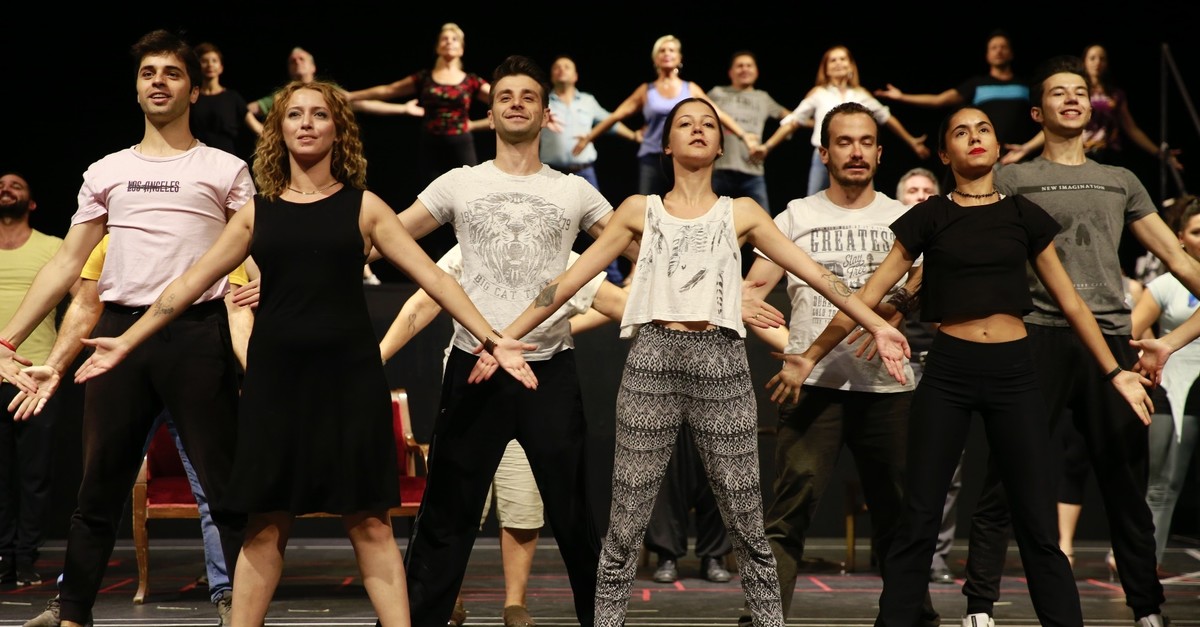 One of the most popular works of theater history, Cemal Reşit Rey's "Luxurious Life" musical, written in 1933, is preparing to meet with the audience for the first time at the State Theaters (DT).

The master theater actor Murat Atak is the director of "Luxurious Life," which the Ankara State Theater will present to art lovers in the 2019-20 season. The play will premiere at Cüneyt Gökçer Stage on Oct. 5.

Atak talked about their work with an Anadolu Agency (AA) reporter. He noted that he has directed over 60 works in 12 regions at the State Opera and Ballet. However, he also emphasized that "Luxurious Life," which will be staged for the first time in the "State Theaters," has a special place for him.

"It is a successful, pleasant work. We are welcoming all our viewers. When this work was written in 1933, Cemal Reşit Rey was also writing the '10th Year March.' He was juggling both jobs. There were many acquisitions on the 10th year of the Republic but the admiration for the West was continuing. This admiration continues with balls and Western life styles. The play addresses two different groups, one living in luxury and the other in distress. We can see examples of these experiences in the play," Atak said.

He also noted that the play has not changed much since 1933, just as it is depicted in the play, some people live in luxury while other live in debt today.

Atak added that it is a pretty operetta. They are dealing with a piece written for a whole orchestra. He further noted that he was pleased to act as the director of the play. Mustafa Kurt, DT's general manager, said that he said "yes" without thinking when he was offered to be the production director of the play.

Recalling that "Luxurious Life" was staged at Istanbul City Theaters and Eskişehir City Theaters but never at DT, Atak added that there are many important actors and actresses working for the play.

"The discipline of our actors and their determination to work are so strong that sometimes the discipline and backstage manners can prevent dance, singing and other talents. We are very lucky in this sense. We work with both talented and multidisciplinary people. We are in a great working environment. When we enjoy it, the audience will also enjoy it," he continued.

Atak mentioned that they are working with actors and actresses who have been taught by other great talents who worked at classics such as "My Fair Lady," and "Fiddler on the Roof." "I'm trying to add Turkish theater elements to the play. We just don't want to perform for the Ankara audience but also on all other stages," Atak said and added that more than 65 actors and actresses gave their hearts to the play and more than 150 people supported the play with their efforts.

The costume designs were made by İnci Kangal Özgür and Sertel Çetiner designed the lighting. "Sertel Çetiner is a master decorator. We prepared a revolving stage. Mansions, kiosks, ballrooms will appear as the stage turns, we are preparing a great decoration," Atak added.

'Theater is a stage of specials'

Atak knows the stage and the lighting, as he has also directed the first play performed on Cüneyt Gökçer Stage.

"Some viewers call the little sketches and the humorous programs on TV theater. However, theater is a stage of the privates. Everyone can play on TV. Your upstairs neighbor and rooster can be on those clips. However, it's not everyone's call to play at State Theaters. We are working with the claim that this will be one of this year's most prestigious plays of this season."

Tango, waltz in the play

Ömür Uyanık, the choreographer of the play, emphasized that the musical of "Luxurious Life" is a chance for him. "I am very excited. My team is so beautiful. I'm thinking of just serving the play. The play has a character and these moves I'll give to the characters of the play have to be in line with that period and what I can manage," Uyanık noted.

Playing Rıza in the play, Levent Çelmen stated that the text is plain and they are trying to make the play in line with what the audience in 1933 would want to watch. He further noted that they worked for more than nine hours for the rehearsals. "Our music, stage and dance works continue. My role is quite intense in terms of the number of stages and songs. I'm going through a process that I love but I find it hard to deal with. Each role is actually like this and I remember these days with love," said Çelmen.

"Luxurious Life" starts with Rıza and Fıstık, who make a living for themselves with small thefts, finding themselves at a masquerade when they enter a rich house.

This new environment, which the duo falls into, reflects the situation of the people who are in admiration of the West. Their lives, in which contractions become clear, cause many funny events and the play is presented with rich content in which music and dance are intertwined.