Archive show tells story of Hristoff family together with Istanbul 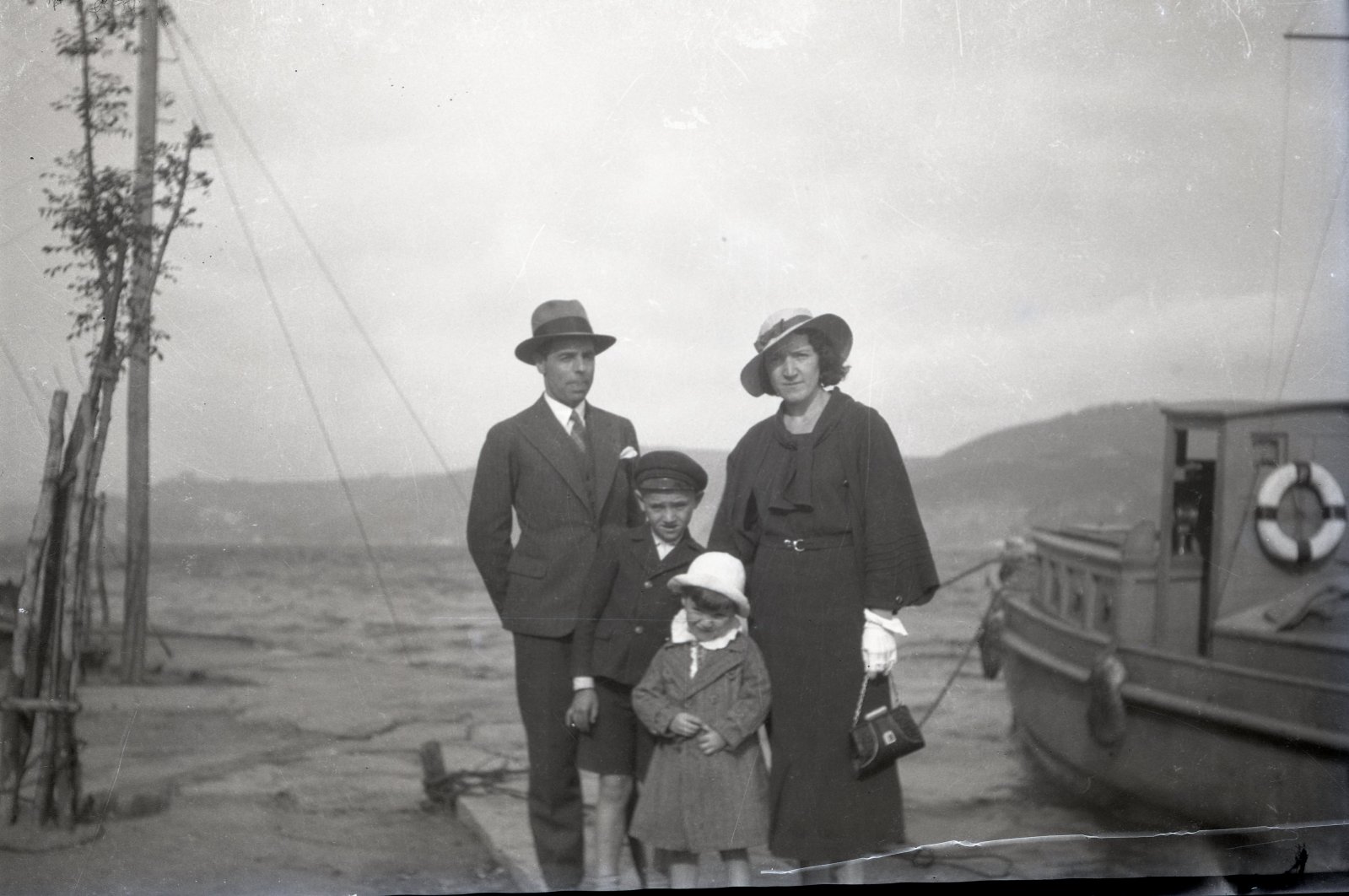 The habit of collecting started by Peter Dimiter, who was at the center of the art scene of the first years of the Republic, was continued by his son Dimiter and his grandson Peter. Postcards, paintings, ephemera and photographs in their archive, which are displayed at an exhibition in Istanbul now, tell the story of their family, blended with nostalgia and sentimentality, with their city

While the objects we collect and value reflect our pleasures and interests, our history and our existence, they also mediate the telling of our family heritage and stories. These memories, which are valuable for us materially and spiritually, also prove that we are here.

The new exhibition of the Yapı Kredi Culture Arts and Publishing (YKKSY) complex on Istiklal Street is a journey into the memory of a family of three generations of artists over hundred years. "Memento Istanbul: Hristoff Family Archive" tells the heritage and stories of this family through photos, paintings and items that the household holds dear.

Curated by artist Peter Hristoff, who is also a member of the exhibition's family, together with Elif Erdoğan and Yeşim Demir Pröhl, the exhibition starts with the introductory video of Peter on the second floor of the Yapı Kredi complex. Following the video, which offers an insight into the experience of "Memento Istanbul: Hristoff Family Archive," the part dedicated to Peter Dimiter Hristoff, the first generation of the family, directly welcomes visitors.

Nicknamed Tushe, Peter Dimiter was born in 1898 as the only child of Dimiter and Velica in Thessaloniki. Tushe's father, Dimiter, was orphaned as a baby in Kilkis and taken by a family so that he could help with the chores. He, who did not even have a name and was called "Garden Boy," decided to take "Dimiter" as his name at puberty and left the house of his guardians to live in Thessaloniki, where he immediately found a job as a clock apprentice. In the later period, Dimiter managed to enter the flourishing textile industry and received great success.

By 1990, the "Garden Boy" was married to Velica with a son named Peter and as a family man and an entrepreneur, he became the President of the Bulgarian Chamber of Commerce and Industry. However, the Balkan Wars pushed Dimiter and his son to fight for the independence of Kilkis. During the war, Velica was killed and Dimiter and Peter were imprisoned. After the father and son managed to escape from the prison, they were transported to Sofia with the help of some Turkish friends. Dimiter then married Anastasia Penuslieva Muftieva, widowed mother of three.

With the trauma of the Balkan Wars and his mother's death, Peter initially could not accept his father's second marriage and went to live with his aunt. However, during his high school years, he found a part-time job as an apprentice to a photographer. After the photographer recognized Peter's talent, he convinced him to return to his father's home and enroll in the Sofia Fine Arts Academy. Upon this advice, Peter reconciled with his father and studied printmaking with great Czech artist Josef Peter and painting with Maestro Dimitrov. During this period, Peter's political views matured and he became a member of the young anti-tsarist Agrarian Party.

After one of his friends persuaded him that he was in danger due to his political views and should leave for Istanbul. Before he left Sofia, Peter told his father that he was in love with his stepsister Viktorya and wanted to marry her. He arrived in Istanbul in 1923, and in a short time, he found a teaching job at the Bulgarian Secondary School in Kumkapı. A few months later, Dimiter put his stepdaughter Sofia on the Orient Express and sent her to Istanbul so that she could marry Peter in Istanbul.

Upon his arrival in Istanbul, Peter also painted the city en Plein air; therefore, his earliest work documenting Istanbul was through oil paintings. Then, he began clicking various photos that were somewhere between painterly and documentarily in terms of their style. The photos recorded a changing city and vestiges of its past.

As Peter was an artistic soul, the most interesting thing I learned about him was his sock factory. While Peter's father, Dimiter, was in the textile business in Sofia, he partnered with Swiss textile manufacturer Hartman Müller. After Peter's move to Istanbul, Dimiter and Müller saw the opportunities of Turkey's Industrial Promotion Law and established a sock company that Peter would manage. Though Peter was seeing the world through the eyes of an artisan, it was hard to live as a Bulgarian artist in Istanbul in those years. Therefore, Peter accepted to manage the factory and the "Ka-Bo" sock factory, employing more than 180 workers, was established in Aksaray.

After the Wealth Tax in 1942 and the Istanbul Pogrom on Sept. 6-7, Peter feared that there would be no further business opportunity for them as a minority in Istanbul. So, although he thought of moving the factory outside of the country, he finally established another factory in Bahçelieveler, renaming it "Mi-Bo," after the nicknames of his sons.

The second-generation artist of the Hristoff family was Dimiter Hristoff, named after his grandfather and known by the nickname Mitko. His mother traveled to Sofia to give birth in her parents' house. His life would go on in Sofia during his student years due to the Cold War. He was studying in Bulgaria, staying with his grandparents and going to Istanbul during the holidays.

After high school, Mitko studied at the Academy of Fine Arts and was trained in the workshops of famous artists like Ibrahim Çallı. He was a good friend of painter Bedri Rahmi Eyüboğlu, and his father's painter friends like Ali Sami Boyar and Aliye Berger grew very attached to him. Upon his graduation, Mitko received special permission to work on the grounds of Topkapı Palace.

Like his father, Peter, Mitko was also expected to fulfill his duties in the family's other business, the sock factory. However, this free-spirited young artist neglected his responsibilities, painted hundreds of paintings, and collected Byzantian coins and Greco-Roman pieces.

The third generation of the family of the artists was Peter Hristoff, also named after his grandfather and the curator himself. Born in Istanbul in 1958, Peter immigrated to New York with his family and studied at the School of Visual Arts at the Hunter College.

The artistic practice of Peter predominantly revolves around immigration and functions like a journal. His work is a record of facts, thoughts, observations and memories. Exhibiting in New York since the early 1980s and in Istanbul since 1997, his work can be found in numerous private, corporate and public collections.

The stories of the three generations of the artists are presented to viewers accompanied by some of their belongings, ephemera, photos and paintings in the exhibition. Whereas the items of the exhibition do not necessarily define the legacy of the family, the objects surely help to tell the story of the family, reminding us of their ancestry. In the exhibition, objects collected from the Hristoff Family Archive are also accompanied by paintings from the collections of Pera Museum, Rahmi Koç Museum, Yapı Kredi, Nur and Selçuk Altun, Ömer M. Koç, Emel and Bülent Korman, and Ayşegül and Ömer Özyürek. In the section where the family's ties to the art scene of the early Republican years are explained, works by Aliye Berger, Ali Sami Boyar, İbrahim Çallı, Hayri Çizel, Bedri Rahmi Eyüboğlu, Zeki Faik İzer, Zeki Kocamemi and Şerif Renkgörir are also showcased.

The common point where the Hristoff family, whose members are painters but also make prints, meet has always been Istanbul. Three generations of family artists produced their works by being influenced by the history, culture and people of Istanbul. Therefore, on the exhibition's second floor, there are works produced by Peter Hristoff inspired by Istanbul.

"Memento Istanbul: Hristoff Family Archive will run until Aug. 7 at the Yapı Kredi Culture Arts and Publishing complex. Do not miss the exhibition if you want to witness the story of the three artists in the Hristoff family and take a journey through the dusty pages of history to observe Istanbul's past!