Mevlana's clothes to be exhibited for first time after 800 years 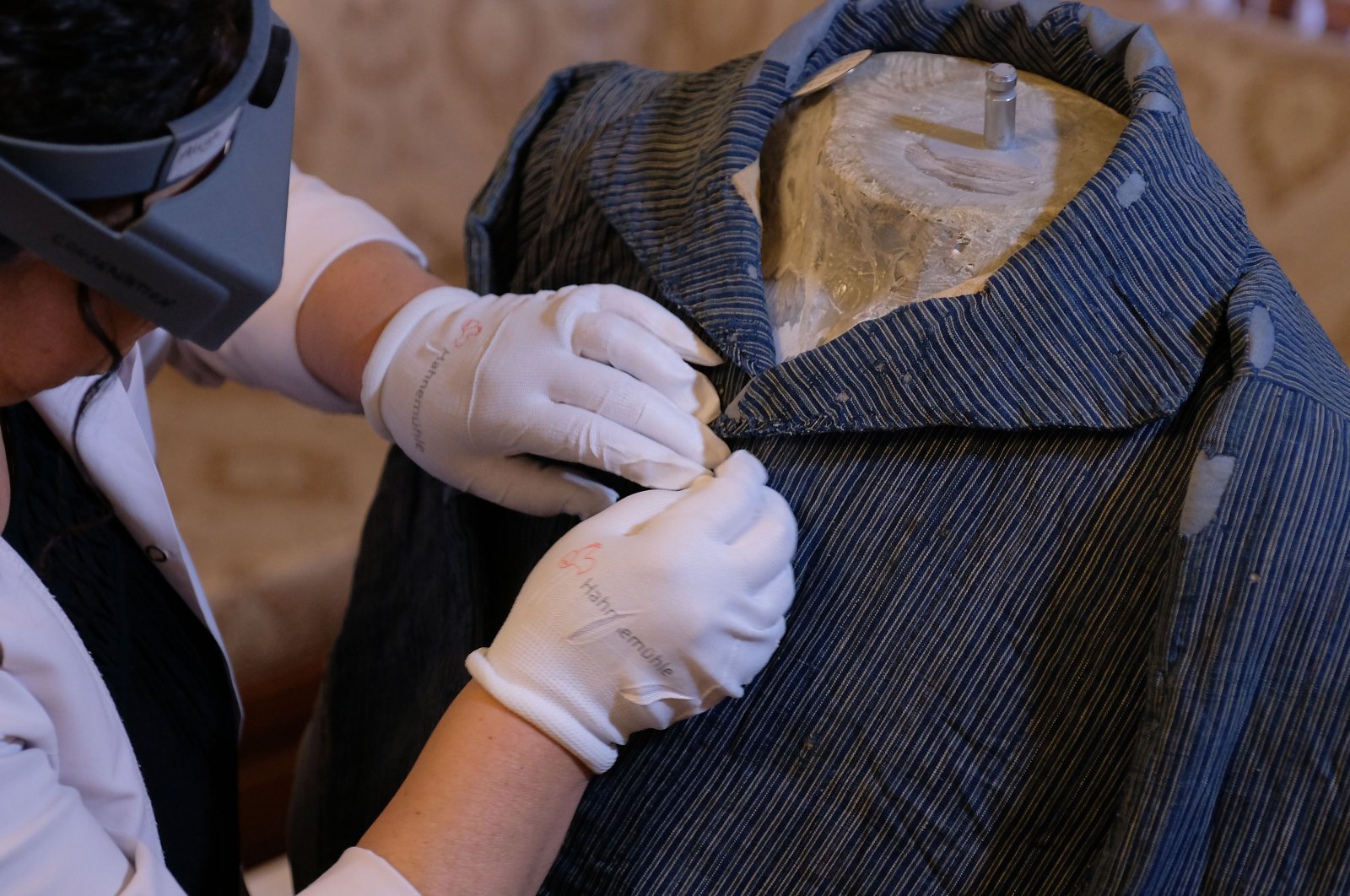 Every day, we discern from research about Mevlana Jalaluddin Rumi, one of the pioneers of universal Sufism, with his peaceful and tolerant call to far corners of the world: "Come, come again, whoever you are, come! heathen, fire worshipper or idolatrous, come!" Having been translated into many languages, his words of wisdom and unique literary style have reached every continent.

Mevlana Jalaluddin Rumi's clothes kept in special boxes for years have come to light for preservation work. A team of three people under the Mevlana Museum Directorate in Turkey's Konya, where Rumi's is also laid to rest, meticulously mends clothes made of cotton and silk.

Museum Director Dr. Naci Bakırcı said: "There are miniature paintings of Rumi made since the 18th century. These are paintings made in light of hearsay physical descriptions of him. We assume that he was tallow-faced and had colored eyes."

"The reason why these dresses were so large and full was that they were maqam dresses. We can estimate that his height was around 163 centimeters (5.3 feet) and while his weight was 60 kilograms (132 pounds)," he added.

Sufism is a mystic dimension of religious practice within Islam that strives to seek eternal happiness through inward exploration of God and rejection of materialism. Reaching its apogee with Rumi, the practices aimed for a transcendence that transcends religious doctrines. According to them, God treats everyone with tolerance, regardless of belief, while knowing and remembering are the basis of living a spiritual life. Maqams are spiritual stages in Sufism that symbolize the long path until the union with God. A Sufi strives to purify himself from earthly affairs in each maqam to reach a higher level of spirituality.

The clothes belonging to Rumi began to be restored with the permission of the Ministry of Culture and Tourism. During the preservation work, clothes belonging to Shams Tabrizi, a great poet, Rumi's spiritual instructor, and noted mystical theologian Rumi's father Baha' al-Din will also be repaired. Upon the completion of restoration work, the clothes will be presented to the museum visitors for the first time after 800 years.

Stating that 19 of the 22 clothes in the museum's collection are much worn, museum director Bakırcı said: "The collection of the museum can be described as very special. Konya dervish convent is a rare place that was converted into a museum by the decision of the Council of Ministers upon the closure of the dervish lodges and zawiyas in 1925 through the effort of secularization. From Rumi's death to today, the rich, statespersons, and Rumi followers have gifted very valuable items to this place. These were nicely stored and preserved in the dervish lodge until it became a museum."

"For example, there are 22 pieces of clothing in our collection attributed to Rumi. There are shirts, robes, and other fabric samples. These fabrics have quarreled too much. Are they from the Seljuk period? Do they belong to Rumi? Scientists and art historians have focused on this issue a lot and various publications have been made. Yet we have come across interesting publications in our recent research. Accordingly, one of the viziers of Abdulhamid II was exiled to Konya around the 1890s. His memoirs that were published recently reveal that a rare devotion existed in Rumi's lodge, which was not seen in any other dervish order. Dervishes would wear the clothes of Rumi and would pray in front of Rumi's tomb every Thursday," he added.

"Also, 1890 dated dervish inventory shows that these clothes were attributed to Rumi, Shams, Rumi's eldest son Sultan Walad, and his father. Even though 16 were worn away, they were kept in the dervish lodge for a long time as they belonged to Rumi. These clothes were distressed as they were worn every week for centuries," he said.

Stating that 12 of the 19 outfits have been restored, Bakırcı added: "We have three restorators working in our museum at the moment. They are experts in textile and weaving. We decided to restore these clothes after obtaining the necessary permission from our Ministry. Then we decided at what points the fabrics should be treated. Because the task of the museologist is to transfer these cultural assets to future generations in a healthier way."

"Almost all of the 19 fabrics needed restoration. Some of them were brought to life with small touches; the process for some of them has been going on for five months. The restoration took one year for some of the clothes. Without damaging the original form of the fabrics, they were compared with the Seljuk period. Their linings and fabric types were determined. Restorators repair these fabrics by dyeing them without damaging the essence of the fabric and without using chemicals," he said.

Stating that the clothes offer an insight into the Sufi dressing, Bakırcı said: "We only familiar with the white robes (tennure) of the whirling dervishes. Yet we did not know about tabards and coats. They are not as flamboyant as caftans (a variant of robes)."

The museum sets to open an exhibition consisting of Rumi's clothes in December.