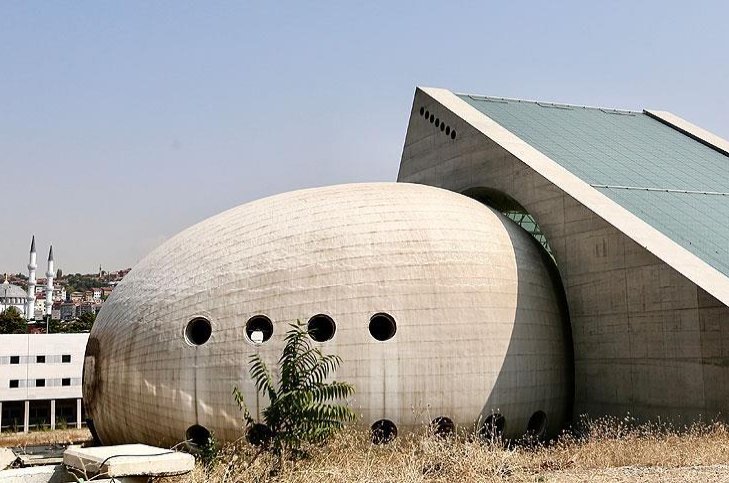 The construction of the new CSO building is nearly complete, Ankara, Turkey. (AA Photo)
by Anadolu Agency
Jun 29, 2020 11:14 am

The new and former Presidential Symphony Orchestra (CSO) buildings in the capital Ankara will be transformed into a cultural campus, and the former CSO building will be renovated soon, Culture and Tourism Minister Mehmet Nuri Ersoy said.

Pointing out that the culture and arts season begins Sept. 1, Ersoy said in an interview with Anadolu Agency (AA) that institutions that carry out culture and art events, including theaters, cinemas and concert halls, will resume operations on July 1. “A circular has been issued on this subject. They will come into service in line with certain physical distancing (rules). The institutions who serve outdoors will perhaps come into service faster, as the danger of the virus in the open air is lower,” he added.

Ersoy said the new building of CSO, one of the best-established art institutions in Turkey, has been in the works for 28 years. He noted that President Recep Tayyip Erdoğan instructed him to complete the construction when he took office. CSO is set to give its first concert at the new building on Oct. 29, he said.

Noting that he regularly inspects the construction work, Ersoy said: “I can say that we have come to an end of the construction. I inspect it regularly. The number of employees is increasing. By the end of July, our respective general directorates, including departments of the General Directorate of Fine Arts of CSO, will be moving to this building."

"While you are opening a building, this means you are launching a new concept. Therefore, this is a building that needs to be operated with a different concept. It needs to consist of people at different levels who will contribute to its development," he explained.

Indicating that the new orchestra building has a spacious garden, Ersoy said: “We are transforming this area into a cultural campus with the new and former CSO buildings. We will subject the old CSO building to restoration soon.”

Emphasizing that the area will become one of the most valuable centers of fine arts activities in Turkey, Ersoy noted that there will be cafeterias, restaurants and exhibition halls in the garden. “You will not just go to listen to CSO. Students will also be provided with training. Certain halls will be made available to universities on certain days. We are organizing it as a culture island with regular events on weekdays and weekends,” he said.