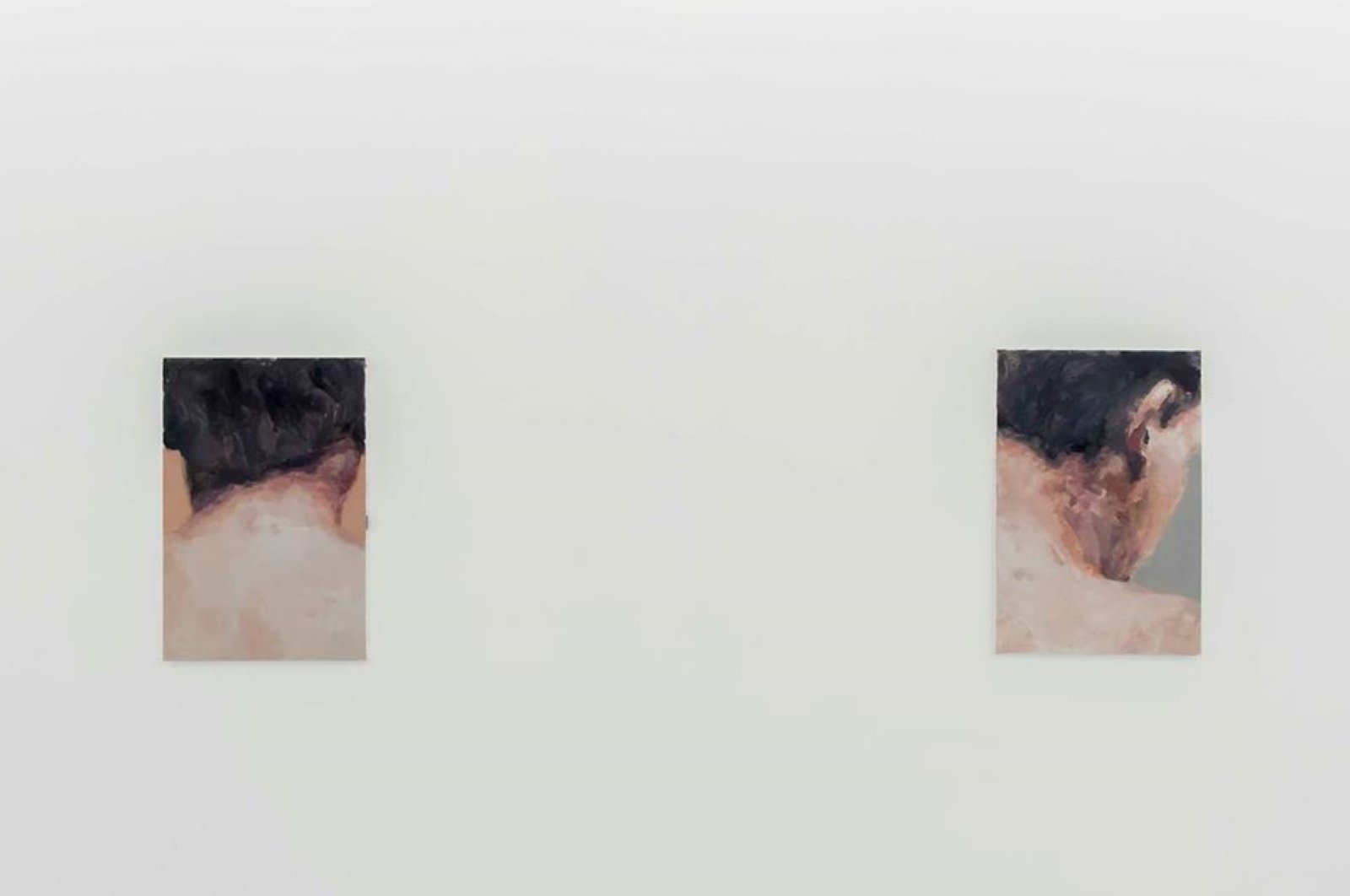 The paintings depicting merging parts of the body by Berke Doğanoğlu.
by Matt Hanson
Jun 29, 2020 12:54 pm

The first of the two-part exhibition, “As Adam, Early in the Morning,” features eight paintings by Berke Doğanoğlu at The Pill – the best-kept secret in Istanbul’s art landscape on the shores of the Golden Horn

Book four of "Leaves of Grass" by the 19th-century American poet Walt Whitman is titled, "Children of Adam" and contains some of the most brilliant, blazing lines of poetry ever written in the English language. "Was it doubted that those who corrupt their bodies conceal themselves?" Whitman poeticized in his nonpareil canto, "I Sing the Body Electric," like the bearded sage he was under his wide-brimmed hat, inking the literary ecology of the mind when the United States was riven by the twin evils of war and slavery.

Through that darkness which in many ways still casts its long, cold shadow, Whitman wrote verse empowered by the triumph of democracy as a liberation of the body. Adam, a metaphor for all of humankind as bound by kindred blood and monolithic ancestry, is just getting up as the earliest rays of sun peek over the mythical horizon of Eden. The final canto of book four in "Leaves of Grass" gleams with passages of the first-person narrative that approximate prose in their simple directness. Whitman’s voice is like Adam, audible, approaching.

He implores, "Touch me, touch the palm of your hand to my body as I pass, / Be not afraid of my body." These evocations are rapturous embraces of body-positive, early modern humanism, faithful to the principles of naturalness as good when the world around the poet and his people, which included everybody, were struck with violent terms and acts of separation, of disembodiment. But the classic poem, epic and sprawling, the result of a lifetime of meditation and craft, is gently pressing its ultimate point, that like a touch, by a hand, conveys the feeling of physical abstraction.

It is a sensation executed by the purity of visual experience, yet no less visceral, in the paintings of Berke Doğanoğlu. For the last five years, he has begun a promising oeuvre, culminating in 16 paintings that reflect the curious phenomena of that known when the sight becomes felt, and losing its form to the eye assumes novel qualities under a hand. With close, intimate perspective, Doğanoğlu frames parts of the body, blending figurative and impressionistic techniques, towards a representation of the body as a palpable abstraction.

The image at his fingertips

The shoulder is a round place, and never resolves to a point. By the neck its sensitive zones are run through with a kind of vulnerability that triggers softness, give and trust. Under the cleft of its pit is a forbidden territory wherein the scent of the individual is stored and emits involuntary reactions of attraction and repulsion. Entering the cool, blank ether of The Pill for "As Adam, Early in the Morning," a pair of paintings hang from a wall, alone together. One pictures those merging parts of the body where the shoulder and back become the neck, hair and face.

Not quite a profile, as the side of the face is left to a grayish monochrome background where the eye socket dips, before revealing the windows to the anonymous soul. What follows is more of an enigma, as the person is about-face, their back to the portraitist. In both works, Doğanoğlu darkens patches of skin toward the upper neck. The color scheme is pale, visible strokes of light purple commingle with beige and yellow before a neat head of bluish-black hair. It is a traditional craft with a contemporary twist for its evasion of facial identity, eyeless and decentered.

And coming to the second of three walls on which Doğanoğlu’s paintings hang at The Pill is a feminine figure, adorned in what might appear to be swimwear. In a clever technical play of form, Doğanoğlu demonstrates his skill for that surrealistic approach to artistic precision, particularly found in painting, when the figurative is concretely in its imagery, yet is subject to interpretation, something akin to op-art, to the extent where multiple visions of the same work are equally visible. Whether painted from the back or front becomes less important than the essence of their flesh.

With the spectrum of an aurora borealis, Doğanoğlu sets off into complete abstraction in a painting curated near the middle of the semicircular arrangement of canvases. A slow decrescendo of light purples blends like fog into a wash of warm blues and dark greens that are at once translucent and opaque. The effect is that of setting the time to predawn, when the sky is ripe for changes that appear supernatural, as from the visions of a dreamer on the verge of waking. And out of that haze of atmospheric blur, morning rests on the skin of the sleeper.

A person looking at and into the paintings of Doğanoğlu may notice a parallel narrative at play between that portrayed, and the seer behind the scenes, what might be called the artist’s gaze. Opposite the wall from the dedicated pair of paintings, a specific trio of works is conceivably the snapshots of an onlooker, a fellow sleeper whose still-tired eyes open to the sight of a body so intimate that at first, its parts blur into sketches of color and form, not unlike rough strokes of paint. Doğanoğlu’s paintings suggest that sensual perception is confined to subjective interpretation.

In a 2019 essay for The Paris Review, authors James Schuyler, Helen Frankenthaler and Douglas Dreishpoon discussed the mutual relationship between art and poetry. "Paintings, like poems, thrive on subjective associations," they wrote, in reference to a midcentury, international correspondence between practitioners of these kindred creative disciplines. Their common sources of inspiration and appreciation arguably derive from an experiential skepticism regarding the nature of objectivity, of materiality as an absolute.

Nearly two centuries apart since the first edition of "Leaves of Grass" went to press in 1855, Istanbul-based Doğanoğlu, born in 1990, has adapted the ekphrastic lines of Whitman into a series of paintings that, through sight, prompt multiple meanings out of what it means to feel, both as a metaphor for emotional response and as a synonym for the sense of touch. Doğanoğlu asks seers passing through The Pill, how might a feeling be seen? In line with such gallery artists as Leyla Gediz and Mireille Blanc, his first solo show is a welcome answer to one of art’s perennial questions.