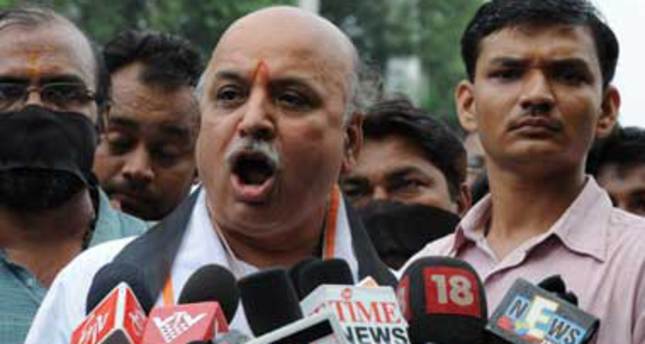 by AA
Apr 22, 2014 12:00 am
NEW DELHI — A right-wing Hindu leader was allegedly caught on camera on Monday making incendiary and hateful remarks against India's Muslim community, sparking a major political row as the country prepares for the sixth phase of the ongoing national election on Thursday.

At a gathering in Bhavnagar in the western state of Gujarat, Pravin Togadia, leader of the right-wing Hindu organization Vishwa Hindu Parishad, is seen offering advice on how to prevent Muslims from buying houses in areas where Hindus are in the majority.

"Muslims have been buying Hindu properties at throwaway prices. How do you stop this?" he asks before offering two solutions.

"We should have it in us to take the law in our own hands in an area where we are a majority and scare them," Togadia is heard as saying in the purported video clip broadcast on news channels and the video sharing site YouTube.

"You put pressure on the government to enforce the Disturbed Areas Act the way we have in cities like Ahmedabad," Togadia allegedly said.

"Some people gathered and told me that Muslims are forcibly throwing us out, I asked them to take help of the police. The story is not about Muslims getting thrown out; it is about Muslims forcing Hindus out of their houses," Togadia said on Monday.

Last week, two incidents of hate speech were reported from northern Indian state of Uttar Pradesh, the biggest and most populous state.