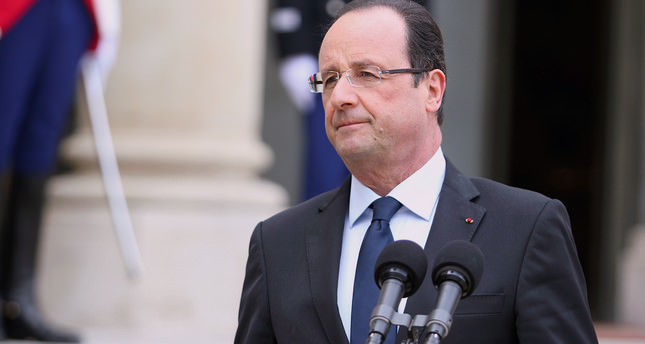 by Daily Sabah May 13, 2014 12:00 am
BAKU, Azerbaijan — France has stepped up its political relationship with Azerbaijan after the presidents of the two countries met in a bilateral conference yesterday. French President Francois Hollande met with Azerbaijani President Ilham Aliyev in the Azeri capital of Baku yesterday where he pledged his support for the ex - Soviet country.

Following their bilateral meeting, the two held a joint press conference where the French President pointed out the three main themes of the conference; the Azerbaijan-France business forum that is expected to bring 200 Azerbaijani and 90 French businessmen together, the creation of the French lyceum in Baku and the unresolved two decades long Nagorny-Karabakh conflict which threatens Azerbaijan's territorial integrity.

While being the first stop in President Hollande's three day visit to the south Caucasus, Baku is of significance for French President where European and French companies are heavily involved in the Azerbaijan's several industrial sectors.

As Azerbaijan is the leading state in the economic field in the region of Caucasus, France has given greater importance to Azerbaijan's energy sector. President Hollande is accompanied with a large delegation of businessmen to the business forum held in May 12. "Our goal is to support the development of Azerbaijani economy, in particular the energy sector.

France is also ready to support Azerbaijan's development in other areas," said the French president according to Azernews. Azerbaijan's Economy and Industry Minister Shahin Mustafayev gave a speech at the opening of the business forum by stating that the cooperation in the investment sphere between the two countries would be expected to develop significantly. "The corresponding agreement will be signed today.

Aside from that, nearly dozens of commercial agreements on Azerbaijani and French entrepreneurs' joint projects, worth billions of dollars, will be signed as part of this forum," said Mustafayev. According to the reports, France is the fifth largest foreign investor in Azerbaijan with the heavy investment close to $1 billion (TL 2.08 billion) in the energy sector.

Gas and oil groups such as TOTAL and GDF SUEZ are getting ready to take part in the exploration and development of the Absheron gas field. Apart from developing economic ties between two countries, President Hollande underscored the importance of Azerbaijan's territorial unity regarding the fruitless negotiations on resolving the Nagorny-Karabakh conflict. "The situation remains tense, and there have been tens of thousands of deaths, and recently there have been some incidents as well. So, France will do everything it possibly can in its capacity as co-chair of the Minsk Group to assist Azerbaijan and Armenia to find a peaceful solution," the French president stressed.

Supporting Azerbaijan's national unity is believed to be of the utmost importance for France and the European Union amid Ukraine crisis. The French president's visit is seen as an important step for the EU to boost the existing relations with the ex- Soviet countries that have been in the sphere of Russian influence. President Hollande continues his official trip with the next stop, Armenia where 500,000 French of Armenian origin form a political constituency. The talks over the Nagorny-Karabakh conflict are expected to continue with Armenian leaders.
RELATED TOPICS